NCAR scientist Matthew Long is a co-author of a new study appearing in Geophysical Research Letters. This is an excerpt from a news release by Georgia Tech, a UCAR member institution.

May 11, 2017 | A new analysis of decades of data on oceans across the globe has revealed that the amount of dissolved oxygen contained in the water – an important measure of ocean health – has been declining for more than 20 years.

Researchers at Georgia Institute of Technology looked at a historic dataset of ocean information stretching back more than 50 years and searched for long term trends and patterns. They found that oxygen levels started dropping in the 1980s as ocean temperatures began to climb.

“The oxygen in oceans has dynamic properties, and its concentration can change with natural climate variability,” said Taka Ito, an associate professor in Georgia Tech’s School of Earth and Atmospheric Sciences who led the research. “The important aspect of our result is that the rate of global oxygen loss appears to be exceeding the level of nature's random variability.”

The study, which was published April in Geophysical Research Letters, was sponsored by the National Science Foundation and the National Oceanic and Atmospheric Administration. The team included researchers from the National Center for Atmospheric Research, the University of Washington-Seattle, and Hokkaido University in Japan. 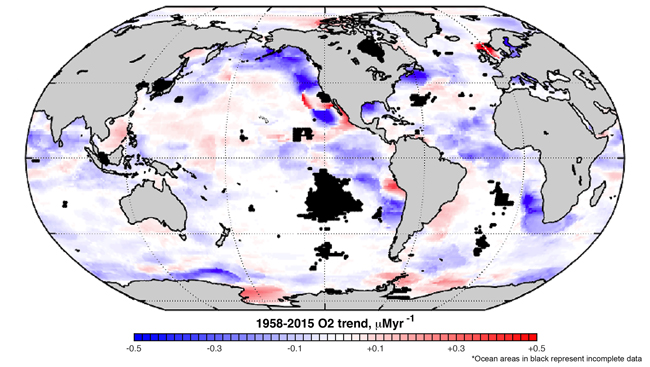 Global map of the linear trend of dissolved oxygen at the depth of 100 meters. (Image courtesy Georgia Tech.)