New climate forecasts for watersheds - and the water sector

Nov. 10, 2017 | Water managers and streamflow forecasters can now access bi-weekly, monthly, and seasonal precipitation and temperature forecasts that are broken down by individual watersheds, thanks to a research partnership between the National Center for Atmospheric Research (NCAR) and the University of Colorado Boulder (CU Boulder). The project is sponsored by the National Oceanic and Atmospheric Administration (NOAA) through the Modeling, Applications, Predictions, and Projections program.

Operational climate forecasts for subseasonal to seasonal time scales are currently provided by the NOAA Climate Prediction Center and other sources. The forecasts usually take the form of national contour maps (example) and gridded datasets at a relatively coarse geographic resolution. Some forecast products are broken down further, based on state boundaries or on climate divisions, which average two per state; others are summarized for major cities.

But river forecasters and water managers grapple with climate variability and trends in the particular watersheds within their service areas, which do not align directly with the boundaries of existing forecast areas. A forecast that directly describes predicted conditions inside an individual watershed would be extremely valuable to these users for making decisions in their management areas, such as how much water to release or store in critical reservoirs and when.

To bridge this gap, the NCAR–CU Boulder research team has developed a new prototype prediction system that maps climate forecasts to watershed boundaries over the contiguous United States in real time. The system is currently running at NCAR, with real-time forecasts and analyses available on a demonstration website.

"We are trying to improve the accessibility and relevance of climate predictions for streamflow forecasting groups and water managers," said NCAR scientist Andy Wood, who co-leads the project. "We can’t solve all the scientific challenges of climate prediction, but we can make it easier for a person thinking about climate and water in a river basin — such as the Gunnison, or the Yakima, or the Potomac — to find and download operational climate information that has been tailored to that basin’s observed variability."

The project is funded by NOAA, and the scientists plan to hand off successful components of the system for experimental operational evaluation within the NOAA National Weather Service.  Collaborators include scientists from the NOAA Climate Prediction Center and partners from the major federal water agencies: the U.S. Army Corps of Engineers and the Bureau of Reclamation. 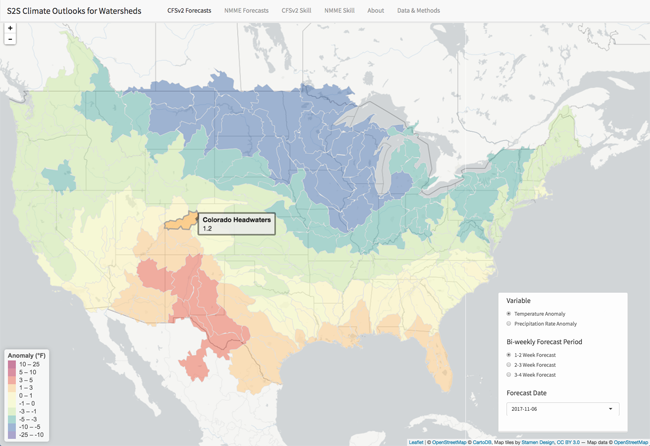 This screenshot of the S2S Climate Outlooks for Watersheds website shows forecasted temperature anomalies for watersheds across the contiguous United States. As users scroll across different watersheds, they get more precise information. In this screenshot from early November 2017, the forecast is showing that, over the next one to two weeks, the Colorado Headwaters watershed is expected to be 1.2 degrees warmer than normal. Visit the website to learn more. (©UCAR. This image is freely available for media & nonprofit use.)

Beyond the standard weather forecast

Precipitation and temperature forecasts that extend beyond the typical 7- to 10-day window can be useful to water managers making a number of important decisions about how to best regulate supplies. For instance, during a wet water year, when snowpack is high and reservoirs are more full than usual, the relative warmth or coolness of the coming spring can affect how quickly the snow melts. Good spring season forecasts allow water managers to plan in advance for how to best manage the resulting runoff.

For water systems in drought, such as California's during 2012–2015, early outlooks on whether the winter rainy season will help alleviate the drought or exacerbate it can help water utilities strategize ways of meeting the year’s water demands.

Historically, making these kinds of longer-term predictions accurately has been highly challenging. But in recent years, scientists have improved their skill at subseasonal and seasonal climate prediction. NOAA’s National Centers for Environmental Prediction plays a key role, both running an in-house modeling system — the Climate Forecast System, version 2 (CFSv2) — and leading an effort called the North American Multi-Model Ensemble (NMME). These model-based forecasts help inform the NOAA official climate forecasts, which also include other tools and expert judgment.

NMME combines forecasts from seven different climate models based in the U.S. and Canada to form a super-ensemble of climate predictions that extend up to 10 months into the future. The combination of the different forecasts is often more accurate than the forecast from any single model. Temperature forecasts, in particular, from the combined system are notably more accurate than they were 10 years ago, Wood said, partly due to their representation of observed warming trends. Even with these new tools, however, predicting seasonal precipitation beyond the first month continues to be a major challenge.

The NCAR–CU Boulder project makes use of both the CFSv2 and NMME forecasts. It generates predictions for bi-weekly periods (weeks 1-2, 2-3, and 3-4) from CFSv2 that are updated daily and longer-term forecasts derived from the NMME (months 1, 2, 3, and season 1) that are updated monthly. The scientists currently map these forecasts to 202 major watersheds in the contiguous U.S.

The resulting watershed-specific forecasts are available in real-time on the project's interactive website, which also provides information about their accuracy and reliability.

"It's important for users to be able to check on the quality of the forecasts," said Sarah Baker, a doctoral student in the Civil, Environmental, and Architectural Engineering Department at CU Boulder. "We're able to use hindcasts, which are long records of past forecasts, to analyze and describe the skill of the current forecasts.

Baker, who also works for the Bureau of Reclamation, has been building the prototype system under the supervision of Wood and her academic adviser, CU Professor Balaji Rajagopalan.

The researchers are also using analyses of forecast accuracy and reliability to begin correcting for systematic biases — such as consistently over-predicting springtime rains in one watershed or under-predicting summertime heat in another — in the forecasts.

The project team has presented the project at a number of water-oriented meetings in the western U.S. Water managers, operators, and researchers from agencies such as the Bureau of Reclamation and utilities such as the Southern Nevada Water Authority, which manages water for Las Vegas, have expressed interest in the new forecast products.

"This project has great potential to provide climate outlook information that is more relevant for hydrologists and the water sector. It will be critical to connect with stakeholders or possible users of the forecasts so that their needs can continue to help shape this type of information product," said NOAA’s Andrea Ray. Ray leads an effort funded by NIDIS, the National Integrated Drought Information System, to identify tools and information such as this for a NOAA online Water Resources Monitor and Outlook that would also help connect stakeholders to climate and water information.

In the coming year, the research team will implement statistical post-processing methods to improve the accuracy of the forecasts. They will also investigate the prediction of extreme climate events at the watershed scale.