BOULDER – New research has identified correlations between weather conditions and the occurrence of West Nile virus disease in the United States, raising the possibility of being able to better predict outbreaks.

The study, by researchers with the National Center for Atmospheric Research (NCAR) and the Centers for Disease Control and Prevention (CDC), finds strong correlations across much of the country between an increased occurrence of West Nile virus disease and above average temperatures in the preceding year. The scientists also find that precipitation influences subsequent disease outbreaks, although the impacts vary by region.

The weather may influence West Nile virus activity by affecting the breeding habitats and abundance of Culex species mosquitoes, which transmit the virus. The weather may also have other impacts, such as affecting populations of infected birds that pass on the virus to mosquitoes.

“We've shown that it may be possible to build a system to forecast the risk of West Nile virus disease several weeks or months in advance, before the disease begins to peak in summer,” said lead author Micah Hahn, a scientist with both NCAR and CDC. “Having advance warning can help public health agencies plan and take additional steps to protect the public.”

The study appears this week in the American Journal of Tropical Medicine and Hygiene. It was funded by CDC and the National Science Foundation, which is NCAR’s sponsor.

There is no vaccine or specific treatment for the disease. But predicting outbreaks could enable local officials to take action to reduce the number of mosquitoes and alert the public to take extra precautions to avoid being bitten. 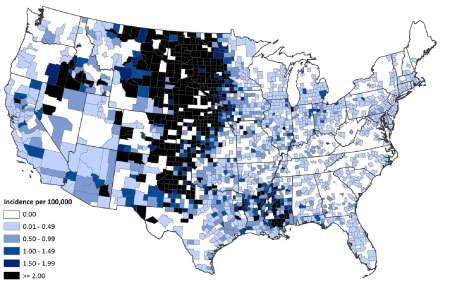 This map shows the average number of annual cases of West Nile virus with neurological symptoms that were reported to the CDC from 1999 to 2013. Close to 40,000 cases were reported during that period, with more than 1,600 deaths. (Source: ArboNET, Arboviral Diseases Branch, Centers for Disease Control and Prevention.)

Previous research into possible links between West Nile virus disease and weather has focused on limited geographic areas or relatively short time periods. For the new study, Hahn and her co-authors conducted a detailed statistical analysis of weather impacts on the disease in counties across the contiguous United States from 2004 through 2012. They used county-level West Nile virus neurologic disease reports and local temperature and precipitation data.

Dry in the East, wet in the West

When it came to precipitation, the impacts were more complex.

In the eastern United States, drier-than-normal fall and spring seasons correlated with above-average West Nile virus disease outbreaks the following summer. But in much of the West, the picture was different: wetter-than-average winters correlated with above-average outbreaks. For example, Western counties that received 100 millimeters (about 4 inches) of precipitation above average generally had a 1.4 times higher likelihood of an above-average West Nile virus outbreak.

Why the difference between the eastern and western United States?

The authors suggest that the Culex species mosquitoes that inhabit the East may thrive under drier conditions, when stagnant pools of water provide optimal breeding habitats and there are few downpours that would flush out larvae from catch basins. In contrast, higher-than-normal precipitation in the arid West could create temporary pools of fresh, sunlit water in irrigated fields—a breeding location favored by the western Culex species.

Overall, the study paints a variegated picture of the links between temperature, precipitation, and West Nile virus disease occurrence. For example, the disease in the Northern Rockies and northwestern Plains appears to increase with drier conditions—making that region more similar to the East in terms of the virus. While the reasons are unclear, the paper speculates that it may have to do with larger snowpack that causes moister spring soil conditions.

The authors stress that a prediction system would need to consider regional variations. It would also need to consider non-weather factors, such as the percentage of elderly people living in the county (who are more likely to develop neurologic symptoms if infected) and past outbreaks of West Nile virus disease (which can increase immunity in local bird populations and therefore reduce subsequent infection rates in people).