To the last drop: Improving water supply forecasts for the Rio Grande

May 13, 2015 | Before the Rio Grande wends 1,900 miles across the desert Southwest, trickling to its end in the Gulf of Mexico, it begins life as a snow-fed stream in the mountains of Colorado.

Despite its relatively short journey through the state, the Rio Grande depends on melting snow in the mountains ringing Colorado's San Luis Valley to deliver a significant portion of the water that will supply farmers and towns downstream in New Mexico, Texas, and, if there's enough left, Mexico. 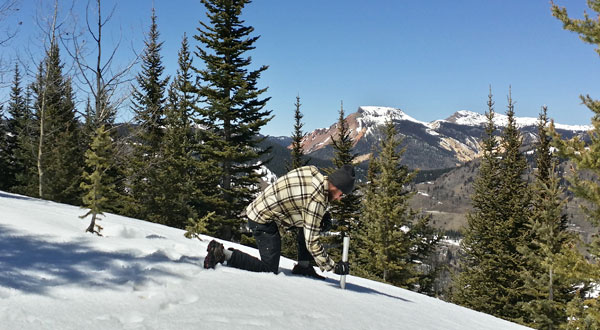 NCAR field technician John Mickey conducts a snow survey at 11,000 feet, near the historic mining community of Platoro, Colorado. The measurements will be used to help create better water supply forecasts for the upper Rio Grande River. (©UCAR. Photo by David Gochis, NCAR. This image is freely available for media & nonprofit use.)

Forecasts are made each spring for the amount of water that will flow from the snowpack, but they have historically been plagued by inaccuracy. Now, scientists at the National Center for Atmospheric Research (NCAR) are partnering with local, state, and federal agencies in an effort to improve those forecasts.

"This project was motivated by a series of erroneous water supply forecasts, which can have a ripple effect through the agricultural economy," said NCAR scientist David Gochis, the principal investigator on the project.

If the forecast is too high, Gochis said, farmers in the San Luis Valley may choose to plant thirstier crops, only to realize when it's too late that they don't actually have the water they need to irrigate them. If the forecast is too low, Colorado's initial calculations of how much water the state is legally mandated to deliver to New Mexico, and therefore the amount of water actually sent in early season, will also be too low. Once Colorado water managers realize there is more water available than previously predicted, they must make up the difference by diverting more water later in the growing season, another potential blow to farmers.

In addition, flows in the Rio Grande must be managed to protect critical plant and animal habitats along the river, which further complicates water management.

The amount of water that Colorado owes its southern neighbor each year is specified by an interstate compact and based on the runoff in a given year. However, forecasts of that runoff can have appreciable errors, resulting in water supply management problems that have only been made worse by a string of dry years.

Most attempts to improve the situation have focused on wringing more information out of existing observations and methods of producing water supply forecasts, Gochis said. On the other hand, NCAR, which is partnering with the Colorado Water Conservation Board, the Conejos Water Conservancy District, and other research teams on the project, is working to increase the actual observations on the ground. Those observations will then be used to feed an advanced computer model, NCAR's Weather Research and Forecasting Model–Hydrologic extension (WRF-Hydro), with the goal of creating a better overall forecast of river flow. 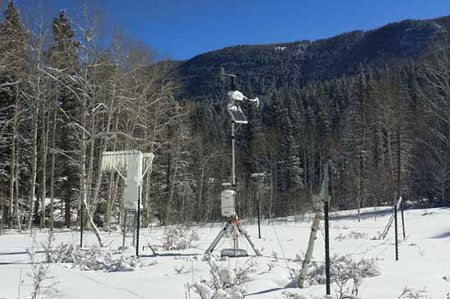 "A lot of the annual water supply for the Rio Grande is tied up in the snowpack that's already there, in the basin, in March and April," Gochis said. "If we can come up with a better way to characterize that snowpack, we believe it will translate into a better seasonal water supply forecast."

New observations will come from a research radar supplied by the National Oceanic and Atmospheric Administration (NOAA) National Severe Storms Laboratory, which will provide precipitation estimates for the San Luis Valley, and NASA's Airborne Snow Observatory, which will measure total snowpack during two flights over the basin.

The goal is for the WRF-Hydro model to use these new observations to build a better forecast, and what the research team learns will have implications beyond the Rio Grande. NCAR's WRF-Hydro model has been selected by NOAA’s new National Water Center in Tuscaloosa, Alabama, for use across the entire country. The first national operational forecasts are on track to be produced starting in 2016.

"This project on the Rio Grande is, in a sense, a pilot project for the application of a seasonal water supply forecast," Gochis said. "This is similar in some ways to the type of forecasts we're going to be making next year for the rest of the nation. It's an opportunity to evaluate its strengths and weaknesses and keep making improvements."