Scientists tackle mystery of thunderstorms that strike at night

Multiagency project will probe nocturnal thunderstorms on the Great Plains

BOULDER – Thunderstorms that form at night, without a prod from the Sun's heat, are a mysterious phenomenon. This summer scientists will be staying up late in search of some answers.

From June 1 through July 15, researchers from across North America will fan out each evening across the Great Plains, where storms are more common at night than during the day. The research effort, co-organized by the National Center for Atmospheric Research (NCAR) and several collaborating institutions, will use lab-equipped aircraft, ground-based instruments, and weather balloons to better understand the atmospheric conditions that lead to storm formation and evolution after sunset.

Their results may ultimately help improve forecasts of these sometimes damaging storms.

The Plains Elevated Convection at Night (PECAN) field campaign will involve scientists, students, and support staff from eight research laboratories and 14 universities. The $13.5 million project is largely funded by the National Science Foundation (NSF), NCAR's sponsor, which contributed $10.6 million. Additional support is provided by NASA, the National Oceanic and Atmospheric Administration (NOAA), and the U.S. Department of Energy.

Aloft in the night

Thunderstorms that form during the day are less puzzling than nighttime storms. The Sun heats the Earth’s surface, which in turn, warms the air directly above the ground. When that warm air is forced to rise, it causes convection—a circulation of warm updrafts and cool downdrafts—and sometimes creates a storm.

The formation of thunderstorms at night, however, when the Sun is not baking the land, is less well understood.

"At night, the entire storm circulation is elevated higher off the ground," said NCAR scientist Tammy Weckwerth, a PECAN principal investigator. "This makes observations of the conditions leading to nighttime thunderstorms much more challenging because that part of the atmosphere is not well covered by the network of instruments we normally rely on.

The vast array of instruments available to PECAN researchers will allow them to collect data higher in the atmosphere. This data will help scientists characterize the conditions that lead both to individual storm formation as well as to the clustering and organizing of these storms into large-scale systems, which can drop significant precipitation.

"Nighttime thunderstorms are an essential source of summer rain for crops but are also a potential hazard through excessive rainfall, flash flooding, and dangerous cloud-to-ground lightning," says Ed Bensman, program director in NSF’s Division of Atmospheric and Geospace Sciences.  "Weather forecast models often struggle to accurately account for this critical element of summer rainfall on the Great Plains.  The PECAN field campaign will provide researchers and operational forecasters with valuable insights into thunderstorms at night—and improve our ability to model them more accurately."

Deploying in the dark

The campaign, based in Hays, Kansas, will begin each day at 8 a.m., when a crew of forecasters starts developing a nightly forecast. At 3 p.m. the scientists will use the forecast to determine where across northern Oklahoma, central Kansas, or south-central Nebraska to deploy their mobile resources. Moving dozens of people around the Great Plains each night will be a challenge for PECAN, but it's also what distinguishes it from past field projects.

"Previous severe weather campaigns have focused mostly on daytime storms, for largely practical reasons, as it is more difficult to set up instruments in the dark," said Bart Geerts, a professor of atmospheric science at the University of Wyoming and a PECAN principal investigator. "But the large thunderstorm complexes travelling across the Great Plains at night really are a different beast." 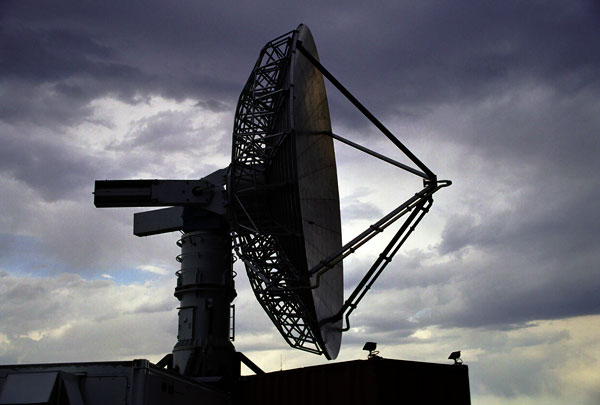 NCAR's portable S-Pol radar is one of the many instruments that will be deployed during the PECAN field campaign to help scientists better understand nighttime thunderstorms. (©UCAR. This image is freely available for media & nonprofit use.)

Scientists believe that several interacting factors may contribute to nocturnal storm formation and maintenance: a stable layer of air at the surface; a strong wind current above that layer, known as a low-level jet; and atmospheric waves, some of which are called "bores," that ripple out from the storms themselves.

"But we just don't really know how they interact," Geerts said. "That's what PECAN is about."

A better understanding of these storms will have relevance for areas beyond the Great Plains. Clustered nighttime thunderstorms are common in various regions scattered across the globe.

A fleet of instruments

PECAN will use three research aircraft, two of which—a University of Wyoming King Air and a NASA DC-8—will fly in the clear air away from the storms. Only the third, a NOAA P-3, which is widely used in hurricane research and reconnaissance, will be able to fly into the trailing region of storms.

The researchers will also rely on a number of ground-based instrument suites, known as PECAN Integrated Sounding Arrays, or PISAs. Six of the PISAs will operate from fixed locations around the study area, and four will be mobile, allowing them to be repositioned each night depending on where storms are expected to form.

The instruments within each PISA vary, but collectively they will give each array the ability to measure temperature, moisture, and wind profiles, as well as launch weather balloons. Among the instruments are several newly developed at NCAR's Earth Observing Laboratory (EOL), including one that uses an innovative laser-based technique to remotely measure water vapor and an advanced wind profiler.

Finally, the scientists will have a fleet of mobile and fixed radars, including the NCAR S-Pol. In all, PECAN researchers will have access to more than 100 instruments brought to the effort by partner institutions from across North America.

"The sheer number of instruments being coordinated is unprecedented," said Weckwerth, who has participated in more than 15 other field expeditions.

The planning necessary to manage this large collection of instruments—from finding property suitable for a fixed radar to making sure the mobile instruments are out of harm's way while tracking a storm—is being taken on by EOL's Project Management Office. That team is also responsible for housing, food and other logistics for the scientists and students who are participating in the campaign.