Redesigned graphics provide forecasts at a glance to millions of Americans

BOULDER – New online graphics being rolled out this summer by the National Weather Service (NWS) are based on research by a team of risk communication experts at the National Center for Atmospheric Research (NCAR) who focused on how to better convey forecast information visually.

Beginning July 7 the NWS will use the redesigned icons for all weather.gov local forecasts. These point-and-click forecasts influence weather-related decisions by people across the country, drawing 2 to 4 million unique web views daily.

The new icons will feature split images and color-coded boxes to better communicate the existence, timing, and potential severity of upcoming weather threats. For example, instead of portraying a night as entirely rainy, a split image could show a 30 percent chance of rain in the early part of the evening, followed by partial clearing after midnight. Colored rectangles drawn around the images will also be used to call attention to weather threats, with yellow denoting a watch, orange denoting an advisory, and red denoting a warning. 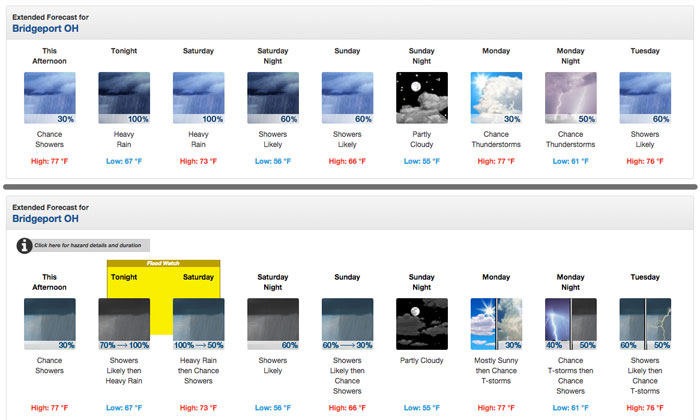 Existing NWS forecast graphics (top) emphasize the probability of rain and other weather events. The redesigned graphics (bottom) contain more information about the timing and potential severity of forecast weather systems. These examples are from the June 26 forecast for Bridgeport, Ohio. To view local forecasts for other areas, visit weather.gov.

The changes are based on several years of work by a multidisciplinary team at NCAR that worked closely with the NWS, an agency within the National Oceanic and Atmospheric Administration. The team developed prototype graphics and surveyed tens of thousands of weather.gov local forecast users, finding that specific improvements to the graphics could greatly improve public understanding of the forecasts.

“We want to help people better understand when there’s a major weather threat and when it’s likely to occur,” said NCAR’s Julie Demuth, a researcher who specializes in communicating weather risks to the public. “The main goal is to better convey information that's critical for protecting lives and protecting property.”

Eli Jacks, acting chief of the NWS’s Forecast Services Division, said the changes are an important step toward helping people make better use of NWS forecasts.

“Just putting out the forecast is no longer enough,” he said. “This helps users interpret the forecast more easily and use it to make informed decisions.”

NWS director Louis Uccellini said the new project demonstrates the importance of research in communicating forecasts to the public.

“Research provides the essential backbone to any effective operational product used by the National Weather Service to protect lives and property,” Uccellini said. “Not only must we have advancements in atmospheric science to improve forecasts and services, we must also infuse social science to ensure we are communicating forecast information in a way that is clear and understandable so people can take appropriate action.”

The work was primarily funded by the NWS, with additional support from NOAA and the National Science Foundation, which sponsors NCAR.

Forecasts at a glance

Demuth and her colleagues began looking into the issue several years ago when the NWS wanted to determine if the icons could communicate weather information more clearly. An icon depicting rain, for example, might prompt people to cancel outdoor plans even if there was just a 10 percent chance of showers for a few hours.

The research team, working with the NWS, focused on better transmitting two aspects of a forecast that are crucial for helping people understand their risk: the existence of a hazardous weather threat and the timing of that threat. They developed experimental graphics and text with the goal of conveying sometimes complex information in a way that is easy to interpret.

“This is supposed to be a forecast at a glance, so we adapted the approach using NCAR’s work as a basis.” Jacks said. “Ideally a user will look at it and get a pretty good idea of what is expected.”

Demuth and her colleagues conducted two rounds of surveys with more than 13,000 users of NWS forecasts, asking them to evaluate designs to see which one was best at communicating a severe thunderstorm warning and a flood watch.

The surveys showed that users were significantly better at identifying the timing and nature of the weather threat when the information was presented with new graphics and reinforced with wording that stated the start and stop times of the threat. For example, more than 97 percent of survey respondents correctly identified the start and end time of the flood watch with the revamped graphics and text, compared to less than 4 percent in a control group using the existing NWS presentation.

The research team summarized its findings in a 2013 paper in Weather and Forecasting, an American Meteorological Society journal.

Building on this work, the NWS further refined the icons and began to test them last year, asking for input from thousands of users. The agency is now previewing the new graphical approach on its website as it prepares to launch the new version across the nation next month.

“This work illustrates the importance of evaluating how people interpret information about risks, particularly when it’s a matter of public safety,” Demuth said. “Making improvements in how we communicate hazardous weather information—even seemingly small improvements—can translate into very large benefits for society.”

“It’s gratifying to be part of a collaboration where NCAR research is being used to help the National Weather Service alert people across the U.S. about potentially dangerous weather," said Thomas Bogdan, president of the University Corporation for Atmospheric Research, which manages NCAR. "This is a great example of how investments in science lead to substantial benefits for society.”