Climate change is one factor, but there’s more to the story

August 4, 2015 | For more than a decade, scientists have known that the mosquitoes transmitting dengue fever have been moving from the tropics north into the United States—as far north as New Jersey, with outbreaks in Brownsville, Texas, and heavily touristed Key West, Florida.

Now NCAR scientists and their colleagues are learning more about why certain areas are prone to dengue outbreaks while others aren’t, and what factors can best predict the future impact of the disease also known as “breakbone fever."

“Climate change is an important factor in the development of the mosquitoes that carry dengue viruses, but it may not be the primary driver of dengue,” said NCAR scientist Mary Hayden, a medical anthropologist. 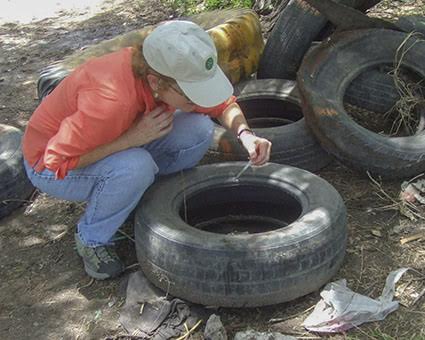 “Climate change is important at large scales, but as you move to specific locations, it becomes one of many factors that affect disease and transmission risk,” added meteorologist Andrew Monaghan, another member of the NCAR team. He explained that other factors include the areas where mosquitoes breed and develop, local disease prevention efforts, socioeconomic conditions, and human population density.

To better understand this complicated issue, NCAR experts in climate, weather, disease, and behavioral science have been examining dengue for nearly a decade, in collaboration with various universities and federal agencies, including the Centers for Disease Control and Prevention. "We've built a multidisciplinary team, which is what's needed to understand how all the factors interact," said Hayden.

A half-century ago, less than 10 countries experienced serious dengue epidemics. Dengue viruses, transmitted by several species of Aedes mosquitoes, are now passed from human to mosquito to human at endemic levels in more than 100 countries, according to the World Health Organization. Symptoms typically include a sudden high fever, severe headache, and joint pain.

Estimates of annual infections range from 50 million to 400 million people worldwide, with about 500,000 hospitalized. Young children especially are vulnerable. There are about 12,500 deaths each year from dengue, WHO reports.

An outbreak in Key West in 2009–2010 represented the first dengue cases in the continental United States outside the Texas-Mexico border region since 1945. The number of cases in this country remains small but several recent outbreaks, including one in Brownsville, Texas, in 2013, have health officials concerned. Hayden and others believe dengue is underreported in the United States, in part because of low awareness.

The good news is that research and fieldwork to date indicate that it takes a nearly “perfect storm” of climatic, socioeconomic, and human behavioral factors for the mosquito to thrive in the United States, Hayden said.

For optimal development, the mosquitoes want to be in a “sweet spot” of 77 to 90 degrees Fahrenheit (25 to 32 degrees Celsius) with as few fluctuations as possible, Monaghan said. So even though one would expect dengue fever in Nogales, Mexico—given its prevalence in nearby cities just south—temperatures, especially at night, typically are cool enough to thwart an outbreak.

The mosquito depends on humans for “blood meals,” but also is effective at hitching rides on trucks, cargo ships, and the like. In South America, Hayden and colleagues want to study the surprising emergence of dengue in the Galapagos Islands, off the coast of Ecuador.

Hayden spends much of her time examining how human perceptions and behavior can increase disease risk. She has conducted household surveys in the U.S. dengue hot spots of Brownsville and Key West. That research included hunting for outdoor surfaces favorable to mosquito breeding, such as old tires, tarps, and other objects that capture standing water. In 2012, Hayden and colleague Kacey Ernst (University of Arizona) conducted a survey of 400 Key West households that showed an abundance of potential breeding sites.

Monaghan said scientists increasingly are simulating dengue’s future impact—taking climate change, population trends, and other factors into account. He would like to expand these computer models to include the effectiveness of local interventions such as public awareness education and the use of biological agents to kill larvae and adult mosquitoes.

“We’re interested in learning how we can best intervene to reduce the threat of dengue outbreaks,” he said. “As climate change continues, we're looking for the drivers we can control at the local level.”

Collaborators
Centers for Disease Control and Prevention
University of Arizona