August 26, 2015 | While many people take advantage of the sunshine this time of year, NCAR scientist Rita Roberts seeks out storms.

Roberts is leading an experiment this summer along the Front Range to improve short-term forecasts of heavy rainfall and flash floods, particularly over complex terrain.

The tests, which also took place last summer, are part of NCAR’s Short Term Explicit Prediction (STEP) program. The project is pioneering in that it runs several meteorological and hydrological models at the same time, combined with advanced data analysis. Funding comes from the National Science Foundation. 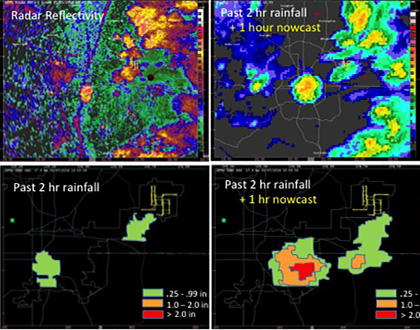 Radar images of precipitation (top), with computer model outputs (below) of rainfall accumulation and short-term rainfall predictions for specific areas. STEP uses meteorological and hydrological models, combined with advanced data analysis, to improve short-term forecasts of rain and flash floods. (©UCAR. This image is freely available for media & nonprofit use.)

"The system captures in real time where storms are forming and where they are dissipating," said Roberts, who has analyzed high-impact weather events for NCAR since 1982. "It's about improving predictions of heavy rainfall and flash flooding."

STEP’s rainfall forecast will be tested during the monsoon season next spring in Taiwan, which has a similar mix of plains and rugged mountains as the Front Range. Individual components of STEP are being tested elsewhere, while the complete system is drawing interest from weather forecast offices in other countries.

STEP’s goal is to provide accurate rainfall and streamflow forecasts up to a day out with particular emphasis on nowcasting exactly where the heavy rainfall will be in the next few hours using information that is updated continuously. Such short-term forecasts are critical to providing warnings to communities so they can reduce fatalities, injuries, and economic damage from rainstorms, floods, and other extreme weather events. Roberts said she believes STEP also could be used to provide motorists with real-time alerts about areas to avoid because of rain and potential flooding.

Said Jenny Sun, chair of the STEP program: "We’ve talked with weather forecasters who tell us their biggest challenge is to forecast heavy rainfall—and the biggest impact to the community is flooding."

The STEP test along the Front Range combines:

STEP produces digital maps with a resolution of one square kilometer that show how much rain has fallen in the past two hours and how much is expected in the next hour. More complex maps show how atmospheric conditions and stream levels are changing.

Rainfall forecasts are evaluated in part through an extensive network of rain gauges run by the Community Collaborative Rain Hail and Snow Network (CoCoRaHS), a nonprofit network of citizen volunteers. 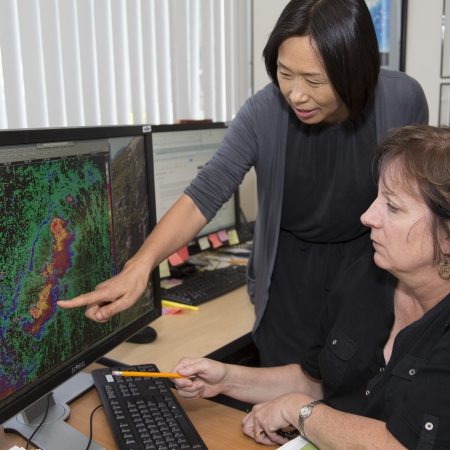 The auto-nowcaster component has been tested in Texas; Florida; and Washington, D.C. WRF-Hydro, a hydrological modeling extension package that can operate independently or coupled with the WRF atmospheric model, is being integrated into the National Weather Service’s new National Water Center and is expected to start running in real time next May.

The project wouldn’t be possible without advances in the ability to observe how three-dimensional phenomena in the atmosphere evolve over time. NCAR’s powerful Yellowstone supercomputer in Wyoming crunches the data.

Since scientists can’t measure all atmospheric conditions at any given moment, the STEP program takes uncertainties into account by using NCAR’s ensemble modeling approach led by Morris Weisman and Glen Romine. This way a range of equally likely conditions can be simulated.

Roberts said the STEP team is planning to conduct another real-time test along the Front Range next summer. "Our goal," she said, "is to keep improving the capability and accuracy of the system."