A cool setting for hurricane births

September 9, 2015 | One of the biggest mysteries about hurricanes has to do with their very beginnings. Certain clusters of thunderstorms over warm ocean waters gradually spin up into tropical storms and hurricanes while others simply dissipate—but scientists aren’t sure why.

New research by NCAR scientist Chris Davis aims to shed light on this issue. Davis, director of NCAR’s Mesoscale and Microscale Meteorology Lab, focuses on the role of downdrafts that produce relatively cool pockets of air near the surface prior to the formation of tropical cyclones. The cool pools can, in turn, trigger vigorous updrafts. These vertical movements of air enable a rotation several miles up to generate a vortex near the surface, which then intensifies into a tropical cyclone.

The research is appearing in the Journal of the Atmospheric Sciences.

"This is a surprising result," Davis said of the role of cool pools. "It may help us reconcile some of the seemingly disparate theories about hurricane genesis." 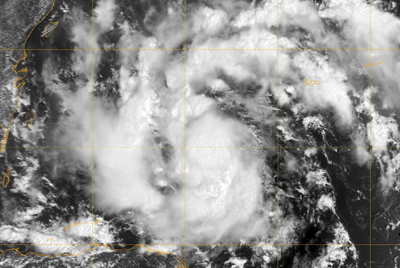 A satellite image captured this 2010 storm just as it was strengthening into Tropical Storm Karl. Karl and other storms observed during the PREDICT field campaign provided evidence that the presence of relatively cool pockets of air near the ocean surface may play a role in the development of tropical storms and hurricanes. (Image courtesy Naval Research Lab.)

Davis’s interest in the cool pools stems from a major field project, known as the Pre-Depression Investigation of Cloud Systems in the Tropics (PREDICT). The National Science Foundation–funded project deployed a specially equipped research aircraft to take numerous observations of the atmosphere over the tropical Atlantic Ocean during the 2010 hurricane season with the goal of better understanding how hurricanes form.

Davis and his colleagues noticed that, in regions where tropical storms were forming, the observations showed that the lower part of the atmosphere contained pools of air that were about 2 degrees Celsius cooler than surrounding air.

To learn more about these cool pools, Davis turned to a specialized NCAR computer model of clouds to run a set of simulations of an idealized, rotating atmosphere above a uniform tropical ocean. In these conditions, random thunderstorms would join into clusters and gradually spin up a vortex about three miles above the surface.  Cool pockets of air near the surface then consistently emerged within larger regions of warm air prior to the development of a surface vortex.

"The simulations produced a temperature profile that was very similar to the observations," Davis said.

Penetrating down to the surface

While tropical cyclone researchers have known about the rotations higher up, they have long puzzled over how such rotations penetrate to the surface where they can tap the fuel of the warm upper ocean. Davis conjectures that the cool pools may hold the key for a couple of reasons:

A major challenge for this research, Davis added, is that the observations of cool pools taken during PREDICT were spaced about 100 miles apart, which were too dispersed to show regions of warm air in between. But without the contrasting regions of warm and cooler air, there would not be strong updrafts. By using the model, Davis was able to get a fuller picture.

"The results from the simulations, despite being highly idealized, give us a clue about resolving the inconsistency," Davis said. "The gradients in temperature matter."

Davis said the cool pools can advance our understanding of hurricane genesis. But he emphasizes that more research is needed with more complex models and better observations to resolve competing ideas. Some research points to a top-down process, with the vortex aloft controlling surface vortex formation. Other research indicates a bottom-up process in which clouds known as “hot towers” carry warm moist air from the ocean surface to the lower stratosphere.

The cool pools could incorporate aspects of both processes, with the vortex aloft generating the thunderstorms and their attendant downdrafts and cool pools of air, but the surface conditions helping to spur new updrafts that actually intensify the surface vortex. Such a process of organizing updrafts, Davis said, would be similar to squall lines over land, in which cool pools help lift the air on the flanks of the storms.

Davis, Chris. The Formation of Moist Vortices and Tropical Cyclones in Idealized Simulations, Journal of the Atmospheric Sciences, doi: 10.1175/JAS-D-15-0027.1