September 29, 2015 | A new NCAR-facilitated group aims to develop the know-how and tools for building resilient systems that can recover smoothly when catastrophic weather and climate events strike.

The group, the Engineering for Climate Extremes Partnership (ECEP), is building relationships with experts from a broad array of sectors, from engineering to business, government, academia, and American Indian tribal and community leadership. The common thread is concern for the mounting toll taken by extreme weather events, which is expected to worsen with climate change.

Central to ECEP is the Global Risk, Resilience, and Impacts Toolbox, or GRRIT. The toolkit will support disaster risk management and adaptation with a hazard database and software products ranging from applications that can be used on a smartphone to complex risk assessment and decision-making tools. NCAR scientists plan to release a beta version of GRRIT early next year and will continue developing it over time. 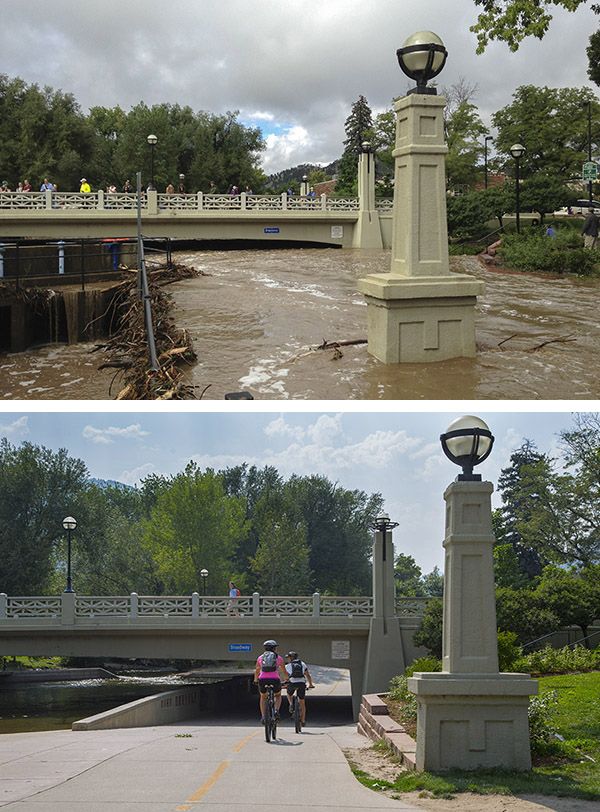 Top: As a raging Boulder Creek overtopped its banks in September 2013, a bicycle path engineered to "fail gracefully" by flooding provided resilience by channeling floodwaters through the city of Boulder, Colorado. (Photo by Lisa Gardner.)

Bottom: The same bicycle path two years after the flood. (©UCAR. Photo by Carlye Calvin. This image is freely available for media & nonprofit use.)

"Failure isn’t if but when and how badly," said Mari Tye, an NCAR scientist and former private-sector civil engineer. In a recent ECEP workshop, Tye described the rationale for responding to that inevitability by intentionally designing systems for "graceful failure." "Resilient systems account for a range of scenarios and are designed to recover in a controlled way from hazards, with an acceptable level of impact."

The beta version of GRITT will include a tool being jointly developed by NCAR and Willis Re, a global reinsurance broker, to provide damage potential estimates for hurricanes and other tropical cyclones. The tool’s development is being led by James Done, an NCAR scientist and Willis research fellow, and NCAR colleague Debasish PaiMazumder. It will be based on such parameters as storm intensity, size, and speed. The tool will be connected to a global tropical cyclone database that incorporates both historic events and model projections of storm activity. This feature will enable damage estimates for specific locations.

Additional tools are expected to focus on extreme rain and flood events, drought, heat waves, and windstorms. Another GRRIT feature, now in development by the U.S. Department of Energy’s Oakridge National Laboratory, is a system for hazard planning and climate adaptation in urban areas.

The GRRIT database eventually will consist of both observations and simulations of natural hazards, as well as estimated risks to infrastructure. The goal of ECEP’s database, software tools, and other products is to stimulate open-source applications based on GRRIT’s framework.

NCAR senior scientist Greg Holland, who co-leads ECEP, said he sees the toolbox becoming as useful for disaster resilience planning as NCAR’s Weather Research and Forecasting model has been for weather prediction. WRF’s open-source model has generated tens of thousands of users globally. Similar to other open community modeling resources based at NCAR, WRF is supported by tutorials, a help desk, workshops, and new module test and implementation standards. "That’s the kind of support we are implementing for GRITT," Holland said.

Responding to a growing need

Holland stressed the urgency of the effort, noting that, for example, more and more people are living in disaster-prone areas.

"As we’ve become more vulnerable, we’ve become less resilient," Holland said. "As a society, we can’t continue along that path."