Tracking air quality from high in the sky

October 21, 2015 | NCAR scientists have demonstrated how new types of satellite data could improve how agencies monitor and forecast air quality, both globally and by region.

The scientists used computer simulations to test a method that combines analysis of chemistry-climate model output with the kind of data that could be obtained from a planned fleet of geostationary satellites, each of which would view a large area of Earth on a continuous basis from high orbit.

For example, with a constellation of satellites, the system could be used to measure, track, and predict the effects of pollution emitted in Asia and transported to the western U.S., or the impacts of wildfires in the Pacific Northwest on air quality in the Midwest. 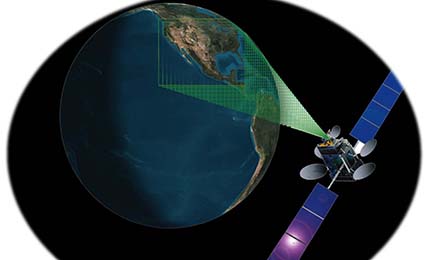 A high-orbit geostationary satellite could view a large area of the Earth, such as North America in this illustration, on a continuous basis. (Image courtesy NASA/Langley Research Center).

"We think the new perspective made possible by geostationary sensors would provide data that is useful for everyday air quality forecasting, as well as for early warnings about extreme events, like the effects of wildfires," said NCAR scientist Helen Worden, one of the members of the research team.

The NCAR team reported their test of the system's potential in a paper co-authored with a NASA scientist that appears in the journal Atmospheric Environment.

Current observations are mostly taken from low-elevation, globally orbiting satellites that provide only one or two measurements over a given location per day, thus limiting critical air quality observations, such as vehicle emissions during rush hour. ­One exception is an air quality forecasting system at the National Oceanic and Atmospheric Administration that uses geostationary sensors to provide information about tiny polluting particles known as aerosols. But that system doesn't track carbon monoxide, a primary indicator of air pollution that serves as a good chemical tracer for observing how pollutants are emitted and dispersed in the atmosphere. "Carbon monoxide lives long enough—a month or two—that you can track it around the Earth," Worden said.

To fill in the data gap, several countries and space agencies plan to deploy geostationary satellites by the end of the decade to observe and monitor air pollutants over North America, Europe, and East Asia.

The team members applied a statistical technique that they and colleagues have developed over the years to analyze data obtained by an instrument aboard NASA's globally orbiting Terra spacecraft called MOPITT (Measurement of Pollution in the Troposphere). A collaboration between the University of Toronto and NCAR, MOPITT pioneered the measurement of carbon monoxide from space. Starting with MOPITT's real-world observations, the scientists then produced a data set of hypothetical observations representative of those potentially obtainable from a constellation of geostationary satellites. They visualized their results on high-resolution maps, producing results for areas as small as 2.7 miles (7 kilometers) wide that extend as high as 7.5 miles (12 kilometers) into the atmosphere. 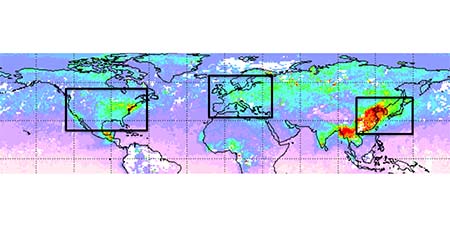 Measurements of carbon monoxide in April 2014 from the MOPITT instrument  (Measurement of Pollution in the Troposphere) aboard NASA's globally orbiting Terra spacecraft. The boxes show the observing domains for geostationary satellites and red colors indicate high levels of carbon monoxide. (©UCAR. Image courtesy Helen Worden, NCAR. This image is freely available for media & nonprofit use.)

When it comes to speed and cost, the NCAR method has several advantages. A month's worth of data, about 200 million data points, can be produced in less than 12 hours using a standard desktop computer. "The model produced very realistic results on high-resolution maps at a low computational cost," said NCAR scientist Jerome Barre, who led the study.

The scientists caution that there are limitations to the new system when viewing extremely polluted areas. The team accounted for the impact of clouds in their model to simulate the most realistic measurements.

A geostationary satellite positioned at about 22,000 miles above the equator will orbit in sync with the Earth’s rotation, thus remaining fixed above the same region. Measurements by the satellite's instruments can be taken many times a day. A constellation of such satellites would provide the coverage over populated regions needed to provide enough data to analyze air quality and atmospheric composition, determine whether the pollution is human-made or natural, and track its movement.

In addition to carbon monoxide, instruments on these satellites would gather data on other pollutants, such as nitrogen dioxide and ozone. "Combined, those will give you good indications of the chemical conditions of the atmosphere," Barre said.

That would enable scientists to track pollutants both vertically and horizontally in our atmosphere, he said, and that is "what's really needed to monitor, forecast, and manage air quality on a daily basis."