November 18, 2015 | Ashai Abdul is one of thousands of farmers in the West African country of Ghana who receive text messages with custom rain forecasts based on an advanced weather model developed at NCAR.

The subscription-based service has already paid off. One day, on seeing that heavy rain was forecast, Abdul delayed plans to bring in machinery and extra workers to his corn, rice, and soybean farm in northern Ghana. "I had the money still to hire the equipment another day and not lose my investment," he later told the forecast provider.

The forecasts are produced by Swedish-based Ignitia, which adapted the Weather Research and Forecasting Model (WRF) to a tropical climate. NCAR has been a lead developer of WRF and supports training and use of the open-source code by a large worldwide user community. 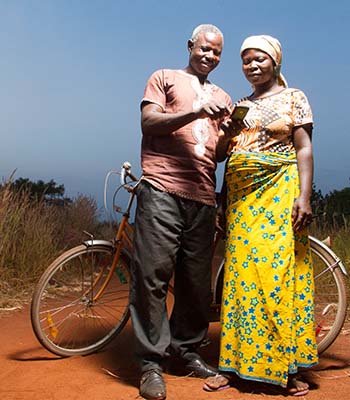 Accurate weather forecasts have huge potential across Africa, where crops are largely rain-fed. The forecasts in Ghana help farmers with key decisions, such as knowing when to plant, when to spray, and when to bring in extra labor and machinery.

Adapting to the tropics

Adapting the model to West Africa presented a challenge, since WRF was initially developed to simulate weather in the temperate latitudes of North America and Europe.

"The weather in West Africa is so different – no low pressure, no high pressure, no fronts driving everyday weather," said Ignitia chief executive Liisa Petrykowska, who has expertise in meteorology and physics. "Most local weather in the tropics is notoriously hard to model."

Moisture and heat are the primary drivers creating unstable weather conditions in the tropics. Large-scale pressure fields aren’t much of a factor, except in large tropical cyclones. While tropical weather is more regular overall, more microscale processes are at work, making it difficult for forecasters to predict rain accurately in a particular area. Thunderstorms, for example, can emerge, evolve, and fade quickly. 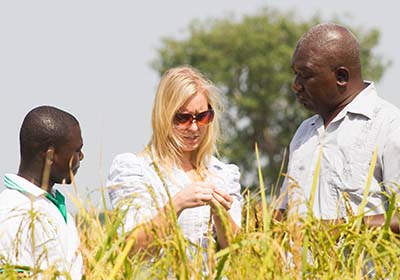 Farmer Ashai Abdul and his son meet with Ignitia Chief Executive Liisa Petrykowska in northern Ghana to discuss their use of Ignitia's rainfall forecast and its benefits for their rice crop. (Photo courtesy Ignitia. Photo by Ike Nortey Focus Xtreme Photography, Accra, Ghana.)

After years of trying and almost giving up, Ignitia scientists came up with a high-resolution version of WRF with data points two- to five-miles (3 km to 9 km) apart. They in effect developed a hybrid system that combines WRF with their own model. The new system, trademarked as iska, especially focuses on solar heating at and near the surface of the Earth, and on the physical processes of cloud formation, cloud growth, and precipitation. According to Ignitia, its short-range rain forecasts are 84 percent accurate.

Petrykowska said she and other Ignitia scientists had worked with WRF before. "It wasn’t a new platform for us. The point though was making it efficient as a forecasting tool for the tropics."

Iska was tested in 2013, then offered as a subscription service to farmers in 2014. Since most Ghanaians have basic cell phones, Ignitia partners with a cell service provider to get approximate GPS coordinates of the farms. Petrykowska said the company now has more than 80,000 subscriptions, the large majority of which are paid by farmers themselves.

The company did text-message trials using local languages and symbols, but concluded that communicating in English was the best way to go. Local languages are spoken more than written and some symbols were confusing, Petrykowska said. The text messages have a simple, standard structure, such as: "Today dry, tomorrow heavy rain." Although many farmers are illiterate, they quickly learn what the words mean, or ask their village chief to translate, Petrykowska said.

Subscribers get a daily 48-hour forecast, a monthly outlook, and a six-month seasonal outlook. Their phone is debited 3-4 cents per text message.

Surveys have shown that corn farmers who subscribe to the service have experienced up to an 80 percent jump in income, while cocoa farmers report a 40 to 50 percent boost.

Ghana is the world’s second largest producer of cocoa beans, the key ingredient in chocolate. But Ghana’s cocoa bean production declined dramatically in the 2014-15 season because of lack of rainfall and a short supply of pesticides to combat a fungus that can destroy cocoa pods. "We’ve heard a lot of stories where our forecasts have helped those farmers who subscribe to better know when to spray their trees with fungicide," Petrykowska said.  "If they spray and then it rains, then the chemicals run off and they can’t afford to buy more pesticide, and yields decrease."

Ignitia is structured as a for-profit business, but has received support for its development and start-up operations from the Swedish International Development Cooperation, USAID and others. Petrykowska said the break-even point is about 100,000 subscribers. The company has agreements with cell service providers to expand operations in West Africa to the Ivory Coast, Mali, Niger, Nigeria and Senegal.