Traveling this holiday season? While congestion and bad weather can cause headaches, decades of research into seemingly arcane atmospheric topics, like how ice crystals form in clouds or the effect of solar heat on asphalt and concrete, may well smooth your journey.

Here are five ways that NCAR research makes travel better now and throughout the year: 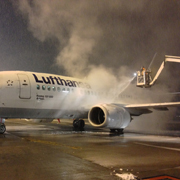 You know the drill: your plane’s delayed on the tarmac in snow or freezing rain, waiting for deicing vehicles to arrive and spray the wings so the plane can safely take off. The good news is the process has become more efficient, thanks in part to research at NCAR. A software product, developed at NCAR and called WSDDM (Weather Support to De–Icing Decision Making System), helps airports and airlines make decisions on applying deicing fluids, including how much time can safely elapse between deicing operations and takeoff. The use of the system reduces delays and lowers costs; United Airlines alone saved an estimated $1 million during a single snowfall at Chicago’s O’Hare International Airport.

Rough air does more than rattle cups of coffee. It’s also a significant flight risk, injuring an estimated 430 passengers and crewmembers in the United States from 2002 to 2013. To keep fliers safe and better guide pilots away from turbulence, NCAR scientists turned to U.S. Doppler weather radars that include data on wind variability—a frequent sign of turbulence in clouds. The resulting system, called the NCAR Turbulence Detection Algorithm, is used with all NEXRAD radars to successfully reduce turbulence-related incidents. NCAR also pioneered a system that uses observing instruments and specialized software to alert aircraft about dangerous turbulence in airports in mountainous settings. It’s been implemented at Alaska’s Juneau Airport and can be modified for use in other airports in rough terrain, such as Maui and Las Vegas. 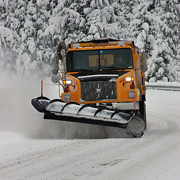 Winter storms can bedevil transportation officials who must make real-time decisions on deploying plows and pretreating road surfaces to prevent ice build-up or give motorists better traction in snowpacked conditions. To help keep winter roads clear, NCAR scientists and engineers developed a custom road forecast system known as MDSS (Maintenance Decision Support System). It combines high-resolution forecast models, data about road temperature and friction, and traffic patterns. Deployed in a number of states, MDSS enables transportation officials to make more informed decisions about which stretches of pavement are most in need of plowing or pretreatment. 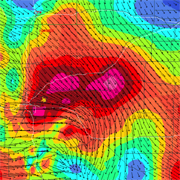 Invisible and violent downbursts of air have historically been a major threat to aircraft, blamed for killing 570 people in the United States between 1970 and 1994. Scientists and engineers from NCAR and academia, with funding from the Federal Aviation Administration, developed two wind shear detection systems that have been deployed throughout the United States and the world in recent decades. These systems, known as the Low-Level Windshear Alert System  and the Terminal Doppler Weather Radar (jointly developed by NCAR and the Lincoln Laboratory), are credited with keeping aircraft safe from wind shear and preventing more than $1 billion in losses.

At NCAR, we don’t predict the weather; our expertise instead is making weather predictions better. Working with the National Weather Service and colleagues in other labs and universities, NCAR scientists have aided the development of key forecasting advances, including the network of high-resolution, U.S. Doppler weather radars known as NEXRAD (Next-Generation Radar) and computer models used by the weather service for forecasting hurricanes and other weather events. Looking to the future, NCAR scientists are improving short-term forecasts of floods, taking to the skies to better forecast thunderstorms and other severe weather, and developing new tools, such as an advanced cloud radar, that can help scientists better understand variations in snowfall in a winter storm. Such advances, while not directly developed for drivers or pilots, can improve weather predictions for travelers.

If you've been checking the weather forecast yourself, you may have noticed some other NCAR research. The new icons in the National Weather Service forecasts were developed with a team of NCAR social scientists who studied how to better communicate potential weather threats.

We hope all these advances make this time of year more enjoyable. Safe travels!