BOULDER — Climate change is likely to have far-reaching impacts on food security throughout the world, especially for the poor and those living in tropical regions, according to a new international report that includes three co-authors from the National Center for Atmospheric Research (NCAR).

The report, issued today at the Paris 2015 United Nations Climate Conference (also known as COP21) warns that warmer temperatures and altered precipitation patterns can threaten food production, disrupt transportation systems, and degrade food safety, among other impacts. As a result, international progress in the past few decades toward improving food security will be difficult to maintain.

The report, Climate Change, Global Food Security, and the U.S. Food System, provides an overview of recent research in climate change and agriculture. Led by the U.S. Department of Agriculture and published under the auspices of the U.S. Global Change Research Program, it includes contributors from 19 federal, academic, nongovernmental, intergovernmental, and private organizations in the United States, Argentina, Britain, and Thailand.

“If society continues on a path of high emissions of greenhouse gases, there is no way around the fact that climate change is going to be a primary challenge for producing and distributing food,” said NCAR scientist Claudia Tebaldi, a co-author of the report. “If society lowers emissions, climate change will still be a stressor on food security, but other factors such as socioeconomic conditions could be more critical.”

Two other NCAR scientists—Caspar Ammann and Brian O’Neill—also served as co-authors. The report was produced as part of a collaboration between NCAR, the Department of Agriculture, and the University Corporation for Atmospheric Research, which manages NCAR on behalf of the National Science Foundation. 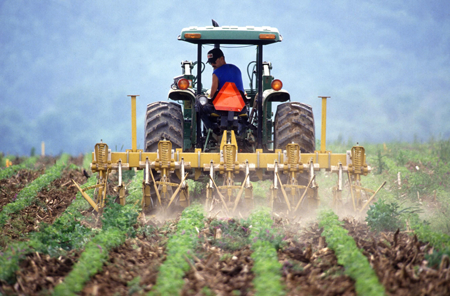 A farmer tills his field. (Photo by Keith Weller, U.S. Department of Agriculture.)

The report focuses on identifying climate change impacts on global food security through 2100. The authors emphasize that food security – the ability of people to obtain and use sufficient amounts of safe and nutritious food – will be affected by several factors in addition to climate change, such as technological advances, increases in population, the distribution of wealth, and changes in eating habits.

“Changes in society and changes in climate will both be critically important to food security in the coming decades,” O’Neill said. “This means we have to do a better job of anticipating possible changes in income, governance, inequality, and other factors, and a better job understanding how they interact with food security and climate change.”

Among the report’s key findings: