BOULDER – The state of Colorado is turning to the National Center for Atmospheric Research (NCAR) to establish an advanced system for predicting wildland fire behavior, including where and how quickly the blazes will spread.

Developed in response to legislation that Gov. John Hickenlooper signed in May, the new agreement finalized this month creates an innovative research and development partnership to generate real-time, 18-hour forecasts of active wildfires in the state. NCAR will work with the Colorado Division of Fire Prevention and Control’s new Center of Excellence for Advanced Technology Aerial Firefighting in Rifle to design and develop the system and begin testing it as early as next year.

“This technology represents the next generation of wildland fire prediction,” said NCAR science manager William Mahoney, who worked with state officials on developing the new agreement. “It will capture some of the critical feedbacks between large fires and the local weather, which often result in extreme fire behaviors that threaten lives and property. Colorado is using homegrown technology to lead the nation in wildland fire prediction.”

The experimental forecast products will draw on powerful NCAR computer simulations and newly available satellite measurements of fires, obtained with a technique developed at the University of Maryland. They will also incorporate observations from Colorado’s Multi-Mission Aircraft.

She added that the technology will be particularly valuable to Colorado because it is being developed with stakeholder input and firefighters’ needs in mind.

NCAR scientist Janice Coen used the CAWFE modeling system to create this simulation of the 2013 Yarnell Hill fire in Arizona, which killed 19 firefighters.  Click here for other wildfire animations. (©UCAR. This image is freely available for media & nonprofit use.)

The system will provide unprecedented detail about interactions between weather and fire, which can create dangers for firefighters on the ground as well as for firefighting aircraft. It will build on a specialized computer model that was developed at NCAR with support by the National Science Foundation, NASA, and the Federal Emergency Management Agency.

Once the system is fully developed and operational, it will be run by the Colorado Division of Fire Prevention and Control.

Wildland fires are highly damaging in Colorado, taking the lives of firefighters and local residents, devastating large areas, and causing hundreds of millions of dollars in damage. Insurance claims from a single blaze, the 2012 Waldo Canyon Fire, totaled more than $450 million.

“This is a revolutionary early-warning system that will better safeguard all of us for years to come,” Kraft-Tharp said.

The lessons learned from the Colorado system are expected to yield benefits for fighting wildfires across the western United States.

Despite the lives and economic costs at risk, the techniques currently available for anticipating fire behavior remain similar to those of past decades. Typically, firefighters infer how fast the edge of a fire will expand based on terrain, fuels, and a measurement or estimate of the winds. But this approach cannot capture changes associated with the interaction of fire and weather.

To accurately forecast a wildland fire in detail, a computer model has to simulate highly localized winds that drive the flames. Adding to the complexity, a major blaze alters local weather, creating winds within the fire that may be more than 10 times stronger than those outside. These internal winds can contribute to potentially deadly accelerations, increases in intensity, unexpected shifts in direction, or splits in which the flames go in multiple directions.

This interplay between fire and weather is particularly pronounced in Colorado and other western states, where clouds produce strong outflows and winds can rush down mountainsides and vary from one valley to the next. 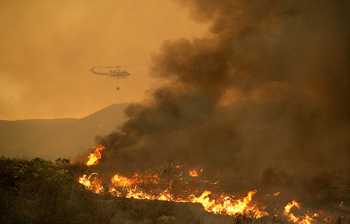 Wildfire is a major concern across Colorado and many other states across the western U.S. (Fire over Camp Pendleton, California, October 23, 2007. U.S. Marine Corps photo by Lance Cpl. Albert F. Hunt, via Wikimedia Commons.)

To tackle this problem, the Colorado forecasting system will use a breakthrough computer model developed by NCAR scientist Janice Coen, who has studied wildland fires for more than 20 years. NCAR’s CAWFE® modeling system (derived from Coupled Atmosphere-Wildland Fire Environment) combines weather prediction with fire behavior simulations to capture the highly complex interplay of fire and weather.

By restarting the model every few hours with the latest satellite and aircraft observations of an active fire—a process known as cycling—Coen and her research partner, University of Maryland professor Wilfrid Schroeder, have shown that it is possible to accurately predict the course of a blaze over the next one to two days. They can keep refreshing the model, making it possible to simulate the entire lifetime of even a very long-lived fire, from ignition to extinction.

“Even though fires are complex and rapidly changing and often described as unpredictable, much of a fire event can be foreseen by this more sophisticated model,” Coen said.