Building trust key to collaboration and adaptation to a changing climate

March 24, 2016 | Indigenous people around the world are often among the first to experience the consequences of extreme weather and climate change. The effects on their lives and livelihoods of sea level rise, changes in farming and fishing seasons, and other environmental impacts often are dramatic. Yet their perspectives are rarely considered in public policy discussions. In many tribal communities, climate change exacerbates a situation already marked by economic hardship, resource loss, and discrimination.

Now in its fourth year, a program hosted by NCAR called Rising Voices brings social and physical scientists and engineers together with Native American community members to build bonds that lead to collaboration on research proposals and projects. The premise is that indigenous peoples experience and understand the changes occurring in their communities, while scientists can provide insight on the underlying causes and how those changes might be managed. 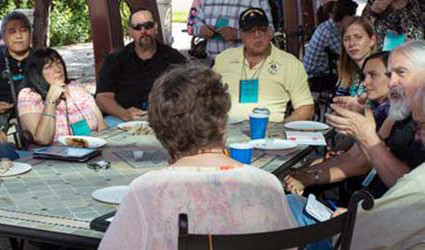 Rising Voices co-founder Bob Gough (far right), speaks at a Rising Voices workshop in Boulder. An attorney and descendant of the Leni Lenape tribe of Delaware, Gough has been involved in Native American and climate change issues for decades. (Photo by Craig Elevitch.)

For NCAR Director Jim Hurrell, indigenous knowledge systems are critical to understanding the current and future impacts of climate variability and change, and "they are especially central to discussions around adaptation strategies. Rising Voices has been tremendously successful in bringing the indigenous and scientific communities together on these issues, and the collaborative efforts that are emerging are going to pay tremendous dividends."

Many of the indigenous communities involved in Rising Voices are already contending with significant impacts. In January, the U.S. Department of Housing and Urban Development announced it would fund a proposal to resettle the Isle de Jean Charles Band of the Biloxi-Chitimacha-Choctaw tribe, a Louisiana Bayou community that has lost virtually all its land due to rising sea levels and to erosion caused by extreme weather as well as human activities such as oil and gas development. This is believed to be the first resettlement in the United States related to climate change. 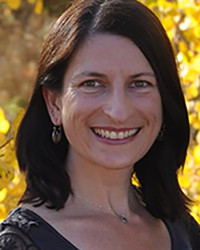 A Native American village in Kivalina, Alaska, is expected to soon face a similar fate, while many tribes in the Southwest are struggling with severe drought and scarce water. Members of both the Isle de Jean Charles and Kivalina tribes participate in Rising Voices.

"Imagine you carve out your cellar in the permafrost and that's how you store your meat in the lean times," Bennett said. "And now imagine the permafrost thaws and your basement is full of water and the structure isn't supported and it falls in. That's what communities in Alaska are dealing with in the interior, with profound permafrost thaw. And it's only going to get worse."

Rising Voices comes at a time of increasing recognition of the role indigenous people play worldwide in climate issues. In 2014, the United Nation's Intergovernmental Panel on Climate Change highlighted how indigenous knowledge and practice, including the "holistic view of community and environment, are a major resource for adapting to climate change."

Eileen Shea, former director of climate services at the National Oceanic and Atmospheric Administration and a participant in Rising Voices since the beginning, said establishing common ground through cultural ceremonies is a critical element of building trust between indigenous people and scientists.

She still remembers a NOAA workshop she helped coordinate in Hawaii in 1998 that opened with a hula chant and dance. Far from being a tourist gimmick, the chants, when translated into English, described how the winds would periodically change direction and bring warmer water near the shoreline, negatively affecting fishing.

Such protocols help to build mutual respect and trust, Shea said. "It puts everyone on a level playing field."

In the case of Rising Voices, "over the years people have felt more comfortable sharing their stories of the weather and storms and ice breaks," Shea said. And, as indigenous people recount how their seasonal weather, along with their hunting and fishing calendars, have changed over the years, "you begin to see some alignment with Western science and history."

The Rising Voices program grew out of a hallway coffee conversation three years ago between Gough and Heather Lazrus, an NCAR environmental anthropologist. At the time, Gough was involved in a project to improve wind-energy predictions and map Indian reservations for potential renewable energy projects. Initially intended as a one-time workshop, Rising Voices received additional funding for subsequent workshops which have been organized by Lazrus, Gough, and Julie Maldonado of the Livelihoods Knowledge Exchange Network. The NCAR Director's Office is the primary funder. Rising Voices has grown from 45 participants at the first workshop to more than 110 at the third annual workshop last July. (NCAR hosted a similar meeting in 2008).

Gough, who grew up clamming and fishing on former tribal homelands on the New Jersey Coast, has been involved in tribal climate and energy issues for several decades. He said that while there are academic efforts to include indigenous people, Rising Voices fills a niche as a community-oriented group that connects tribes to each other and to scientists. Participants have also come from the U.S. National Climate Assessment and the Department of Interior's Climate Science Centers.

In a survey of last summer's workshop participants, nearly two-thirds of respondents said they came away with a stronger appreciation of cultural protocols and knowledge required for partnerships in key areas, including water, relocation, climate cycles, and health and livelihood hazards. More than three-quarters said the workshop supported collaborative scientific-indigenous partnerships "extremely well" or "a lot."

Lazrus said the ultimate goal is for indigenous perspectives to inform science. For example, Rising Voices is a formal partner in NCAR's Engineering for Climate Extremes Partnership, which is developing tools that help communities adapt and build resilience to extreme weather events.

But while outcomes are important, the primary benefits of Rising Voices right now are to encourage connections and collaboration, and to support indigenous science students and early-career scientists. "In those respects," Lazrus said, "Rising Voices is succeeding."