BOULDER – Key factors that can combine to produce a Zika virus outbreak are expected to be present in a number of U.S. cities during peak summer months, new research shows.

The Aedes aegypti mosquito, which is spreading the virus in much of Latin America and the Caribbean, will likely be increasingly abundant across much of the southern and eastern United States as the weather warms, according to a new study led by mosquito and disease experts at the National Center for Atmospheric Research (NCAR).

Summertime weather conditions are favorable for populations of the mosquito along the East Coast as far north as New York City and across the southern tier of the country as far west as Phoenix and Los Angeles, according to computer simulations conceived and run by researchers at NCAR and the NASA Marshall Space Flight Center.

Spring and fall conditions can support low to moderate populations of the Aedes aegypti mosquito in more southern regions of its U.S. range. Wintertime weather is too cold for the species outside southern Florida and southern Texas, the study found.

By analyzing travel patterns from countries and territories with Zika outbreaks, the research team further concluded that cities in southern Florida and impoverished areas in southern Texas may be particularly vulnerable to local virus transmission. 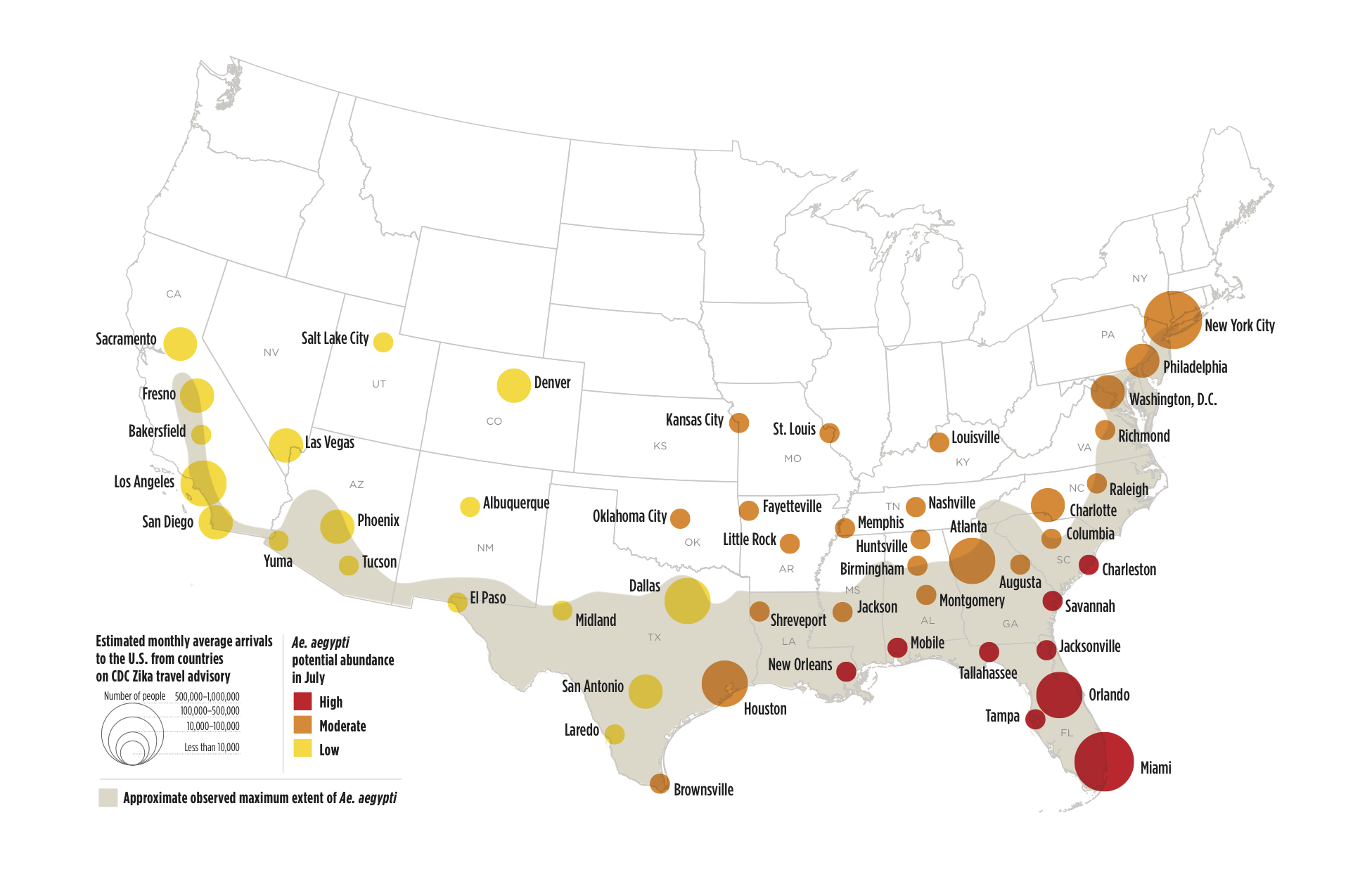 Many U.S. cities face potential risk in summer of low, moderate, or high populations of the mosquito species that transmits Zika virus (colored circles). The mosquito has been observed in parts of the United States (shaded portion of map) and can establish populations in additional cities because of favorable summertime meteorological conditions. In addition, Zika risk may be elevated in cities with more air travelers arriving from Latin America and the Caribbean (larger circles). For a high-resolution map, click here or on the image. (Image based on data mapped by Olga Wilhelmi, NCAR GIS program. This image is freely available for media & nonprofit use.)

"This research can help us anticipate the timing and location of possible Zika virus outbreaks in certain U.S. cities,” said NCAR scientist Andrew Monaghan, the lead author of the study. “While there is much we still don’t know about the dynamics of Zika virus transmission, understanding where the Aedes aegypti mosquito can survive in the U.S. and how its abundance fluctuates seasonally may help guide mosquito control efforts and public health preparedness.”

“Even if the virus is transmitted here in the continental U.S., a quick response can reduce its impact,” added NCAR scientist Mary Hayden, a medical anthropologist and co-author of the study.

Although the study does not include a specific prediction for this year, the authors note that long-range forecasts for this summer point to a 40–45 percent chance of warmer-than-average temperatures over most of the continental United States. Monaghan said this could lead to increased suitability for Aedes aegypti in much of the South and East, although above-normal temperatures would be less favorable for the species in the hottest regions of Texas, Arizona, and California.

Monaghan stressed that, even if Zika establishes a toehold in the mainland United States, it is unlikely to spread as widely as in Latin America and the Caribbean. This is partly because a higher percentage of Americans live and work in air-conditioned and largely sealed homes and offices.

The study is being published today in the peer-reviewed journal PLOS Currents Outbreaks. It was funded by the National Institutes of Health, NASA, and the National Science Foundation, which is NCAR’s sponsor. It was co-authored by scientists at NASA, North Carolina State University, Maricopa County Environmental Services Vector Control Division, University of Arizona, and Durham University.

First identified in Uganda in 1947, the Zika virus has moved through tropical regions of the world over the past decade. It was introduced into Brazil last year and spread explosively across Latin America and the Caribbean, with more than 20 countries now facing pandemics.

About 80 percent of infected people do not have significant symptoms, and most of the rest suffer relatively mild flu- or cold-like symptoms that generally clear up in about a week. However, scientists are investigating correlations between contracting the disease during pregnancy and microcephaly, a rare birth defect characterized by an abormally small head and brain damage.

To determine the potential risk in the mainland United States, the research team ran two computer models that simulated the effect of meteorological conditions on a mosquito’s entire lifecycle (egg, larval, pupal, and adult stages) in 50 cities in or near the known range of the species. Monaghan and several team members have studied Aedes aegypti for years because it also carries the viruses that cause dengue and chikungunya.

Generally, the mosquitoes need warm and relatively stable temperatures, as well as water-filled containers such as buckets, barrels, or tires, for their eggs to hatch. Once a mosquito bites an infected person, it also needs to live long enough – probably a week or more, depending on ambient temperatures – for the virus to travel from the mosquito's mid-gut to its salivary glands. Once in the saliva, the virus can then be transmitted by the mosquito biting another person.

The study results show that, as springtime weather warms, the potential abundance of the mosquito begins to increase in April in the Southeast and some Arizona cities. By June, nearly all of the 50 cities studied have the potential for at least low-to-moderate abundance, and most eastern cities are suitable for moderate-to-high abundance. Conditions become most suitable for mosquito populations in July, August, and September, although the peak times vary by city. Weather conditions in southern and western cities remain suitable as late as November.

Even some cities where the Aedes aegypti mosquito has not been detected, such as St. Louis and Denver, have suitable midsummer weather conditions for the species if it were introduced via transport of used tires or by other human activities, according to the computer models.

The researchers stressed that additional factors outside the scope of the study could affect populations of the species, such as mosquito control efforts, competition with other mosquito species, and the extent to which eggs can survive in borderline temperatures.

The study noted that northern cities could become vulnerable if a related species of mosquito that is more tolerant of cold temperatures, Aedes albopictus, begins to carry the virus.

This animation shows the varying extent to which meteorological conditions can favor populations of the Aedes aegypti mosquito, which transmits the Zika virus, in 50 U.S. cities throughout the year. Red dots represent high-abundance conditions, orange represents medium-to-high, yellow represents low-to-medium, and gray represents no significant mosquito population. (Animation based on data from Andrew Monaghan, NCAR. This image is freely available for media & nonprofit use.)

In addition to looking at meteorological conditions, the researchers studied two other key variables that could influence the potential for Zika outbreaks: travel from Zika-affected areas and socioeconomic conditions in states that may face abundant mosquito populations.

To analyze air travel, the team estimated the number of passengers arriving into U.S. cities on direct flights from airports in 22 Latin American countries and territories listed on the Centers for Disease Control and Prevention’s Zika travel advisory as of January 29.

Cities that had both high potential numbers of Aedes aegypti and a large volume of air travelers included Miami, Houston, and Orlando. Since the scientists were able to obtain passenger numbers for direct flights only, they could not estimate the number of passengers continuing on to smaller cities. They noted that the summertime peak in air travel coincides with the peak season in mosquito abundance.

The study also estimated that nearly five times as many people cross the U.S.-Mexico border per month than arrive by air in all 50 cities. This could indicate a high potential for transmission in border areas from Texas to California, although the Zika virus has not been widely reported in northern Mexico.

Those border areas, as well as other parts of the South where the mosquitoes are expected to be abundant, have a high percentage of households living below the poverty line, according to 2014 U.S. Census data analyzed by the research team. Lower-income residents can be more exposed to mosquito bites if they live in houses without air conditioning or have torn or missing screens that enable mosquitoes to enter their homes more easily. However, Aedes aegypti populations tend to thrive in densely populated urban areas, while some of the most impoverished areas are rural.

“The results of this study are a step toward providing information to the broader scientific and public health communities on the highest risk areas for Zika emergence in the United States,” said Kacey Ernst, an epidemiologist at the University of Arizona and co-author of the study. “We hope that others will build on this work as more information becomes available. All areas with an environment suitable to the establishment of Aedes aegypti should be working to enhance surveillance strategies to monitor the Aedes aegypti populations and human populations for disease emergence.”

“This research highlights the complex set of human and environmental factors that determine whether a mosquito-borne disease is carried from one area to another, and how severely it affects different human populations,” said Sarah Ruth, program director in the National Science Foundation’s Division of Atmospheric and Geospace Sciences. “By integrating information on weather, travel patterns, mosquito biology, and human behavior, the project team has improved our ability to forecast, deal with, and possibly even prevent future outbreaks of Zika and other serious diseases.”

Title: On the seasonal occurrence and abundance of the Zika virus vector mosquito Aedes aegypti in the contiguous United States