A CO2 milestone in Earth's history 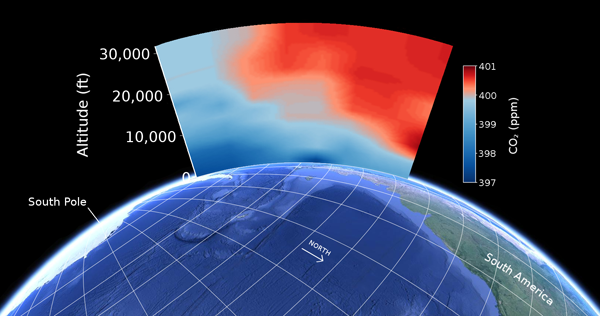 May 12, 2016 | Earth’s atmosphere is crossing a major threshold, as high levels of carbon dioxide (CO2)—the leading driver of recent climate change—are beginning to extend even to the globe's most remote region. Scientists flying near Antarctica this winter captured the moment with airborne CO2 sensors during a field project to better understand the Southern Ocean's role in global climate.

This illustration shows the atmosphere near Antarctica in January, just as air masses over the Southern Ocean began to exceed 400 parts per million of CO2. The 400 ppm level is regarded as a milestone by climate scientists, as the last time concentrations of the heat-trapping gas reached such a point was millions of years ago, when temperatures and sea levels were far higher.

The field project, led by the National Center for Atmospheric Research (NCAR) and known as ORCAS, found that there is still air present in the Southern Hemisphere that has less than 400 ppm of CO2—but just barely. In the north, the atmosphere had first crossed that threshold in 2013, as shown by observations taken at Mauna Loa, Hawaii, by the National Oceanic and Atmospheric Administration and Scripps Institution of Oceanography.

Most fossil fuels are burned in the Northern Hemisphere, and these emissions take about a year to spread across the equator. As CO2 increases globally, the concentrations in the Southern Hemisphere lag slightly those further north.

"Throughout humanity, we have lived in an era with CO2 levels below 400 ppm," said Ralph Keeling, director of the CO2 Program at the Scripps Institution of Oceanography and a principal investigator on ORCAS. "With these data, we see that era drawing to a close, as the curtain of higher CO2 spreads into the Southern hemisphere from the north. There is no sharp climate threshold at 400 ppm, but this milestone is symbolically and psychologically important."

The air found by ORCAS with less than 400 ppm of CO2 was located in a wedge at lower altitudes. At higher altitudes, the air had already exceeded 400 ppm. This pattern is mostly a consequence of the way the air circulates in the region. At these southerly latitudes, the air arrives from the Northern Hemisphere at higher elevations and then mixes downward.

Emissions of CO2 have been increasing since the 19th century.

The measurements were taken by instruments operated by NOAA, NCAR, Scripps, Harvard University, and the University of Michigan. Scripps scientist Eric Morgan created this illustration. ORCAS was funded by the National Science Foundation.

"This is the last we'll see of sub-400 ppm CO2 in the Southern Hemisphere, unless we're able to some day achieve negative emissions," said NCAR scientist Britton Stephens, co-lead principal investigator for ORCAS. "While 400 is just a number, for someone who was born when the atmosphere held 327 ppm of CO2, it’s certainly a reminder of our steadily increasing emissions and failure thus far to do enough to reduce them."

The illustration was created by interpolating 20 profiles measured on Feburuary 5 and 8, 2016. The vertical axis has been increased for better visibility. The image is freely available for nonprofit and media use. Please credit Eric Morgan, Scripps Institution of Oceanography.