Flights can inadvertently generate rain and snow near airports

BOULDER—Researchers have found that areas near commercial airports can sometimes experience a small but measurable increase in rain and snow when aircraft take off and land under certain atmospheric conditions.

The new study led by the National Center for Atmospheric Research (NCAR), is part of ongoing research that focuses on so-called hole punch and canal clouds that form when planes fly through certain mid-level clouds, forcing nearby air to rapidly expand and cool. This causes water droplets to freeze to ice and then turn to snow as they fall toward the ground, often leaving behind odd-shaped gaps in the clouds. 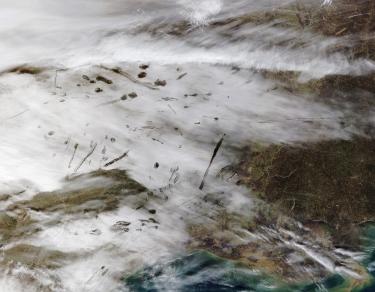 The research team used satellite images and weather forecasting computer models to examine how often this type of inadvertent cloud seeding may occur within 62 miles (100 kilometers) of six commercial airports: London Heathrow, Frankfurt, Charles De Gaulle (Paris), Seattle-Tacoma, O’Hare (Chicago), and Yellowknife (Northwest Territories, Canada), as well as Byrd Station in Antarctica. They found that, depending on the airport and type of plane, the right atmospheric conditions typically exist up to 6% of the time, with somewhat more frequency in colder climates.

The lead author, NCAR scientist Andrew Heymsfield, says this phenomenon likely occurs at numerous other airports, especially in mid- and high-latitude areas during colder months. The key variable is whether there are cloud layers in the vicinity that contain water droplets at temperatures far below freezing, which is a common occurrence.

He adds that more research is needed before scientists can determine whether the precipitation produced by this effect is significant. The inadvertent cloud seeding may increase the need to de-ice planes more often, he adds.

“It appears to be a rather widespread effect for aircraft to inadvertently cause some measureable amount of rain or snow as they fly through certain clouds,” Heymsfield says. “This is not necessarily enough precipitation to affect global climate, but it is likely to be noticeable around major airports in the midlatitudes.”

The researchers did not estimate the total amount of rain or snow that would result from such inadvertent cloud seeding. However, they analyzed radar readings that, in one case, indicated an enhanced snowfall rate of close to an inch an hour after several planes had passed through.

The study is being published this week in the journal Science. Researchers from NASA Langley Research Center and the University of Wyoming, Laramie, co-authored the paper. Funding came from the National Science Foundation, which is NCAR’s sponsor, and from NASA.

Andy Heymsfield describes research that links aircraft of all kinds with a slight increase in rain or snow near airports—when the conditions are just right. (©UCAR. This video is freely available for media use. For more information, see Media & nonprofit use.*)

Scientists for decades have speculated about the origins of mysterious holes and canals in clouds. Heymsfield led a study last year establishing that the gaps, which sometimes look as though a giant hole punch was applied to a cloud, are caused when aircraft fly through midlevel clouds that contain supercooled droplets.

When a turboprop plane flies through such a cloud layer with temperatures about 5 degrees Fahrenheit or lower (about -15 degrees Celsius or lower), the tips of its propellers can cause the air to rapidly expand. As the air expands, it cools and causes the supercooled droplets to freeze into ice particles that evaporate the droplets and grow, falling out of the clouds as snow or rain.

Jet aircraft need colder temperatures (below about -4 to -13 degrees F, or -20 to -25 degrees C) to generate the seeding effect. Air forced to expand over the wings as the aircraft moves forward cools and freezes the cloud droplets.

The effect is unrelated to the trails of condensed water vapor known as contrails made by the exhaust of jet engines. Contrails occur at colder temperatures of -40 degrees F (-40 degrees C) or below.

In the new research, the study team used cloud measurements taken by the NASA CALIPSO satellite to quantify how often such conditions exist within about 62 miles of several airports located in relatively cloudy areas. They chose the 62-mile radius because that is approximately the distance it takes for a commercial aircraft to climb above about 10,000 feet, where many of the supercooled cloud layers are located.

Of the major, mid-latitude airports studied, they found that the Frankfurt, DeGaulle, and O’Hare airports most frequently experienced the right conditions for propeller aircraft to generate precipitation. In each case, the conditions existed more than 5% of the time over the course of a year. The researchers found that the right conditions existed more than 3% of the time for jets at Heathrow, Frankfurt, and Seattle-Tacoma.

Yellowknife experienced such conditions more often, about 10% of the time for propeller planes and 5% for jets, presumably because of colder cloud conditions at higher latitudes. Byrd often experienced the very cold conditions that enable jets to cause inadvertent cloud seeding.

The researchers also found that a diverse range of aircraft can induce precipitation. By comparing observations of hole-punch and canal clouds made by a National Oceanic and Atmospheric Administration (NOAA) satellite with flight path records from the Federal Aviation Administration, they confirmed that commercial jets (such as Boeing 757s and the McDonnell Douglas MD-80 series of jets), military aircraft (B-52s), various regional and private jets, turboprops, and prop/piston planes all can induce precipitation.

“It appears that virtually any airplane that flies through clouds containing liquid water at temperatures much below freezing can cause this effect,” Heymsfield says. 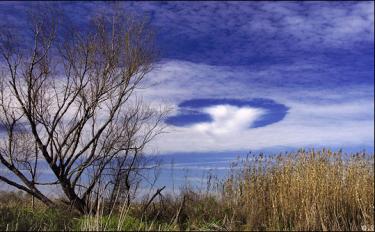 A hole-punch cloud over southern Louisiana in 2007. (Image ©2007 yesitspuzzling.)

Satellite readings analyzed by the team showed that holes and canals generated by aircraft can occur with some frequency. For example, an extensive cloud layer over Texas on January 29, 2007, contained 92 such gaps, some of which persisted for more than four hours and reached lengths of 60 miles or more.

Heymsfield and his colleagues also used a powerful software tool, known as the Weather and Research Forecasting model, to learn more about how the holes form and develop. They found that the hole rapidly spreads about 30 to 90 minutes after an aircraft passes through. This would be the peak time for precipitation associated with the cloud-seeding effect. After about 90 minutes, ice and snow begin to dissipate.

Title: Formation and Spread of Aircraft-Induced Holes in Clouds