15 July 2011  •  At least this year they didn't bring hockey sticks! In late June I attended the Heartland Institute’s 6th International Conference on Climate Change (ICCC) in Washington DC. This was the second time the organizers invited me to the conference. Every attendee at last year’s conference was handed a two-foot-long hockey stick to reinforce Heartland’s complaints about what they see as an incorrect interpretation of published 1000-year temperature proxy reconstructions. Perhaps unsurprisingly, nearly every speaker at the meeting denounced the climate change science consensus, lambasted mitigation policy, or delved into details about solar cycles and natural climate variability. 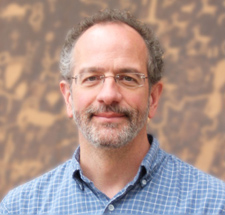 Scott Denning is a professor of atmospheric science at Colorado State University.

This year Heartland senior fellow James Taylor invited me to present at ICCC, even though he knew I would deliver a very strong and persuasive case for the physical basis of anthropogenic climate change and the dire need for an aggressive policy response. At the meeting, I was treated with respect and even warmth despite my vehement disagreement with most of the other presenters. Heartland gave me a very prominent platform: both an hour-long keynote debate over lunch with Prof. Roy Spencer and a 15-minute plenary presentation in the final panel of the meeting.

In recent weeks I’ve received a number of emails from scientists and others suggesting that attending the ICCC is a mistake. Their argument is that the Heartland attendees are not acting in good faith, that I would be misquoted or quoted out of context to support Heartland’s position, that my presence would be seen as endorsing the denial of climate change, or that “it only encourages them.”  I disagree.

Refusing to engage dismissive voices on climate change may feel like taking the high road, but I suspect it’s the high road to ruin. Ignoring climate contrarians has not made them go away. In fact, their message has resonated with an increasing slice of public opinion for several years. Tony Leiserowitz (Yale University) and colleagues survey public opinion on climate change and find persistent and growing segments of the American public that are doubtful or dismissive about the human role in climate change. It seems to me that strong and persuasive engagement of that audience by more bona fide experts articulating the scientific consensus is essential.

Communicating climate science to nontechnical audiences is not for everybody, and overcommitted scientists may well choose to spend precious time in other ways.  We have all seen presentations that suffer from overuse of jargon, or complicated graphics with unreadable titles and unintelligible lines that look like multicolored spaghetti. Another example of “what doesn’t work” for an audience like this is the condescending argument from authority that presumes that the Earth’s climate is too complicated for ordinary people to understand, so that they have to trust the opinions of experts. 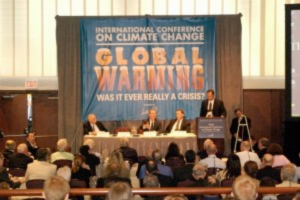 “Was it ever really a crisis?” asks a banner displayed during one 2011 ICCC session. (Photo by Scott Denning.)

Trust is, in fact, almost completely missing in a dialog about climate change with a dismissive group. Appeals to “overwhelming scientific consensus” are more likely to confirm the audience’s suspicions of some kind of nefarious conspiracy than to change minds. Even the concept of peer review can sound sinister.

How then, to meaningfully engage climate-change contrarians in a way that is informative, persuasive, and productive? Here are some lessons from my experiences:

Begin from common ground. At ICCC I proposed that we could all agree that “we need public policy based on facts, rather than facts based on a political agenda,” and received thunderous applause. Rather than start with time-series graphs that all turn up sharply at the end, I started with a question: “Did you ever wonder why it’s warmer during the day than at night? Warmer in summer than winter? Warmer in Miami than Minneapolis?” The answer is that when more heat is added to the Earth’s surface than subtracted, temperatures rise. If you don’t like the weather, wait five minutes. But if you don’t like the climate, you’ll have to move. Climate changes very slowly and is very predictable. We can predict that the world will warm in the 21st century for precisely the same reason that we can predict that Miami is warmer than Minneapolis, and with the same kind of confidence.

Engage the audience on a human level. I tell jokes. I wiggle and dance and make funny noises on stage to imitate the absorption of thermal radiation by greenhouse gas molecules. I explain that climate and global change is not rocket science, that each and every one in the audience is plenty smart enough to understand the basic physics of climate change from their own everyday experience. I invoke ordinary examples from daily life in almost every slide. I build credibility and a personal connection with the audience, and when it is time, I seek to challenge their preconceptions from this base of trust.

Emphasize the basics. Here are some relevant facts that are not in dispute:

Taken together, these indisputable facts lead to the conclusion that continued burning of fossil fuels will warm the climate. You don’t have to believe experts, and there doesn’t have to be an overwhelming consensus behind them. It just makes sense for the same reason that a teapot placed on a hot stove will get hot.

There are billions of people on Earth who use very little fossil fuel, and they fully intend to develop their economies to lift their children from abject poverty. Who can blame them?

I believe what’s needed is a new system of energy and economics that delivers a decent standard of living to billions and billions of people but doesn’t require semi-permanent alteration of the Earth’s climate through fossil fuel combustion. The world will need a way to produce vastly more energy than we do now to support those billions. And with double-digit rates of annual economic growth in the developing world, this new system of post-fossil energy will need to be in place sooner than later.

Solving this challenge will require everyone’s ingenuity. As Ralph Cicerone, president of the U.S. National Academy of Sciences, has said, “Scientists are necessary but not sufficient to solve the climate problem.” Scientists have a role to play in understanding and communicating about this problem, but we have no special status to prescribe solutions. There are legitimate differences of opinion about what should be done about climate change, and the political problems are international, intergenerational, and extremely difficult.

Within the ICCC audience, there was a strong and obvious identification with libertarian and free-market political ideology. Talking to other attendees, it was obvious that a lot of them really believe that predictions of ill effects of climate change are a stalking horse for intrusive government policies.

The challenge I presented to them is that the world needs their ideas to solve one of the most pressing problems humanity has ever faced. If they continue to argue the minute details of tenths of watts of solar heating, then all of the proposed solutions to the climate problem will come from the other end of the political spectrum. We’re unlikely to find the energy for billions of citizens of newly developed economies by writing GM a check to build the Volt, or by mandating compact fluorescent light bulbs. If Heartland and Heritage and Cato will not argue for market-based solutions, who will?

I didn’t pull any punches at the ICCC in making my case, and they applauded. The organizers understood that I would challenge their audience like this, and they offered me not one but two high-profile opportunities to do just that. They posted my remarks on their website and live-streamed the video feed around the world. James Taylor wrote a wonderful response in his blog at Forbes.com. Dozens of participants thanked me for presenting, and told me they’d needed to hear this “other side” of the story of climate change.

There remains a huge gap between the pieces of common ground I found with the ICCC and the reluctance of climate-change doubters to recognize the gravity of the climate problem. Indeed, the backdrop used in one of the sessions included the question “Global Warming: Was It Ever Really a Crisis?”

If there is to be any hope of bridging this gap, it will take the committed and respectful participation of mainstream climate scientists in settings that may lie outside their comfort zones. James Taylor says he has invited dozens to attend ICCC and has been almost completely unsuccessful. It seems to me that strong, persuasive engagement of the dismissive segment of the public is important and can be effective. I would certainly do this again, and I would encourage like-minded colleagues who can afford the time to join me.

Correction - 19 July 2010 | The institutional affiliation of Tony Leiserowitz has been corrected; it is Yale University.