Winter driving: Where the rubber meets the road

What if the vehicles ahead of you could send weather data to a smart system, warning you of ice or fog just ahead?

November 17, 2011  • There's nothing unusual these days about using a mobile device to check for traffic jams or road closures ahead, especially when winter weather creates chaos out of a daily commute. But new technology being developed at NCAR might take this vital information to another level. 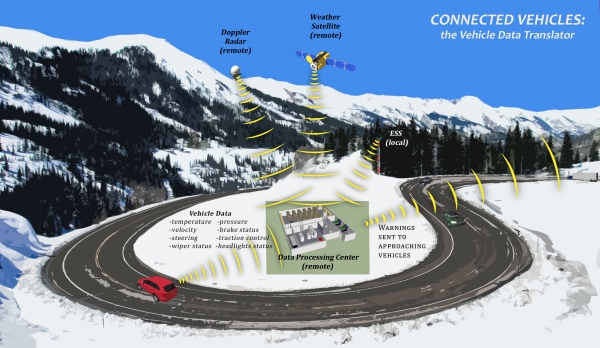 Alerting drivers. The prototype Vehicle Data Translator aims to improve driving safety by warning motorists about nearby hazards. Information about adverse conditions would be automatically transmitted from vehicles to a remote data processing system. The system would incorporate weather information from other sources, including radars and satellites, and then send alerts to drivers in the area. (©UCAR. Illustration by Lex Ivey. This image is freely available for media & nonprofit use.*)

“What you really want to know isn't just the general weather conditions in the 20-mile zone around you," says NCAR scientist Sheldon Drobot. “You want to know what’s going on at the next street corner, and should you go left or right at the light.”

Drobot manages a research program on surface transportation in NCAR’s Research Applications Laboratory. For the past few years, he and his colleagues have been developing and testing an innovative technological system that will eventually help protect drivers from being surprised by black ice, fog, and other hazardous weather conditions.

The prototype system, which is called the Vehicle Data Translator and sponsored by the U.S. Department of Transportation’s Connected Vehicle and Road Weather Management Programs, gathers detailed information about weather and road conditions from moving vehicles. Within the next decade, it should enable motor vehicles equipped with wireless technology to transmit automated updates about local conditions to a central database, which will then relay alerts to other drivers in the area.

“The goal is to reduce crashes, injuries, and deaths by giving drivers information about nearby hazards,” Drobot says. “The system will tell drivers what they can expect to run into in the next few seconds and minutes, giving them a critical chance to slow down or take other action.”

In 2009, the research team tried out the system in the Detroit area, where test drivers in 11 cars equipped with sensors sought out adverse winter road conditions. The NCAR team then analyzed the reliability of the system by comparing data from the cars with weather observations from radars and satellites, and used the information to build the algorithms, or mathematical formulas, for the Vehicle Data Translator software.

This winter, the team is taking the project to Minnesota and Nevada, where they will outfit state Department of Transportation snowplows and supervisor trucks with sensors. Eighty vehicles in Minnesota and 16 in Nevada will measure temperature, pressure, humidity, and other weather variables as their drivers go about their routine jobs. The researchers are also keeping sensors on hand at NCAR’s headquarters in Boulder, Colorado, so that they’re ready to drive up Vail Pass when storms hit. The pass maintains a road weather station that will give the team another baseline for verifying the vehicle sensors.

The science behind precision forecasting

The way the system will work, once operational, is that an onboard digital memory device will collect both weather data, such as temperature, and indirect indications of road 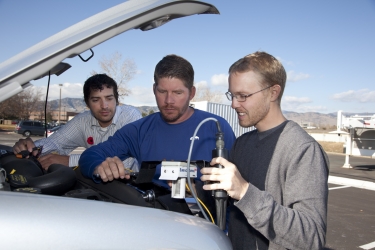 NCAR researchers Sheldon Drobot, Michael Chapman, and Brice Lambi install a sensor in a vehicle as part of testing for the Vehicle Data Translator system. (©UCAR. Photo by Carlye Calvin.)

conditions, such as windshield wipers being switched on or the activation of antilock brakes. This information will be transmitted to a central database, where it will be integrated with other local weather data and traffic observations, along with details about the road's surface material and alignment. Drobot explains that incoming data would be anonymous to protect the privacy of drivers, and drivers would likely have the option to opt out.

The processed data would then be used to warn motorists about upcoming hazards—everything from icy roads to a nearby vehicle that’s driving erratically—and even suggest alternative routes. The system would also alert emergency managers to hazardous driving conditions and help road crews clear snow more efficiently.

One of the team’s biggest challenges is figuring out how to process the enormous amounts of data that could be generated by about 300 million motor vehicles. NCAR has worked with the Department of Defense, the aviation industry, and other organizations to analyze complex weather observations. But the new system incorporates information from far more sources—and those sources are constantly on the move.

The team is refining its algorithms and other techniques for accurately interpreting data and eliminating misleading indicators. If a driver, for example, turns on the windshield wipers in clear weather to clean the windshield, the system will identify that action as an outlier rather than issuing a false alert about precipitation.

"It's not enough to process the information almost instantaneously," says NCAR program director William Mahoney. "It needs to be cleaned up, sent through a quality control process, blended with traditional weather data, and eventually delivered back to drivers who are counting on the system to accurately guide them through potentially dangerous conditions."

The research team will use the data from this winter’s tests in Minnesota and Nevada to continue to develop the software. They're hoping to have a program ready for operational field testing by winter 2012–13, according to Drobot.

In 2013, the National Highway Traffic Safety Administration plans to use the results of pilot tests to determine whether the technology is mature enough to encourage vehicle manufacturers to include the equipment in new passenger vehicles. For example, manufacturers could earn higher government safety ratings for vehicles that support the technology.

The NCAR-developed software would then be made available to private vendors, according to Drobot. "We have a long history of transferring technology to public use. We want to see our efforts implemented in the real world," he says.