February 7, 2012  •  Researchers looking for images to help analyze and illustrate critical weather events may  find what they’re looking for at the Meteorological Case Study Selection Kit, a website  maintained by David Ahijevych and colleagues in NCAR’s Mesoscale and Microscale  Meteorology Division.   Choose a date from the last 15 years, and the kit provides a sampling of satellite images,  radiosonde soundings, upper-air and surface maps, and severe weather reports from the  NOAA Storm Prediction Center, with emphasis on the central United States. 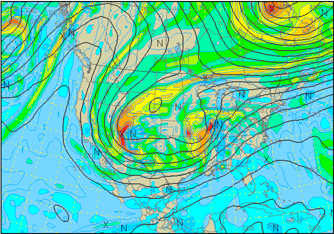 The Meteorological Case Study Selection Kit includes graphics and data for such events as the snowstorm that pummeled the Midwest on February 1–2, 2011. (Image from the NCAR/RAL Real-Time Weather Data site.)

Many of the maps were created at the popular RAL Real-Time  Weather Data site, operated by NCAR’s Greg Thompson at NCAR’s Research Applications  Laboratory. The RAL site began archiving all of its satellite, surface, upper-air, and model graphics in mid-2009, says Thompson, but that archive is not yet publicly accessible due to funding constraints.

Although the case-study site has been operating since the late 1990s, the number of visits per day has more  than doubled since 2008, according to Ahijevych. He says that most of the users hail from the  large meteorology communities along the Colorado Front Range and in Norman, Oklahoma,  but that there are a fair number of downloads by people in private industry and the general public.