Researchers tackle a dangerous and mysterious form of in-flight icing

May 11, 2012  •  With the help of deicing treatment on the ground and careful route selection in the air, commercial pilots now avoid most of the threat that ice will encase critical parts of a plane. But there’s another ice-related hazard gaining attention, one so low-profile up to now that the aviation community has yet to settle on what to call it.

For an overview of the development of tools at NCAR to predict in-flight icing, see the related feature in our in-depth package "From Science to Impact."

It turns out that ice can not only build up on a plane’s wings; it can also do so inside sensitive parts of an aircraft engine. Pilots and scientists long dismissed this scenario, since the heat of an engine would presumably prevent any ice build-up. However, there’s growing evidence that icing resulting from ingestion of ice crystals can lead to brief engine shutdowns and interfere with pitot tubes, the heated devices attached to the fuselage that monitor a plane’s speed.

Pitot icing from ice crystals may have been a factor in the loss of 228 people when an Airbus 330 plummeted into the South Atlantic Ocean after flying through storms off the Brazilian coast on June 1, 2009. Flight data recorder information retrieved from the black boxes of the aircraft has confirmed that the aircraft speed sensors malfunctioned directly before the accident and may have contributed to the events culminating in the apparent fatal stall. The final report from the French accident investigation bureau is expected to be released within months.

About 150 cases of partial or complete engine power loss (as it’s often labeled within the industry) from the last several decades have now been linked to the still-mysterious phenomenon of icing in the engine compressor. In nearly all cases, the engines were restarted within a minute or two, and passengers were none the wiser, but the rising tally of events is a worrisome flag for the aviation community. Although the events span a wide range of locations and altitudes, there are enough common threads to give hope that a warning and avoidance system might be feasible. 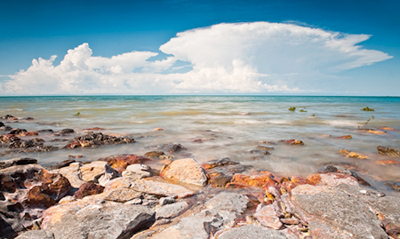 A field project in early 2013 will study engine-related icing with flights from a base in Darwin, Australia, where offshore thunderstorms form so reliably that World War II pilots gave them a name: Hector, also known as "Hector the Convector." (Photo © Jacci Rose Ingham.)

NCAR is part of an international team looking into the science of engine icing events in the multiyear Study of High Ice Water Content Regions of Deep Convection (HIWC). The focus of HIWC will be a three-month field campaign (January to March 2013) based in Darwin, Australia, where intense thunderstorms occur each summer. As a Gulfstream II jet operated by a NASA contractor weaves its way through anvil regions that extend from the tops of vast oceanic storm complexes, it will gather data on areas with high concentrations of minuscule ice crystals—the conditions that appear to be most effective in getting ice into engines.

The data will be used to evaluate proposed certification envelopes, now out for industry review, from the Federal Aviation Administration (FAA) and the European Aviation Safety Agency. The observations will also provide a rich and unique data set for improving understanding of deep convective clouds, including thunderstorms.

The field work is being organized by NASA, Environment Canada, the Australian Bureau of Meteorology, and the FAA, with forecasting tools developed by NCAR (see below). Other parties sponsoring and contributing to the overall HIWC effort include Transport Canada, National Research Council Canada, the aircraft manufacturers Boeing and Airbus, and Science Engineering Associates.

Ice and the tropics might seem like an incongruous pair, but cold-topped thunderstorms are common at low latitudes, and Darwin is a well-chosen launch pad for the HIWC field phase. The largest global share of engine icing reports is from the vicinity of Southeast Asia. Since 2000, air traffic across the Pacific has increased more than fivefold, which may be an important factor. Another is the region’s toasty seawater, the warmest on Earth for such a large area, which helps fuel massive mesoscale convective systems (MCSs).

Over land, deep convection is well known to have intense cores associated with actively building cells that may include copious lightning, strong updrafts, and hail. Aircraft typically avoid these potential hazards by vectoring around areas of high reflectivity indicated on the pilot’s radar. However, in oceanic deep convection, these high-reflectivity areas are less commonly seen at high altitude, and lightning is rare. 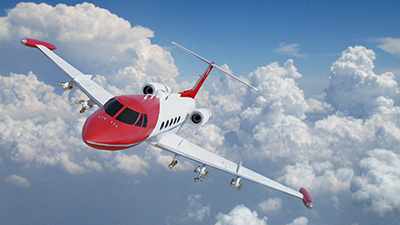 To learn more about engine event cases, Environment Canada and its industry counterparts have sifted through the scientific literature and available data from research flights and carried out a number of interviews with engine event pilots. They’ve concluded that aircraft are flying directly across large MCSs through oceanic updraft areas without noting high radar reflectivity regions on their radars or experiencing highly vigorous updrafts. At the same time, these aircraft are encountering very high ice concentrations associated with the deep lift and condensation of moist tropical air. This hypothesis is supported by the data from exploratory flights conducted with an industry test aircraft out of Darwin in 2010, where surprisingly high values of ice concentration were commonly observed in the absence of strong radar returns at altitude.

Investigators will take a more detailed look at such conditions during the 2013 Darwin flights. The project chose the Gulfstream II in part because its engines have no history of ice accretion events. HIWC will also minimize risk by incrementally exposing the aircraft and engines to progressively longer periods of flight into regions with large amounts of ice.

“Our intention is to get in, sample, get out, do some evaluations on the engines, then go back in,” says Tom Ratvasky, an HIWC principal investigator based at NASA’s Glenn Research Center. Once this build-up process is completed, he adds, longer paths through dense ice clouds can be flown with greater confidence to meet the science plan objectives.

The secrets of accretion

Although many questions remain about what makes an engine icing event happen, it’s believed that tiny ice crystals—perhaps many of them smaller than 0.004 inches (100 microns)—accumulate in large enough numbers to counterbalance the heat of an engine’s interior.

Pilot reports are also helping shed light on what’s happening during engine power-loss events. In many cases, pilots report they have seen and heard “rain on the windscreen,” a spattering most likely caused by tiny crystals melting on impact. Although temperatures are quite cold at these altitudes, sometimes as frigid at –58°F (–50°C), many aircraft have reported encountering air that’s up to 54°F (30°C) warmer than that just before an engine power-loss event, followed by a rapid temperature drop as the plane flies onward. These temperature changes, although initially misinterpreted as an atmospheric phenomenon, are in fact another example of a malfunction caused by ice crystals—in this case, the crystals accumulating and melting in the heated instrument housing where the temperature sensor resides.

“We’ve been able to replicate those temperature anomalies in a couple of ground test facilities,” says Ratvasky. “I’m really interested in finding these in flight.”

By getting to the root of accretion events, HIWC stands to make headway on some longstanding questions about cloud physics. While many field studies have explored oceanic storms, few have taken aircraft into the updrafts at the heart of these storms. There’s only skimpy data on how water droplets and ice crystals evolve and interact in these regions, and models cannot yet simulate the processes.

HIWC is also being shaped by laboratory work. At a lab run by the National Research Council Canada (NRC) lab in Ottawa, researchers are injecting ice crystals into a warm tunnel the width of a shoebox, attempting to replicate what happens to ice inside the compressor section of an engine. Later this year, NASA Glenn will conduct initial validation tests in its Propulsion Systems Laboratory, a facility recently upgraded to allow ice crystals to be pulled into an actual operating jet engine at altitude conditions.

Ratvasky and colleagues have worked to define and organize all aspects of the flight program, including pulling together instruments for the G-II flights. The HIWC aircraft will be equipped with six underwing pylons to house nine particle measurement probes, a variety of systems to measure bulk liquid and total water content, a next-generation pilot’s radar, and a research cloud radar. The team has worked for four years to improve the reliability and accuracy of cloud physics instruments in the harsh environment linked to high ice water content, including tests in a calibrated high-speed ice simulation wind tunnel at the NRC. A new isokinetic evaporator was designed by NRC and Environment Canada as the primary tool for measuring total water content in the HIWC field phase. It’s capable of measuring up to 10 grams of ice per cubic meter at flight speeds of 450 mph (200 meters per second) to the accuracy demanded by industry sponsors.

The NCAR team that’s worked on forecasts of in-flight icing for years (see sidebar) is now applying its toolbox to the problem of predicting regions fertile for ice crystal icing. The immediate goal for the 2013 HIWC field campaign is to prepare a nowcasting system, dubbed ALPHA (Algorithm for Prediction of HIWC Areas). The group carried out a two-week nowcasting exercise this past March with local forecasters in Darwin to prep for next year’s field phase. 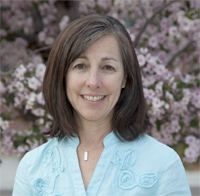 Julie Haggerty is leading the effort at NCAR to develop nowcasting tools for the HIWC project. (©UCAR. Photo by Carlye Calvin. This image is freely available for media & nonprofit use.)

“Right now we’re using some of the basic observations from people who have analyzed the 150 engine power-loss events to date,” says Julie Haggerty, the NCAR project lead and another principal investigator for HIWC. “We’re using routinely available sources of meteorological data and trying to pinpoint where a model or a satellite product shows evidence of HIWC conditions.”

There are plenty of clues from satellite imagery pointing to where convection is strongest. For example, when powerful updrafts punch through a storm’s shield of ice crystals, they can produce a bright bubble of cumulus called an overshooting top. However, the zones of interest to HIWC, those packed with many tiny ice crystals, don’t lend themselves to easy recognition from satellites. Even when an aircraft enters such a zone, the small size of the ice crystals may produce only an innocuous signal on radar, often as weak as 20 dBz (decibels of reflectivity) or less. (The strength of the signal returning from an object drops by a thousandfold if the object’s diameter is cut in half.)

Even if a region prone to engine icing were easy to spot, it might not last for long. It’s believed that some zones of high ice content may span less than 20 miles (32 kilometers) and exist for less than an hour. That adds to the challenge facing NCAR’s forecast development team and HIWC itself. “We’re specifically trying to find regions that are small scale and short lived,” says Haggerty.

If the project does live up to its promise, it could lead to new regulations on how aircraft engines are built and new flight guidance for pilots, perhaps building on the ALPHA system now being created at NCAR. There could also be improvements in the weather prediction models that are small-scale enough to resolve clouds.

Participants are stressing the power of teamwork in making progress on the insidious, understudied problem of engine core icing. “This is by far one of the most collaborative efforts I’ve seen,” says NASA’s Ratvasky. “There’s no way any one organization could do this project by itself.”