Getting the drop on storms

June 1, 2012  •  Whenever NOAA’s National Hurricane Center (NHC) warns millions of coastal residents about a potential storm, one of the tools backing up the decision is a small and highly sophisticated instrument package developed at NCAR. Dozens of these packages, known as dropsondes, are released at high altitudes by “hurricane hunter” aircraft to transmit data on temperature, pressure, humidity, and wind while descending by parachute through tropical storms and hurricanes. 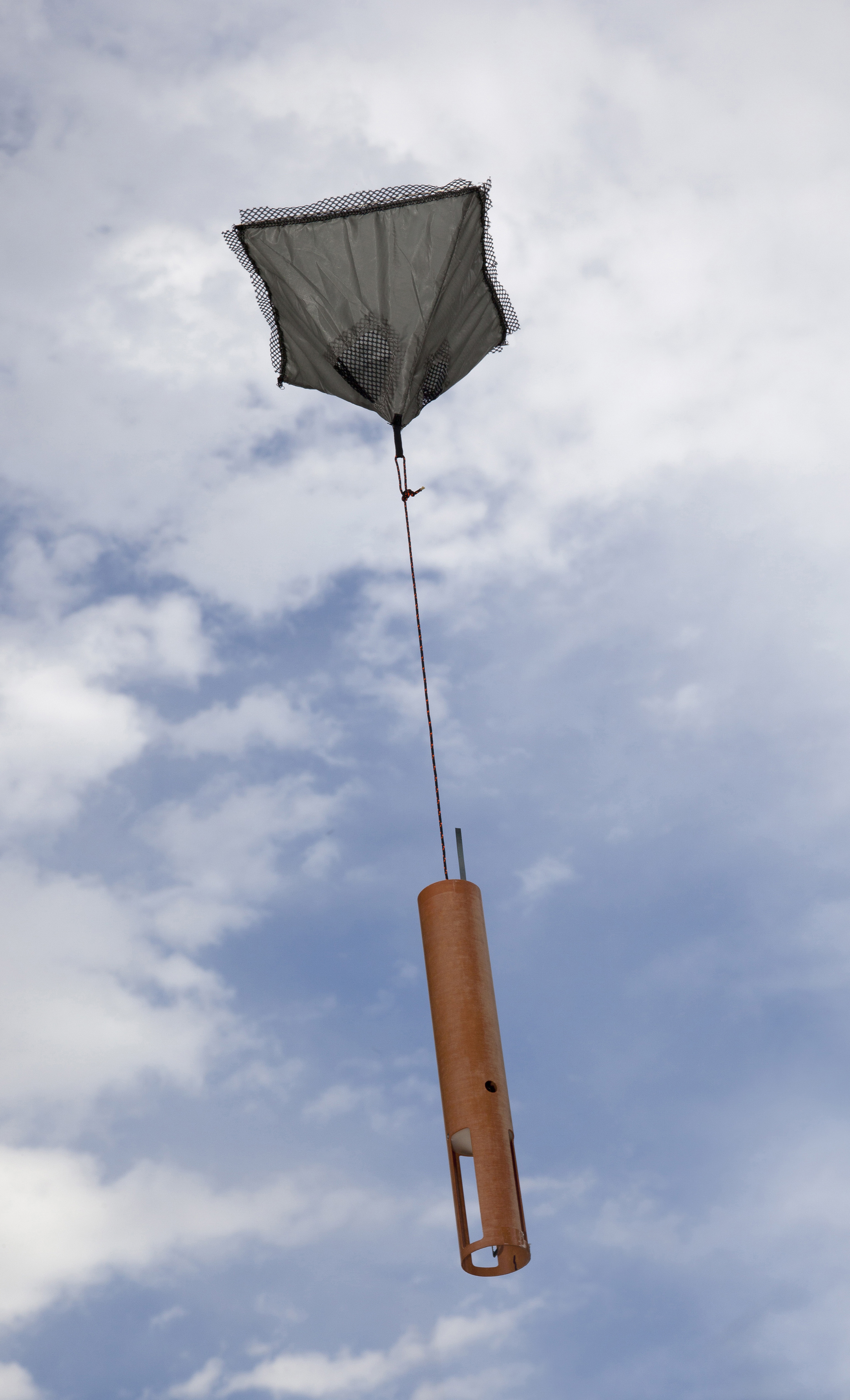 Each dropsonde descends via a specially designed parachute that opens shortly after its deployment. (©UCAR. Photo by Carlye Calvin. This image is freely available for media & nonprofit use.)

Equipped with GPS technology to pinpoint atmospheric conditions by location, the dropsondes have led to an average 10–20% improvement in track forecasts for the critical 48-hour window in which hurricane watches and warnings are issued, according to the NHC. Those warnings are estimated to save an average of about 200 lives yearly.

“The GPS dropsonde has become an integral part of NHC’s operations and an essential part of the forecaster's toolkit,” says James Franklin, chief of the center’s Hurricane Specialist Unit.

Into the storm, far from humans

These dropsondes are now poised to deliver even more information. For the next three years, scientists at a command center within NASA’s Wallops Flight Facility in Virginia will guide a remotely piloted NASA Global Hawk aircraft above hurricanes and, with only a few clicks of a mouse, send dropsondes into the storms. The effort is part of a NASA research and forecasting project called Hurricane and Severe Storm Sentinel (HS3).

The Global Hawk can release more dropsondes than any other aircraft in the world—as many as 88 from a single flight—thanks to a new automated deployment system and a newly miniaturized version of the instrument package itself, both developed at NCAR. These advances should lead to better analyses of the moisture transported in winter storms and the wind speeds in hurricanes just above the ocean surface, factors that are critical for understanding the evolution and impact of these weather hazards. 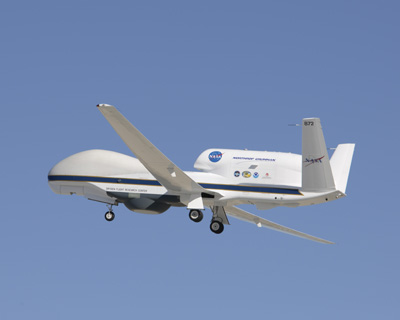 Watch a video clip showing the automated launcher deploying dropsondes from within an NCAR lab and from the Global Hawk in flight.

Since NCAR developed the first dropsonde in the 1970s, its engineers have refined and improved the technology in collaboration with scientists from universities, federal agencies, and many foreign countries, as well as the industry partners who manufacture the sondes and related hardware. In turn, dropsonde data have helped lead to widespread gains in our understanding of the atmosphere and our ability to predict it.

“Each time we introduce a new generation of dropsondes, we get a clearer picture of the atmosphere in places that are hard to reach,” says Terry Hock, who manages the dropsonde program at NCAR. “The new results help our science provide even more benefit to society.” 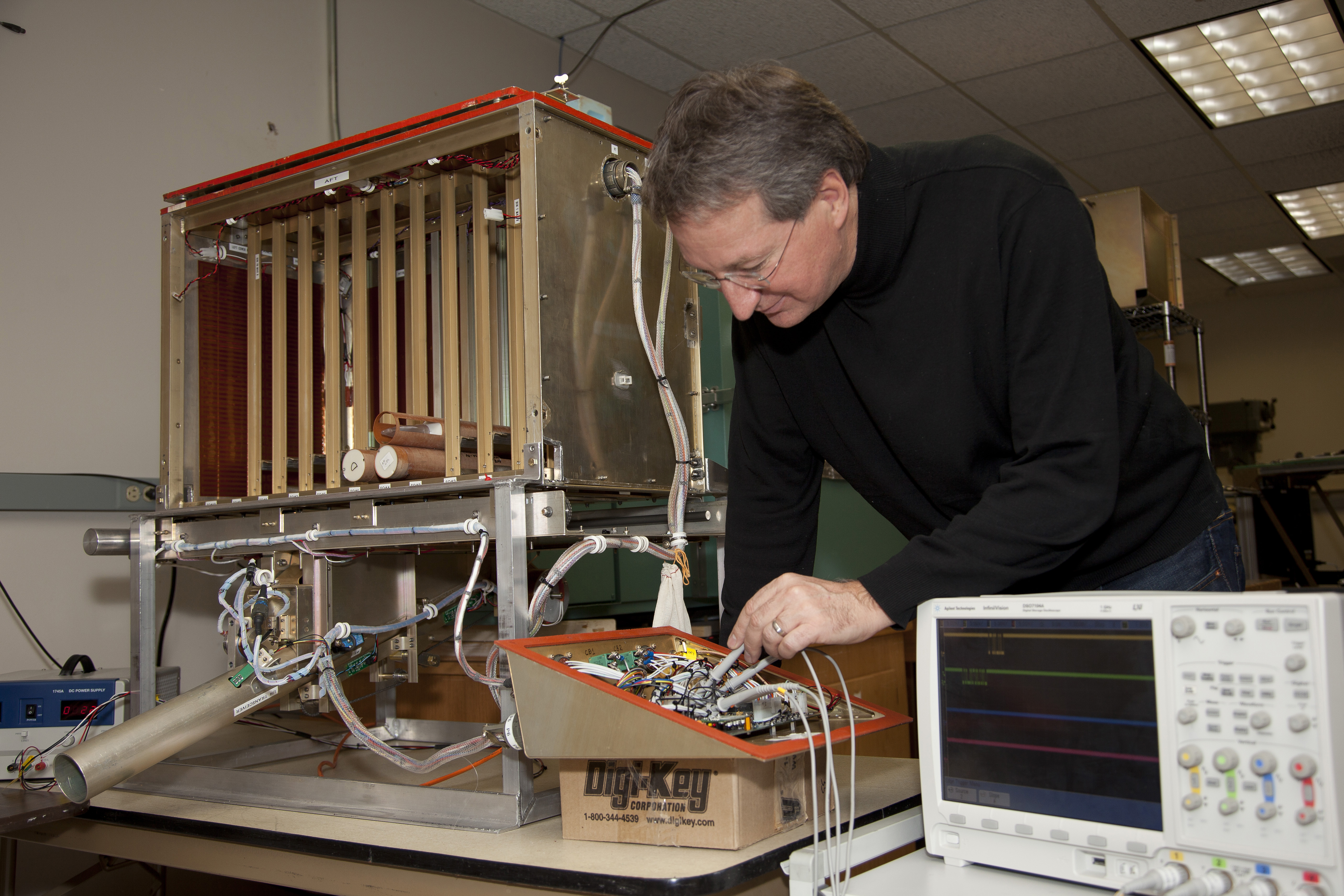 While dropsondes are often associated with hurricanes, they are used under a variety of atmospheric conditions around the world. The cylindrical weather reconnaissance devices, each about a foot (0.3 meters) long, are dropped from an aircraft or balloon at altitudes of up to 12 miles (19 kilometers) or more. As they descend by parachute, they sample the atmosphere four times a second, or about every eight vertical feet. The measurements are radioed back to the aircraft or balloon in real time, then relayed to the ground, where they are used in weather forecast models around the world.

NCAR’s GPS dropsonde system (the latest version is known as AVAPS-II, or Airborne Vertical Atmospheric Profiling System) is the only one in the world considered capable of providing research-quality, high-resolution profiles in hard-to-reach locations around the globe. More than two dozen aircraft based in Canada, Germany, Japan, Taiwan, the United Kingdom, and the United States—including research aircraft operated by NSF, NOAA, and NASA—are equipped to deploy the sondes.

In a 2007 report, the National Research Council hailed the development of the GPS dropsonde as one of the most important research outcomes of NSF support for atmospheric research over the past several decades.

“In terms of bang-for-the-buck, the NCAR GPS dropsonde program has been a stunning success,” says Kerry Emanuel (Massachusetts Institute of Technology). “A great deal of what we have learned about hurricanes in the last few decades has come from measurement using the GPS sondes.”

NCAR’s recent upgrade of the dropsonde system was triggered by the evolution of the electronics used in the sondes. “Without a redesign, it would soon have become impossible to manufacture dropsondes,” says Hock. NOAA shared the costs to develop the next-generation system, AVAPS-II. Both the instrument package and the aircraft data system got a boost from an enhanced version of the integrated hardware, electronics, and software originally developed in the 1990s. 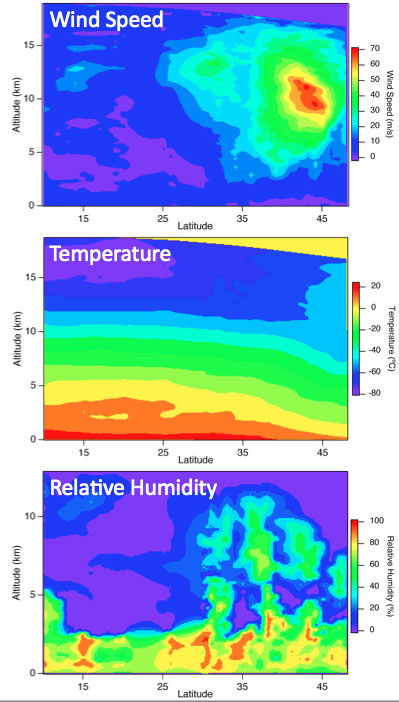 During a 2011 test flight for the Hurricane and Severe Storm Sentinel (HS3) project over the Pacific Ocean, data from the dropsonde system aboard NASA’s Global Hawk were used to construct a cross section of the atmosphere along the longitude of Hawaii from 10°N to 50°N. The images above reveal the structure of the winds, temperature, and relative humidity as the aircraft crossed over a “river” of high moisture in the atmosphere and an associated frontal zone and jet stream. (Illustration courtesy NOAA.)

About 4,000 AVAPS–II dropsondes are made each year by Vaisala, which has a manufacturing license for the NCAR design. NCAR provides engineering support for the manufacturing, as well as extra assistance when modifications or complex troubleshooting are needed.

Twice as fast as its predecessor, the AVAPS-II dropsonde gathers and transmits data four times a second. At a typical fall speed of about 23 miles per hour (or 10 meters per second, both as measured at the surface), that means the atmosphere is sampled every 8 vertical feet (2.5 m) instead of every 16 feet.

Building on the AVAPS-II design with an eye toward NASA’s Global Hawk aircraft, NCAR engineers designed a remotely controlled launch system (see below) and a miniaturized version of the AVAPS-II dropsonde.  The bronze-colored, cotton-based cylinder that houses the instruments is about 25% shorter (now about a foot long) and about 50% lighter (now weighing in at less than six ounces). Each of the smaller sondes costs about 20% less to produce than its predecessor.

The miniaturized dropsondes and the new remote launch system saw their first large-scale use on the NASA Global Hawk in the NOAA-organized WISPAR study (Winter Storms and Pacific Atmospheric Rivers), which took place over the North Pacific in February and March 2011. Storms across this sparsely sampled region often move east to affect the United States, so any supplemental data can be a major boon to U.S. forecasts. During three WISPAR flights, the Global Hawk deployed a total of 177 dropsondes, including a record-setting 70 sondes in a single flight.

The aircraft also sailed above the North Pacific last fall on test flights for NASA's HS3 project. The full-scale HS3 hurricane sampling in the North Atlantic will extend from mid-August to mid-September during 2012–2014. About ten flights are expected per season, divided between two Global Hawks, one of which will carry the automated dropsonde system.

“It’s a huge leap forward and very valuable to us,” says NOAA principal investigator Gary Wick of the new dropsondes. 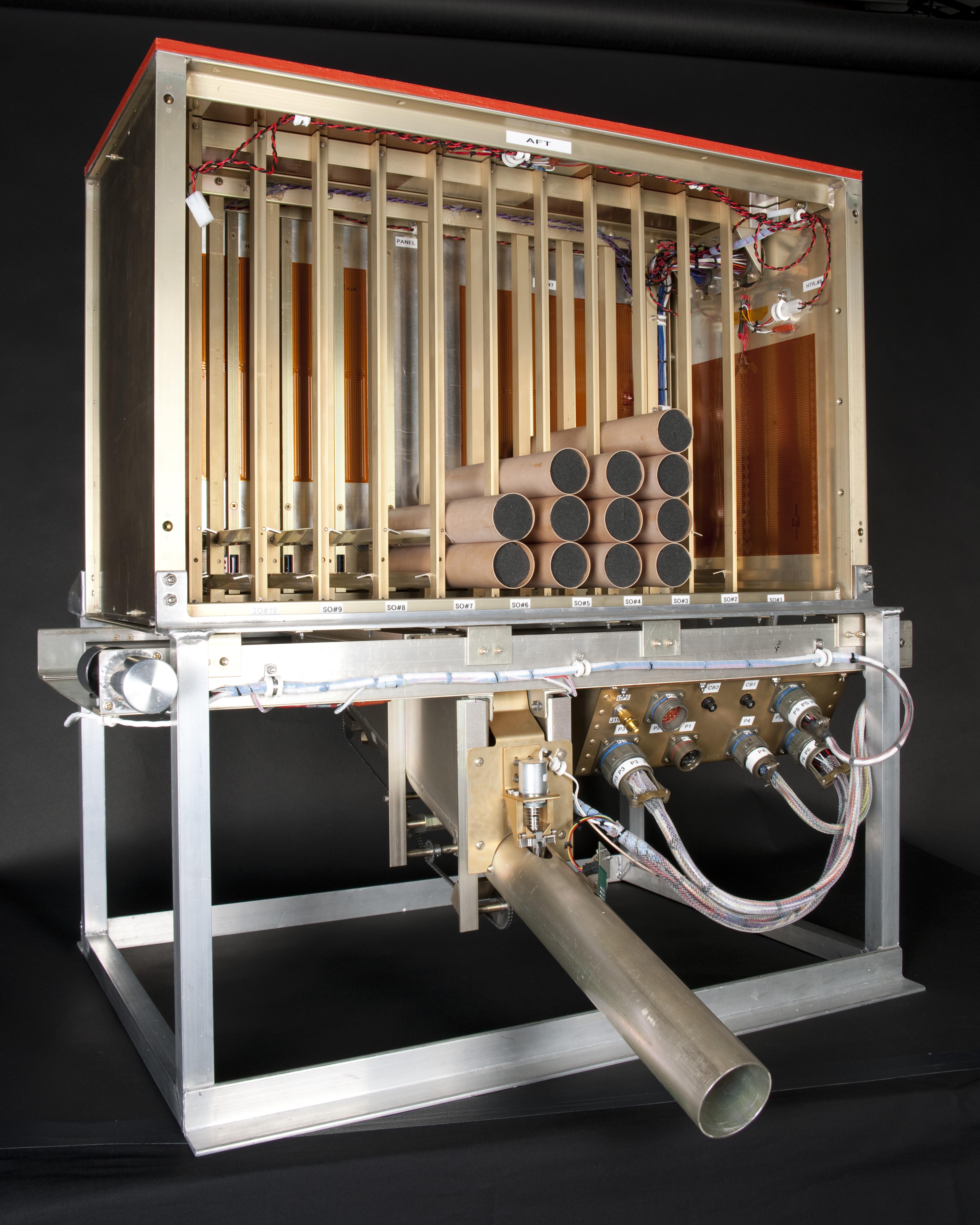 This automated dropsonde deployment system, developed for NOAA by the National Center for Atmospheric Research, was installed on NASA’s Global Hawk. The dropsondes (cylinders stacked in columns at center) are ejected from the aircraft through the tube at bottom after remotely issued commands. The aircraft can accommodate up to 88 dropsondes per flight. (NASA photo by Tony Landis.)

The high sampling rate of the sondes hasn’t yet been fully leveraged, according to Wick, but he says it has the potential to provide improved analyses of the moisture transport within winter storms and the wind speeds in hurricanes just above the ocean surface. Eventually, the technology could also enhance short-term weather prediction, although to make that possible, aircraft will need high-speed communication links—such as the Ku-band system recently put in place on the Global Hawk—so that the data can be quickly shuttled to operational forecast centers.

At first glance, the automated dropsonde launcher resembles a soft-drink machine (see photo), with instrumented cylinders stacked atop each other in a series of side-by-side columns. After a series of launch commands, a dropsonde is ejected from one of the columns. Its parachute (also designed at NCAR) deploys a few seconds after the sonde tumbles out of the aircraft.

Getting the launch device into the compact Global Hawk was one of the many tasks facing NCAR’s Cynthia Bradley, who’s been overseeing development of the launcher for the last three years. The launcher, about three feet (one meter) square, is almost twice as wide as the door in the belly of the Global Hawk. Bradley solved the problem by designing a three-piece modular system that could be fully assembled once inside the aircraft. “It was almost like building a ship in a bottle,” she says. 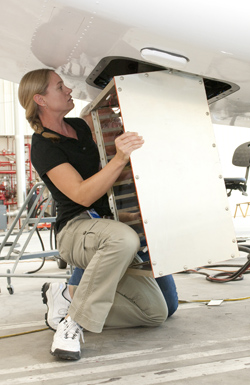 Because the launcher sits within a part of the Global Hawk that isn’t environmentally controlled, it faces a huge variety of weather conditions. “It could be sitting on the tarmac in the Mojave Desert or flying at 60,000 feet in the tropics,” says Bradley. As a result, she notes, parts of the system had to be either carefully chosen or custom built: “A lot of off-the-shelf components are not rated to those extreme temperatures.”

Beyond hurricanes and winter storms, there are other challenging conditions where remotely piloted planes could safely put dropsondes to work. Scientists at the U.K.’s Facility for Airborne Atmospheric Measurements are interested in using robotic aircraft to sample the atmosphere in and near volcanoes to better analyze the chemistry and motion of volcanic emissions. Such data could help reduce the massive rerouting of air travel that’s often carried out as a safety measure after major volcanic activity, as was the case in 2010 after the eruption of Iceland’s Eyafjallajokull volcano.

Dropsondes have also been remotely launched from free-floating stratospheric balloons dubbed “driftsondes.” Three major field projects over the last few years in Africa, Hawaii, and Antarctica have used a driftsonde system developed by NCAR and French engineers and scientists. A total of 673 dropsondes descended from a fleet of stratospheric balloons that encircled Antarctica for Concordiasi, a project carried out by the Observing System Research and Predictability Experiment (THORPEX) for the International Polar Year.

On to bigger aircraft

Even when there’s a human pilot on board, automating the dropsonde process can still deliver benefits. Currently, dropsondes are launched from what was designed as the baggage section of the NSF/NCAR Gulfstream V aircraft.  “It’s very labor intensive,” says NCAR’s Terry Hock. Because of restrictions on entering the baggage area, dropsondes can’t be launched more than four times an hour when the G-V is above 40,000 feet. “With an automated system, if we wanted to shoot a whole curtain of sondes, one every minute, we could do that,” Hock says.

Right now, Bradley and colleagues are tailoring a version of the automated launcher for use on the G-V. “It’s a matter of fine-tuning it,” she says. “This time we’ll be in a pressurized, temperature-controlled part of the aircraft, and there’s the capability for someone to physically look at the system.” The device itself will only hold about half as many sondes on the G-V as on the Global Hawk, but it can be manually reloaded during flight, and the G-V’s flights aren’t as long as the Global Hawk’s, which can range up to 30 hours. If all goes well, automated launches will begin on the G-V in 2013.

Hock and his NCAR colleagues are looking forward to the science the new dropsondes will make possible as well as the pure satisfaction of seeing their creations in the air. Ultimately, he says, “Our goal is not to build a really cool dropsonde. It’s to provide a really high-quality data set for scientists.”