Derecho in DC: Science and surprise

Behind the storms that socked the mid-Atlantic

Bob Henson | July 2, 2012 • With a ferocity to match the record heat it displaced, a thunderstorm complex raced from Illinois to the Delaware coast in a mere 12 hours on Friday evening, June 29. It knocked down countless trees and power lines, with wind gusts topping 80 miles per hour in many spots. It threw millions of people into turmoil, with air conditioners, computers, and phones out for days. And it brought to light a weather word du jour with an obscure but intriguing history. 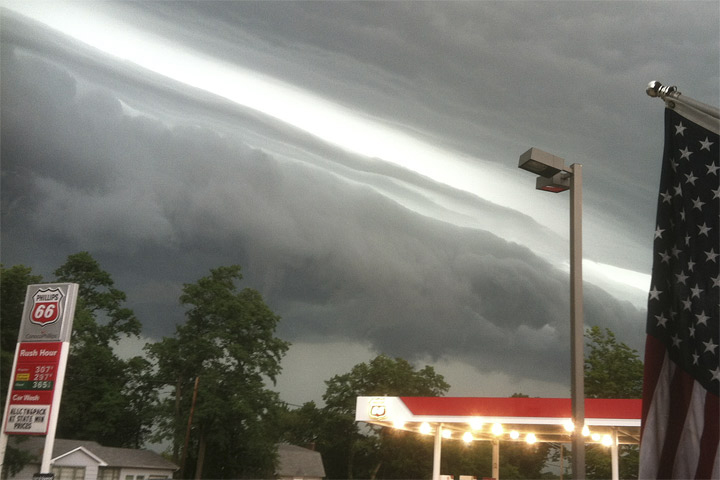 A shelf cloud, forced upward by strong winds behind it, marks the front edge of the destructive derecho that moved from Illinois to the Atlantic Ocean on June 29, 2012. (Photo from NASA Earth Observatory, courtesy Kevin Gould and NOAA.)

This storm complex was a derecho (pronounced deh-REY-cho). It’s a phenomenon too infrequent to be familiar, but too dangerous to be ignored. A derecho is akin to the gust fronts we commonly experience when a thunderstorm arrives, except it plays out in far more spectacular fashion.

While the high winds of a tornado or hurricane spin around powerful, circular updrafts, a derecho’s wind consists of rain-cooled air that descends and plows into very warm, unstable air. Most such downbursts only span a few miles and last a few minutes, but sometimes the atmosphere is primed for this process to intensify in a repetitive fashion. In that case, the winds generate new thunderstorm updrafts as they push forward, and in turn, this creates more rain-fueled downdrafts. If there’s a brisk jet stream adding momentum to the successive downdrafts, then a derecho can race forward at interstate speeds along a track that’s almost bullet-straight, often traversing several states in a single day or night. 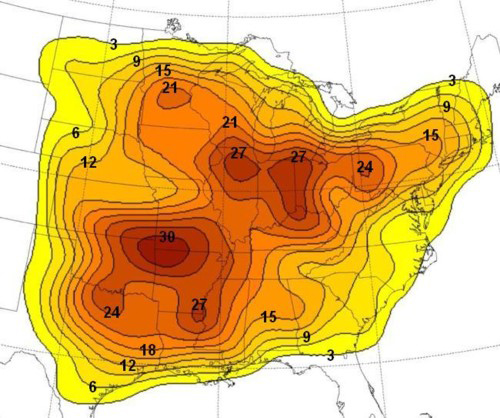 This map shows the number of moderate to strong derechoes experienced at points in the central and eastern United States between 1980 and 2001. (Image courtesy NOAA Storm Prediction Center.)

Most parts of the United States east of the Rockies experience a derecho about every year or two. They’re typically strongest and most common in two areas: the Corn Belt of the Midwest (where the June 29 event began) and the Ozark Mountain region, centered on southwest Missouri and northwest Arkansas.

Derechos favor the months of May, June, and July, when rain-cooled downdrafts can slam into extremely warm, moist air. That was certainly the case this time, as much of the Ohio Valley and mid-Atlantic were experiencing one of the hottest early-summer days in their weather history. The derecho lashed the Washington area just hours after Reagan National Airport hit 104°F, which was two degrees above the city’s previous June record. 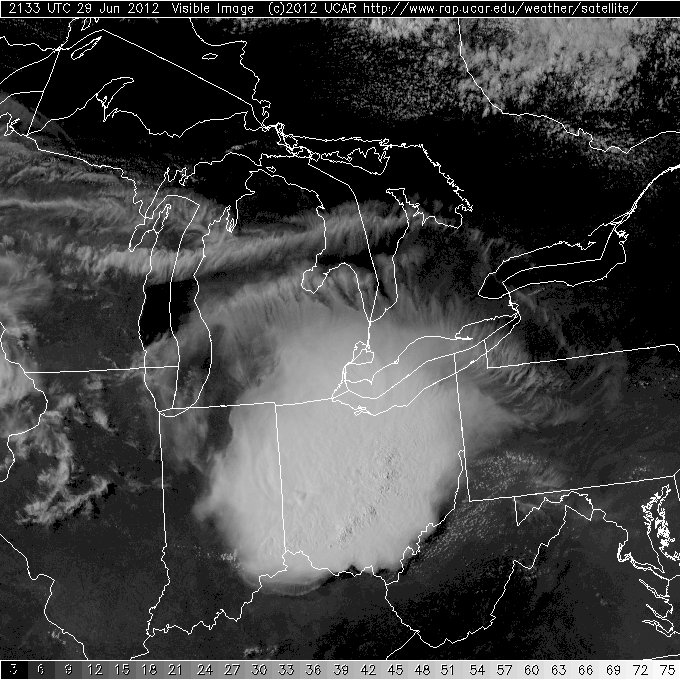 This satellite image, taken around 5:30 p.m. EDT on June 29, 2012, shows the derecho as it moved across Ohio, where some locations received wind gusts of hurricane force. The tufted clouds visible along the north (top) edge of the system suggest the presence of turbulence at flight altitudes. NCAR’s Stanley Trier, Bob Sharman, and colleagues have studied the way in which several different kinds of large storm complexes produce these turbulent zones. (NOAA satellite image courtesy RAL Real-time Weather Data.)

While they don’t hold a candle to the worst tornadoes, derechos can easily inflict damage comparable to an EF1 twister on the enhanced Fujita scale, and their havoc is wreaked over a much larger area. In many parts of the central or eastern U.S., a wind gust of 100 mph (161 kph) is more likely to come from a derecho than a tornado. Virginia governor Bob McDonnell said the June 29 damage was his state’s most extensive for any single weather event outside of a hurricane.

New life for an old name

The derecho’s name helps illuminate the meteorology behind it.  In Spanish, derecho has several meanings, including “straight.” The word was plucked by Iowa scientist Gustavo Hinrichs in 1883 to describe a type of thunderstorm-related wind he dubbed “the straight blow of the prairies.”  He may well have intended a direct contrast to tornadoes, whose Spanish root tornar means “to turn.”

Hinrichs discussed derechos in an 1888 article for the now-defunct American Meteorological Journal, accurately describing several aspects of the phenomenon based on an Iowa example. But after shifts in U.S. meteorology put a damper on severe weather research, the term languished in the meteorological dustbin for nearly a century, until it was revived in a 1987 paper by Robert Johns and William Hirt. (Here’s an essay (PDF) by Johns on the origin and use of the term.) After that, the term quickly caught on among meteorologists, although it’s only now entering more general use—a trend that might accelerate with coverage of the June 29 event.

Over the mountains and into the city

By modern forecasting standards, the derecho in D.C. came as a relative surprise. Residents did get several hours of notice that wild weather was possible, thanks to a severe thunderstorm watch. And the arrival of the derecho itself was well warned. But less than 24 hours earlier, it wasn’t obvious that such a destructive event was in the cards for the Washington area. 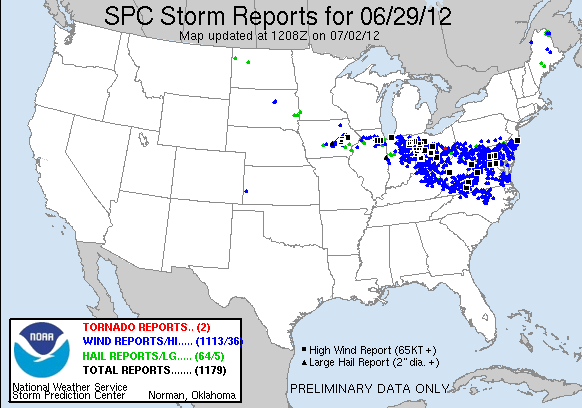 On Friday morning, the New York Times’ national forecast called for thunderstorms from South Dakota and Nebraska to Maine and Massachusetts, with most producing little rain; the mid-Atlantic outlook focused on the heat risk. At NOAA’s Storm Prediction Center (SPC), the initial severe weather outlook for June 29, issued around 2 a.m. EDT, did not include Maryland or Virginia in its primary risk area for the day, and the odds of high wind in those states were pegged at less than 5%.

By morning, though, the signals were starting to come together in data from radiosondes (weather balloons) and forecasts from weather models, which increasingly pointed toward a storm complex moving from the Midwest toward the Appalachians. Derechos seldom cross the Appalachians intact, which keeps D.C.-area forecasters cautious about forecasting such a leap. Indeed, a storm complex that produced 80 to 90 mph winds in Chicago on Sunday, 1 July, fizzled en route. But on June 29, the extreme warmth and depth of the air mass, plus energy from the jet stream, kept the derecho powerful all the way to the Atlantic Ocean. 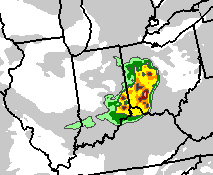 Model runs from the advanced research version of the Weather Research and Forecasting model (ARW-WRF) issued on the morning of June 29 outlined the derecho's path and suggested its strength. This nine-hour forecast, valid at 5:00 p.m. EDT on June 29, shows a large area of maximum wind for the 4:00-5:00 p.m. period exceeding 20 meters per second (45 mph) in southwest Ohio (yellow area), with a pocket of winds stronger than 35 m/s (78 mph). Click here to see legend and details for a broader section of the United States. (ARW image courtesy WRF.)  [Image and caption updated 1:00 PM Tues. 7/3/12]

By 2:30 p.m. EDT, the fast-moving storms had already produced a 91-mph (147-kph) wind gust in Indiana. SPC raised the risk of damaging winds in the D.C. area and noted that “the system may continue to the coast.”

Over the last few weeks, NCAR’s advanced research version of the Weather Research and Forecasting model (dubbed ARW) has been producing detailed forecasts twice daily, in part to support a study of thunderstorms and air chemistry in Colorado, Oklahoma, and Arizona called DC3. These forecasts track the atmosphere at horizontal points separated by only 3 kilometers (1.9 miles), which is a sharp enough resolution to capture many aspects of a given day’s thunderstorm action.

The ARW outlook produced with data from 8:00 a.m. EDT captured the genesis of the derecho across Illinois and its rampage toward D.C. later that day. The model indicated a few pockets of surface wind of at least 35 meters per second (78 mph) along the derecho's path. (See map at left.)

Given its toll of damage and disruption—possibly the largest from a derecho in U.S. history—it’s tempting to call this event a super derecho. In fact, a group of scientists did just that for another powerful storm not long ago.

Clark Evans, a former NCAR postdoctoral researcher now at the University of Wisconsin–Milwaukee, teamed with Morris Weisman (NCAR) and Lance Bosart (University at Albany, State University of New York) to study a stupendous event from May 8, 2009, that they dubbed a “super derecho.” The storm complex moved from Kansas to Kentucky, spinning off tornadoes and developing a vortex that resembled a hurricane’s warm central core. Weisman and Evans analyzed the derecho in companion talks at a 2010 meeting of the American Meteorological Society, and the team now has a paper in the works on the event and how it was depicted by the ARW model. Some aspects were predicted 24 hours in advance. 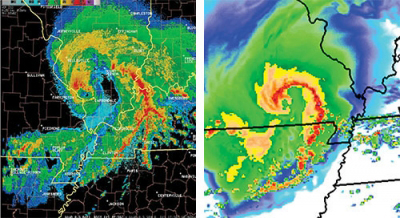 The radar image on the left, taken at 11:56 a.m. on May 8, 2009, shows the super derecho’s bow-shaped structure, with a tropical-storm–like eye in the center of the comma head visible in light blue surrounded by heavier echoes. (Image courtesy NOAA/NWS.) The 27-hour WRF model forecast of the event, shown on the right, accurately predicts this rare reflectivity configuration, although the forecast system occurs somewhat southwest and two hours earlier than the observed system. (Image courtesy Morris Weisman, NCAR.)

How similar were the 2009 and 2012 derechos? While the 2009 event showed up in models a full day ahead, the details of the 2012 derecho didn’t begin crystallizing until a few hours before it formed. There were a number of other differences as well, including the time of day (nighttime vs. daytime), geographic location (central Plains vs. Ohio Valley and mid-Atlantic), tornadic activity (there was little to none with the 2012 event), and the presence of an intense vortex with the 2009 derecho.

“Though they both were high-end events responsible for significant damage and are part of the same archetype of meteorological phenomena, the two cases had many aspects that were quite different,” says Evans.