Hurricane storm surge: in a category of its own

How misinterpretations of hurricane strength can put lives at risk

Bob Henson • September 4, 2012 | As hurricanes go, Isaac wasn’t the easiest to predict. Fortunately, the residents of the central Gulf Coast got ample notice of the storm’s arrival this week, and the death toll was remarkably low given the major storm surge (the push of ocean water up rivers and into coastlines that causes most hurricane deaths). Yet with Isaac rated as a Category 1 on the Saffir-Simpson scale, some media and local officials characterized the flooding as unexpected—which points to a disconnect between public safety messages and their interpretations by the public. 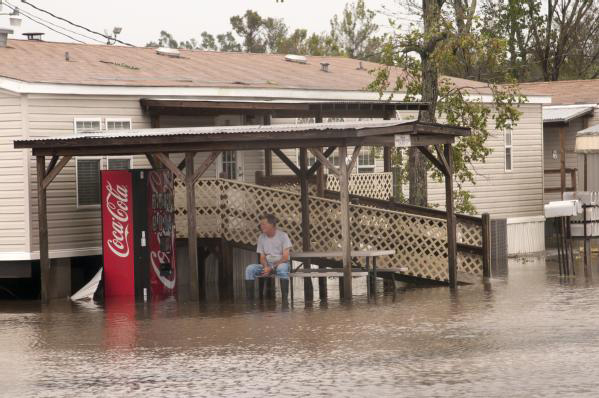 Pointe a la Hache was among the communities in far southeast Louisiana affected by storm-surge flooding due to Hurricane Isaac. (Photo by Patsy Lynch, courtesy FEMA Photo Gallery.)

Perhaps the high water was a surprise to some residents, but the overall risk was clear. Although the storm’s track and intensity were still uncertain on Saturday, August 25, three days before landfall, the picture sharpened on Sunday. At 4:00 p.m. CDT—while Isaac was still a tropical storm—the National Hurricane Center issued a hurricane warning that called for a potential 6 to 12 feet of storm surge from Morgan City, Louisiana, to Destin, Florida, including the New Orleans area. That outlook held firm until Isaac made landfall at 6:45 p.m. CDT on Tuesday, August 28, near the mouth of the Mississippi.

In any hurricane, the actual surge varies widely from point to point, depending on the geometry of the coastline and many other factors. For Isaac, most of the initial surge reports from Louisiana and Mississippi were squarely in the forecast range, according to Jamie Rhome, who leads the storm surge prediction team at NOAA’s National Hurricane Center (NHC).

“We try to come up with a good message and we don’t move from it until it’s absolutely certain that a change is the best course of action,” says Rhome. 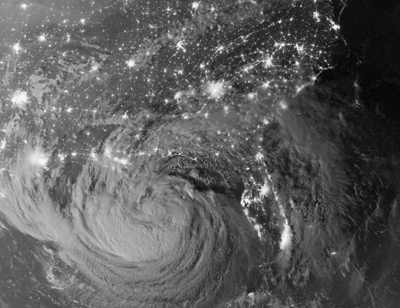 Given the solid forecasts, why did the high water take so many people aback? That question moves the debate from physical to social science. For one thing, it’s clear that many people expect hurricane surge to be roughly proportional to Saffir-Simpson rating.

“I think people focus on the Saffir-Simpson scale and don’t always get the message about other aspects of the storm as it gets closer,” says Rebecca Morss, one of several NCAR researchers working on hurricane warning issues (more on that below).

As implied by its full name, the Saffir-Simpson Hurricane Wind Scale describes only the highest sustained winds, which are fairly straightforward to measure. Storm surge, in contrast, depends on many other facets of coastlines and storms, including how large an area a given storm covers.

“People totally underestimate the role of size in storm surge,” says Rhome. The winds of a large hurricane can pile up much more water across a broader area. And if the storm hits a coastline whose geometry is prone to surge, then the water can be concentrated in dangerous ways, as was the case with 2008’s Hurricane Ike. Though only a Category 2 at landfall, Ike delivered a well-warned surge of up to 12 feet, which came close to overtopping the famed seawall along Galveston Island. Behind that wall, despite mandatory evacuation orders, more than 10,000 people were in harm’s way. 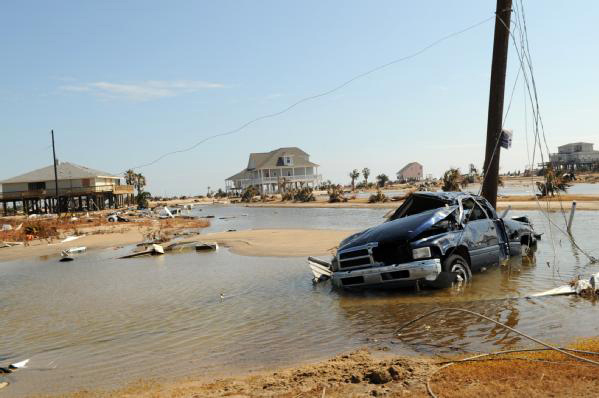 “Ike was the storm that broke the camel’s back,” says Rhome. For many years, the Saffir-Simpson scale had included a range of expected surge for each category, which may help explain why winds and surge are so often linked in the public mind. But the aftermath of Ike prompted the NHC to specifically remove surge from the scale (as an NHC team explained in this PDF). The storm also helped trigger a multiyear evaluation of storm surge products and communications.

Several groups at NCAR—including the discipline-crossing Integrated Science Program, the Climate Science and Applications Program, the Mesoscale and Microscale Meteorology Division, and the Collaborative Program on the Societal Impacts and Economic Benefits of Weather Information (SIP)—have been carrying out research on hurricane warnings. With funding from NSF, NOAA, and the National Ocean Service, NCAR scientists have closely examined how hurricane warning messages are constructed, disseminated, and interpreted. Some of their work is part of NOAA's 10-year Hurricane Forecast Improvement Project (HFIP).

In 2010, Morss and NCAR colleague Mary Hayden published a paper in the journal Weather, Climate and Society examining how people responded during Hurricane Ike to official statements that people in certain areas would experience “certain death” if they did not evacuate. While most interviewees paid close attention to Ike as it approached and were aware that the storm was potentially dangerous, the extent of flooding surprised interviewees. The “certain death” statement (used by the National Weather Service for especially dangerous surges) motivated some recipients while alienating others. 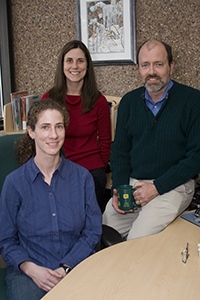 NCAR scientists have now turned to the front end of the process. They’ve interviewed forecasters, emergency managers, and television/radio broadcasters to find out how they create and convey emergency hurricane information. A paper by NCAR's Julie Demuth and colleagues in the August issue of the Bulletin of the American Meteorological Society recommends that these communication partners—collectively dubbed the “hurricane warning system”—work to understand each other’s needs and constraints and carry out more concerted design and testing of specific messages with their intended audiences.

SIP director Jeff Lazo is working with Betty Morrow (SocResearch Miami) on an upcoming study that zeroes in on the kind of forecast details that emergency managers would like to receive on storm surge.

According to Lazo, it appears that a large part of the public doesn’t grasp their vulnerability to storm surge. The team’s early findings also suggest broad support among emergency managers, broadcast meteorologists, and the vulnerable public for storm surge information that’s separate from hurricane watches and warnings. “There are a lot of issues to be resolved about how to do this best and what products and services would meet the desired needs,” notes Lazo.

The NHC now oversees a three-tiered approach to storm surge predictions, keyed to the time frame at hand. In addition, National Weather Service offices issue statements that summarize anticipated storm-surge impacts on a local level, and evacuation orders are issued by local and state officials in coordination with local NWS offices. But the local orders are independent from NHC advisories, sometimes issued on fairly short time frames, and subject to their own politics. 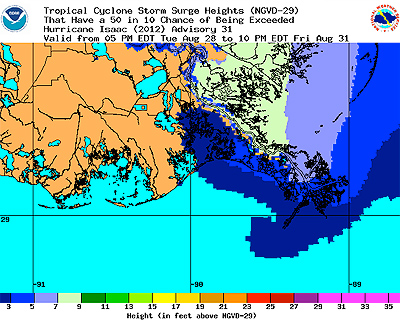 Probabilistic maps of storm surge likelihood were issued every six hours during Isaac's approach by the NOAA/NWS Meteorological Development Laboratory. This graphic shows storm surge heights, in feet above normal tide level, which had a 50 percent chance of being exceeded from 5:00 p.m. EDT on Tuesday, August 28, to 10:00 p.m. on Friday, August 31. Similar maps are posted for probabilities ranging from 10 to 90 percent. The graphics are based on an ensemble of runs from the Sea, Lake, and Overland Surge from Hurricanes (SLOSH) model, using official NHC hurricane advisories. (Image courtesy NOAA/NWS Meteorological Development Laboratory.)

“By the time the NHC and NWS storm surge information is filtered through the media and emergency managers, many people have made their preparation and evacuation decisions, and they may have already anchored on what they expect from the storm,” says Morss.

A scale too many?

Another approach to this vexing problem has been to consider a separate numerical ranking for storm surge, a topic of extensive discussion among researchers and forecasters. In the last few years, NOAA’s Atlantic Oceanographic and Meteorological Laboratory has implemented a novel approach (PDF) for analyzing hurricanes, based on integrated kinetic energy (IKE), that assigns separate 0-to-5 ratings to the destructive potential of wind and of surge and waves combined.

“IKE is a wonderful research tool, but probably not the best thing for public evacuation. Think about having to explain integrated kinetic energy to your cousin or uncle,” says Rhome. More generally, he says, “The NHC has deemed that a storm-surge scale would hurt matters more than it would help” (as described in this PDF). Besides, he adds wryly, “We already have a scale for storm surge. It’s called feet.”

In this spirit, NHC is developing a new product: storm surge warnings (see PDF). To be introduced in 2014 or 2015, according to Rhome, these could bridge the gap between current practice and the unique issues related to high water. Storm surge warnings wouldn’t replace hurricane warnings but would supplement them. They would be produced through collaboration between the NHC and local NWS offices, in much the same way that tornado watches are now issued. When a given amount of surge above ground level is expected—perhaps 4 feet, though the criterion is still to be finalized—a storm surge warning would go out for those locations.

“The threshold would be consistent across the board,” says Rhome. “Four feet of water above ground is the same everywhere, from Texas to Maine.”