BOULDER—The National Center for Atmospheric Research (NCAR) has developed a prototype system to help flights avoid major storms as they travel over remote ocean regions. The 8-hour forecasts of potentially dangerous atmospheric conditions are designed for pilots, air traffic controllers, and others involved in transoceanic flights. 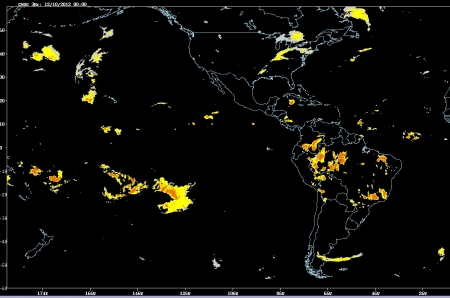 The NCAR-based system, developed with funding from NASA’s Applied Sciences Program, combines satellite data and computer weather models to produce maps of storms over much of the world’s oceans. The system is based on products that NCAR has developed to alert pilots and air traffic controllers about storms and related hazards, such as turbulence and lightning, over the continental United States.

Development of the forecasts was spurred in part by the 2009 crash of Air France Flight 447, which encountered a complex of thunderstorms over the Atlantic Ocean. NCAR worked with the Massachusetts Institute of Technology's Lincoln Laboratory, the Naval Research Laboratory, and the University of Wisconsin-Madison to create the system.

“These new forecasts can help fill an important gap in our aviation system,” says NCAR’s Cathy Kessinger, the lead researcher on the project. “Pilots have had limited information about atmospheric conditions as they fly over the ocean, where conditions can be severe. By providing them with a picture of where significant storms will be during an eight-hour period, the system can contribute to both the safety and comfort of passengers on flights over the ocean.”

The forecasts, which continue to be tested and modified, can be viewed here. They cover most of the Atlantic and Pacific oceans, where NCAR has real-time access to geostationary satellite data. The forecasts are updated every three hours. 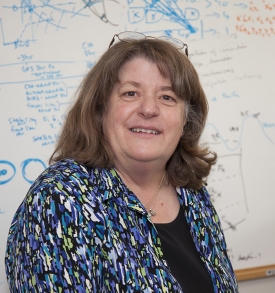 The information, however, is of limited value for strategic flight planning while en route. Pinpointing turbulence associated with storms over the oceans is far more challenging than over land because geostationary satellites, unlike ground-based radar, cannot see within the clouds. Thunderstorms may develop quickly and move rapidly, rendering the briefings and weather updates obsolete. Onboard radars lack the power to see long distances or through dense clouds.

As a result, pilots often must choose between detouring hundreds of miles around potentially stormy areas or flying through a region that may or may not contain intense weather. Storms may be associated with hazardous windshear and icing conditions, in addition to lightning, hail, and potentially severe turbulence.

“Turbulence is the leading cause of injuries in commercial aviation,” says John Haynes, Applied Sciences program manager at NASA Headquarters in Washington. “This prototype system is of crucial importance to pilots and is another demonstration of the practical benefit of NASA's Earth observations.”