1 September 2009  •  Eleven days can go by in no time, but their brevity was accentuated for 27 graduate students at a summer colloquium on 1–12 June. The goal was to give students—most of them new to doctoral programs—a taste of fieldwork by having them organize and conduct mini–field experiments and draw meaningful results from the data. They would use the same tools and techniques used in full-scale campaigns, with support from NSF's Lower Atmospheric Observing Facilities and help from about 70 staff from the colloquium's organizers: the NCAR Advanced Study Program (ASP) and Earth Observing Laboratory (EOL), Colorado State University (CSU), and the University of Wyoming (UW).

"Talk about an accelerated timescale!" says UW's Darren Clabo. He and his peers went through more than 30 science and instrumentation lectures and lab exercises over four days. Then they huddled on a Thursday afternoon to map out observing strategies for Friday and Saturday, 5–6 June. 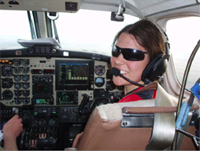 Below: Students caught a glimpse of the University of Wyoming King Air in flight (upper right) as they took flux measurements at NCAR’s Marshall Field Site. (Photo by Wen-Chau Lee.)  Veronique Meunier (above, from McGill University) was one of four students aboard the King Air. (Photo by Larry Oolman.) 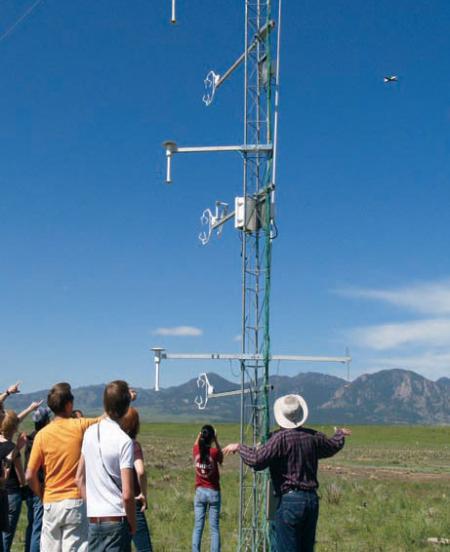 "The students had to decide on ten different objectives in three hours of planning," noted EOL's Wen-Chau Lee, who organized the colloquium with Jorgen Jensen and Steven Oncley (EOL), Al Rodi (UW), and Steve Rutledge (CSU). They suggested a number of possible topics, ranging from gravity waves to surface energy balance and precipitation type. But it was up to the students to choose their goals, keeping the weekend's weather outlook in mind.

The group quickly learned how to change course as needed and deal with atmospheric uncertainty, says Clabo. "I was part of the decision to axe a project to study gravity waves, because we didn't think there would be any. However, on both Friday and Saturday, there were copious gravity waves. Chalk that one up to experience."

Though the atmosphere was suppressed on Friday and fairly dry on Saturday, thunderstorms did materialize, including a tornadic supercell in southeast Wyoming on 5 June (see page 6). On Friday, four students took the King Air on a morning flight that sampled the sharp divisions between surface air and a capping inversion and an afternoon flight that measured cumulus entrainment and precipitation initiation.

The bonus event was on Sunday, when several of the students witnessed a midday tornado east of Boulder from the eleventh floor of a University of Colorado dormitory. "We had extraordinary luck with the weather," says Rodi.

The pace didn't slacken in week two, as students had only three days for data analysis. After another day of preparation, the colloquium closed with a full day of talks that gave each student 15 minutes to present. The research will be written up in a paper for the Bulletin of the American Meteorological Society.

Although graduate students often participate in field work, and several universities have conducted hands-on radar and aircraft training courses, this was perhaps the largest effort to date to entrain students into the full process of conceptualizing and executing a multiplatform field campaign.

"While understanding instruments is important, the focus was on allowing the students to gain a deeper insight into the atmosphere and its processes through practical research projects," Lee says.

"It went extremely well—in fact, much better than I thought it would. I think this reflects on the high quality of the students and the large number of mentors available," says Rodi. The main downside was the ultra-tight schedule: "We covered an immense amount of material. Three weeks might have been justified."

According to Clabo, "The best part of the program was simply meeting the other students. Everyone brought a wealth of experience and knowledge to the table. All of us are on the same educational timescale, and I'll likely be seeing their names and collaborating with these folks for the rest of my professional life. I couldn't be more excited for the future."