The head of NASA's Global Modeling and Assimilation Office (GMAO) knows how challenging it is to predict El Niño. Before joining GMAO in 2003, Michele Rienecker led NASA's Seasonal to Interannual Prediction Project in 1997. She has also overseen adoption of the ensemble Kalman filter and other tools for incorporating satellite altimetry data in ocean circulation models. GMAO's coupled ocean-atmosphere model is a leader in improving predictions of the El Niño/Southern Oscillation (ENSO) by assimilating a wide range of data on ocean conditions and other variables. Back in January, the GMAO's coupled ocean-atmosphere model was months ahead of the pack in predicting this summer's arrival of a new El Niño. 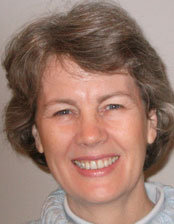 Why is it so difficult to represent ENSO in a computer model?

It's very much a coupled phenomenon, with subtle interactions between the atmosphere and ocean that make a difference in how ENSO evolves. You need a very good representation of the atmospheric boundary layer and the ocean surface layer. These are areas where a lot of model improvement is still needed. In the western Pacific, we've tended to just look at the upper-ocean temperature anomalies and how winds can force those anomalies and respond to them. Now we're learning how salt can mediate that exchange. What's called a barrier layer inhibits the mixing deep down to the thermocline in the western Pacific. It's a very complex environment. ENSO is also very large in scale, so it depends on conditions throughout the Pacific, not just westerly wind bursts driving a subsurface anomaly to the east. We've seen cases where conditions in the eastern Pacific can completely suppress a developing El Niño or La Niña.

What's the status of dynamical forecasts of El Niño and La Niña now versus a few years ago?

For the last big El Niño [1997–98], once the warming was underway, model predictions did very well, including predicting the subsequent cooling. After the 1998 La Niña, there was a change in sign of the Pacific Decadal Oscillation [PDO] in 1999, and a lot of the forecasts—including ours—tended to overpredict warming for a few years afterward. In the past we've tended to initialize the atmosphere by itself and the ocean by itself. When you do that, they tend to be slightly inconsistent and have a tendency to produce "shocks"—which can still happen in our model and others. For the next generation of models, our community will pay a lot more attention to coupling in the initialization. We also have a lot more data for initializing the ocean; the Argo floats give us more information on subsurface salinity, for example. One thing we recognize is that ENSO is not a purely cyclic phenomenon—there are differences in each event, which make them more difficult to predict. We're trying to look at larger-scale processes that affect the predictability of the ENSO system, such as the PDO, as well as the impacts of local wind variations.

Why do you think the GMAO model did so well with the onset of the current El Niño?

Our model tends to be sensitive to the subsurface conditions— it likes to generate anomalies—and our thermocline is quite sharp. Starting in January, the subsurface in the western Pacific tended to be warm, and so our model propagated those anomalies to the east and projected a warm event. However, we've only had one very large El Niño since we started doing forecasting in 1993. In terms of building up confidence in our forecasts, that presents a problem.

Can we get past the spring "predictability barrier" for ENSO forecasts?

Once you get through the July time frame, the forecasts tend to do better, but in March-April-May, it's really tough. The westerly wind bursts, which are important when they have a long duration and long fetch, represent a chaotic input that is difficult to predict. So it's tough for prediction models to get things right. We're now realizing that the information we can get in a month's time is quite important. So instead of doing only one forecast a month, groups are starting to do predictions more frequently throughout the month in order to include the high-frequency information from winds across the Pacific.