BOULDER—Contrary to earlier projections, few developing countries will be able to afford more efficient technologies to reduce greenhouse gas emissions in the next few decades, new research concludes. The study, by researchers at the National Center for Atmospheric Research (NCAR) and the University of Colorado, warns that continuing economic and technological disparities will make it more difficult than anticipated to reduce greenhouse gas emissions, and it underscores the challenges that poorer nations face in trying to adapt to global warming.

The study will be published this month in the journal Climate Research. It was funded by the National Science Foundation, NCAR's sponsor. 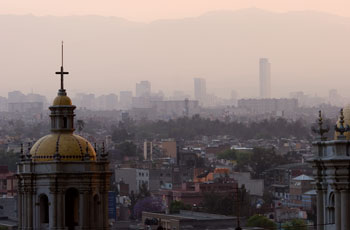 Many developing countries, such as Mexico, are failing to adapt technologies that are substantially more efficient and could result in reduced carbon dioxide emissions. [ENLARGE] (Photo by Carlye Calvin, ©UCAR.) News media terms of use*

"There is simply no evidence that developing countries will somehow become wealthier and be in a position to install more environmentally friendly technologies," says Patricia Romero Lankao, an NCAR sociologist who is the lead author of the study. "We always knew that reducing greenhouse gas emissions was going to be a challenge, but now it looks like we underestimated the magnitude of this problem."

The new research also confirms that even those advanced nations that are turning to more environmentally friendly technologies are worsening the outlook for global warming. Their economic growth is outstripping the increase in efficiency, and the demand for more cars, larger houses, and other goods and services is leading to ever-increasing emissions of carbon dioxide. Many of the products these nations consume come from developing countries that are producing more but not gaining the wealth needed to increase efficiency.

As a result, most industrialized and developing countries are increasing their emissions of carbon dioxide. Overall, global emissions grew at an annual rate of 1.3 percent in the 1990s and 3.3 percent from 2000 to 2006.

The study has implications for international climate change negotiations, such as this week's U.N. Climate Change Conference in Poznan, Poland. The United States and other technologically advanced nations are under pressure to reduce their per capita carbon dioxide emissions, while developing countries are being urged to adopt cleaner technology. The research suggests that both goals will be difficult to achieve.

In addition, if developing countries fail to become significantly more prosperous, they may be unable to protect their residents from some of the more dangerous impacts of climate change, such as sea-level rise and more-frequent droughts.

"Their populations and economic activities will not have the availability of resources, entitlements, social networks, and governance structures deemed particularly important ... for them to adapt to the impacts of climate change," the paper states.

The cost of inefficiency

Even though the developing nations analyzed by the research team generally have smaller economies, they are responsible for about 47 percent of the world's emissions of carbon dioxide, one of the major greenhouse gases.

The reason has to do in part with the inefficient energy and transportation systems in nations with less wealth. Small and outdated industrial facilities that use higher-polluting fossil fuels, for example, tend to emit more carbon dioxide per production unit than a larger facility with newer, cleaner technologies. In addition, developing countries contribute a large amount to carbon dioxide emissions when their forests are logged or burned.

To determine whether developing countries are likely to become significantly more efficient, Romero Lankao and her co-authors divided 72 of the world's more populous countries into three primary groups: technologically advanced nations such as the United States (haves), emerging nations such as Thailand (have-somes), and poorer nations like Tanzania (have-nots). Using World Bank data, they based their classifications on three criteria that can influence carbon dioxide emissions: gross domestic product per capita, urban population, and population in the 15 to 65 age range. They then analyzed the economic trajectories of the selected nations from 1960 to 2006, using several statistical techniques.

The team found that the economic disparity between industrialized countries and most developing ones, as measured by gross domestic product per capita, has increased since 1960 rather than converging. Furthermore, the study projects that, if present trends continue, that disparity will continue to grow for at least the next two decades.

A few have-some nations, such as China, appear poised to move up in the world economy and potentially adopt more efficient technology. But many other have-some and have-not countries that emit a significant percentage of greenhouse gas emissions, such as India and Iran, are failing to amass the resources needed to become substantially more efficient. 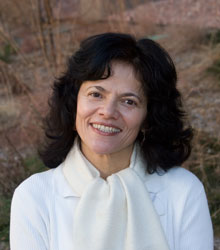 A challenge to IPCC projections: the lack of convergence

These findings cast doubt on some projections by the Intergovernmental Panel on Climate Change. When the IPCC released its comprehensive assessment in 2007, it based several scenarios of future greenhouse gas emissions on the concepts of modernization and convergence, which state that many developing countries would close the economic gap and adopt more efficient technologies.

Romero Lankao and her co-authors, however, found evidence for an alternative view, known as the world economy theory, which holds that nations will remain hierarchical, with poorer nations continuing to be in a peripheral economic position even as they produce more products and resources for wealthy countries. Those nations may adopt more efficient and environmentally friendly means of production over time, but at a significantly slower rate than projected by the IPCC.

The world economy theory suggests significant impacts on future greenhouse gas emissions. For example, if the wealthiest regions were to have seven times the average income of the poorest regions in 2100, as projected in some IPCC scenarios, the world would pump 14.2 gigatons of carbon dioxide into the air that year. But if the income disparity reached 16 times, then carbon dioxide emissions would be about 9 percent higher, at 15.5 gigatons — a difference that, over time, would lead to substantially higher global temperatures.