Great World Wide Star Count: Light pollution to be mapped by thousands of citizen scientists around the world this month

BOULDER—Schoolchildren, families, and citizen scientists around the world will gaze skyward after dark from October 20 to November 3, looking for specific constellations and then sharing their observations through the Internet. The Great World Wide Star Count, now in its second year, helps scientists map light pollution globally while educating participants about the stars.

The event, which is free and open to everyone who wants to participate, is organized by the Windows to the Universe project at the University Corporation for Atmospheric Research (UCAR), in conjunction with planetariums and scientific societies across the country and abroad. Funding is provided by the National Science Foundation.

"The star count brings families together to enjoy the night sky and become involved in science," says Dennis Ward of UCAR's Office of Education and Outreach. "It also raises awareness about the impact of artificial lighting on our ability to see the stars." 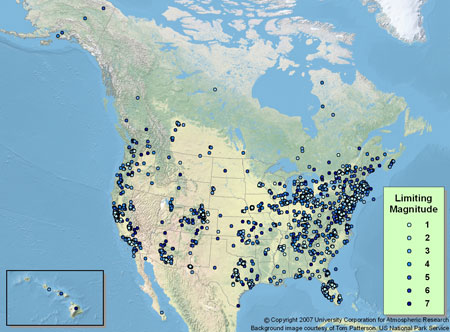 The 2007 star count drew 6,624 observations taken on all seven continents, and organizers expect the number of participants to double this year. UCAR used last year's observations to generate maps of star visibility across the United States and around the world. The results show a strong correlation between development and a lack of night sky visibility.

Next year, the star count will be included in a cornerstone project of the 2009 International Year of Astronomy, a global effort initiated by the International Astronomical Union and the U.N. Educational, Scientific, and Cultural Organization to promote interest in astronomy.

How the count works

Participants in the Northern Hemisphere will look for the constellation Cygnus, while those in the Southern Hemisphere will look for Sagittarius. They will then match their observations with magnitude charts downloaded from the Great World Wide Star Count Web site (see below). The site contains instructions for finding the constellations and other event details, and it links to background about astronomy on the Windows to the Universe Web site.

Participants may make observations outside their homes or go to less developed areas where more stars are visible. Those in overcast areas who cannot see stars will be able to input data about cloud conditions instead.

Bright outdoor lighting at night is a growing problem for astronomical observing programs around the world. By searching for the same constellations in their respective hemispheres, participants in the Great World Wide Star Count will be able to compare their observations with what others see, giving them a sense of how star visibility varies from place to place. The observers will also learn more about the economic and geographic factors that control light pollution in their communities and around the world.

"Last year's results showed a strong correlation between dense development, where there is a lot of light, and a lack of star visibility," Ward says. "Without even being aware of it, many of us have lost the ability to see many stars at night. Part of our goal is getting people to look up and regain an appreciation of the night sky."