The cool summer that wasn't

Bob Henson, UCAR Communications | 21 September 2009  •  If you’re a gardener in New England, you might remember the wet, cool summer of 2009 for its tomatoes and potatoes, ravaged by the earliest and most widespread “late blight” on record. If you’re from south Texas, you were probably just trying to keep green things alive in heat and drought on par with the Dust Bowl’s worst.

Such were the contrasts of the season across the United States. Rumor has it that it was a cool, damp summer—and indeed it was, if you happened to live in the populous Midwest and Northeast. It was the coolest July on record in five states: Ohio, Illinois, Indiana, Pennsylvania, and West Virginia.  For the country as a whole, meteorological summer (June through August) came in as the 30th coolest in the last 115 years.

Some folks took the mild summer in the central and northeast U.S. as a sign that global climate change has been overblown. But, when you step back and look at the June-through-August period for Earth as a whole, central North America stands out as one of the few areas where temperatures were below average. In the graphic below from NOAA’s National Climatic Data Center, most other parts of the globe are swathed in above-average red, with places like Winnipeg and Chicago enveloped in a small oasis of below-average blue. 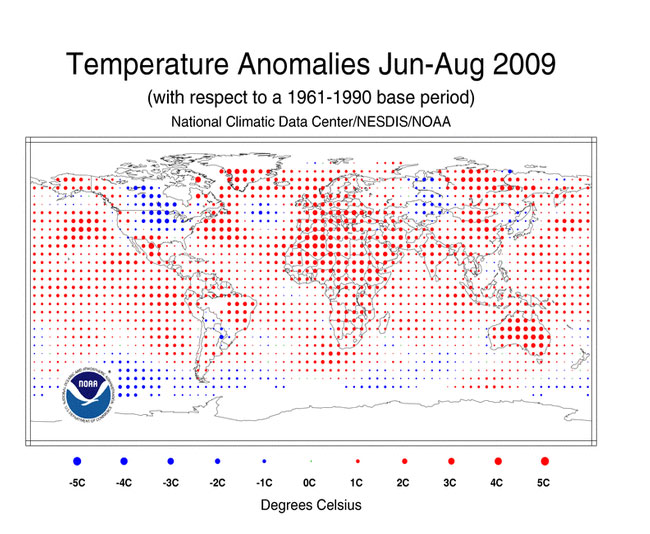 Worldwide, it was the third-warmest June/July/August on record, and the warmest ever observed for the world’s oceans, according to NCDC. Let's look at some of the numbers, which I'll give in the temperature scale in which they were reported, followed by a conversion to the other scale (Fahrenheit or Celsius).

The frequent lake breezes that kept Chicago air-conditioned this summer, and the delightful absence of hazy heat in New York’s Central Park, where it never topped 92°F (33.3°C), sounded pleasant enough. Yet the records being set on the other side of the country were not only more impressive but more dangerous.  In July, at least three major cities—Austin, San Antonio, and Phoenix—had their hottest single months ever recorded. So did Death Valley, California, where 22 days reached or topped 120°F (48.9°C). And Seattle smashed its all-time daily heat record, hitting 103°F (39.5°C), an event extensively chronicled by University of Washington professor Cliff Mass in his weather blog.

Australia was unusually hot too—especially noteworthy given that it was still winter on that side of the globe.  As noted by the Bureau of Meteorology, August was the most anomalously warm month in the continent’s history (bureau statement, PDF), running an impressive 3.20°C (5.76°F) above average.  Many parts of Australia topped 35°C (95°F) at least once in August.  Brisbane hit highs in midwinter that it hadn’t reached even in the preceding summer.

As always, it’s critical to look beyond a single cool spell—or even a cool season over an entire region—to see what’s happening to our planet’s climate in full.