Bob Henson • March 18, 2013 | The past month has seen a remarkable run of challenging snow forecasts across the United States. From Denver to the Washington-Boston corridor, a series of winter storms brought millions of people either much more or much less snow than they expected—sometimes depending on which side of town they were on. But if predicting snow is a tough business (as we explored in our post of March 4), measuring it is no piece of cake either. 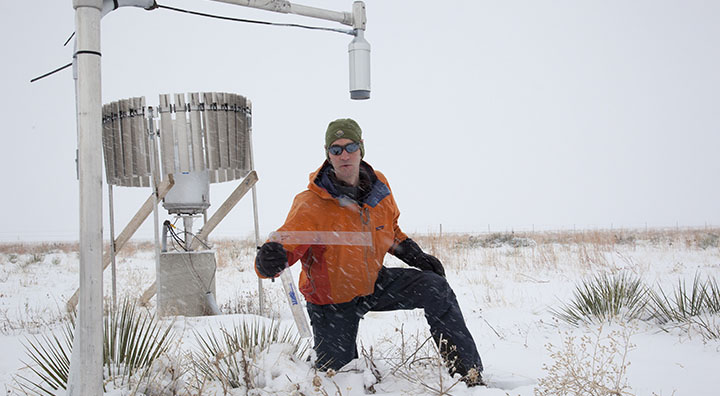 We took a close look at the pitfalls of snow measurement and some promising technologies in this 2011 AtmosNews story. Here, I’ll provide a few updates. You can dive deeper into the variables that shape snow accumulation in our interactive feature “Accumulated wisdom: How to measure snow.”

A fine line between snowy and sloppy

One reason why winter-storm forecasting and observing has been such a struggle lately is borderline temperatures. Sometimes significant amounts of snow will fall into surface air that’s close to, or even above, freezing. The common result: trees and lawns plastered with snow, but sidewalks and roads merely wet or slushy.

Given a patchwork like this, what exactly does it mean to say that “ten inches of snow fell today," especially if there’s little or no snow in sight where you are?

Every six hours, hundreds of U.S. observing stations report the amount of snow that’s fallen on a flat snowboard over that time span. The board, typically a plank of wood painted white, is then cleared for the next accumulation period. (Some experts are shifting toward the name “snow measuring board,” to avoid confusion with the winter recreation device.)

Also, at least every 24 hours, stations report the total amount of snow on the ground. This is usually done by measuring snow depth with a yardstick at several points within a few feet of a reporting station, then averaging the result.

It’s easy to see why the total snowpack on the ground probably won’t correspond precisely to the amounts measured on snowboards every six hours. For example:

It’s also easy to see why consistency in snow measurement is critical. When the pace of checking and clearing a snowboard goes up, the total snow measured in a given storm will go up as well, since there’s less time for the snow on the board to be compacted or to melt in between measurements. 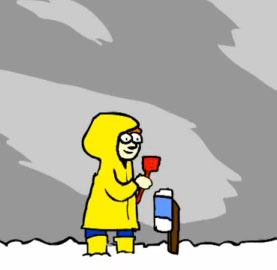 Engaging animations help the 15,000-plus volunteers with the Community Collaborative Rain, Hail, and Snow Network to sharpen their snow-measuring skills. (Image from “How to Measure New Snow Depth,” by Noah Besser/Parker Street, courtesy CoCoRaHS.)

Unfortunately, as we discussed in 2011, our nation’s snow climatology is checkered with inconsistency. Measurements have varied over the years by location, frequency, and technique, which can make it difficult for scientists to pin down long-term trends in snowfall.

Efforts such as the U.S. Climate Reference Network—a set of more than 100 gold-standard reporting stations across the nation—will be a substantial help going forward. More than 20,000 Americans are also pitching in through the National Weather Service’s Cooperative Observer Program and the Community Collaborative Rain, Hail and Snow Network, which uses animations and other materials to train volunteers in measuring snow depth and liquid content.

Still, when using snowfall data from years past, it can take careful research to unravel and correct for biases and errors. It’s also important to keep in mind that a record snowfall might be achieved more readily now than in the past because of the higher frequency of snow measurements in many locations.

There’s also been major progress in technologies that allow snow depth to be observed automatically.

NCAR’s Ethan Gutmann is among the scientists using lasers and GPS signals to assess snowpack in great detail over areas roughly 300 feet wide, or about the size of a football field. Within this area, the system can measure snow at more than 1,000 points in an hour’s time, assessing depths of up to ten feet with an accuracy of 0.5 inch or better.

Gutmann is hoping to find funding for a laser-based system that could provide such measurements over a much larger area, roughly a square mile. In the meantime, he’s investigating options for research in Antarctica and Colorado with a mid-sized laser system that could collect thousands of measurements per second over an area equivalent to a few city blocks, about 1,000 feet wide. 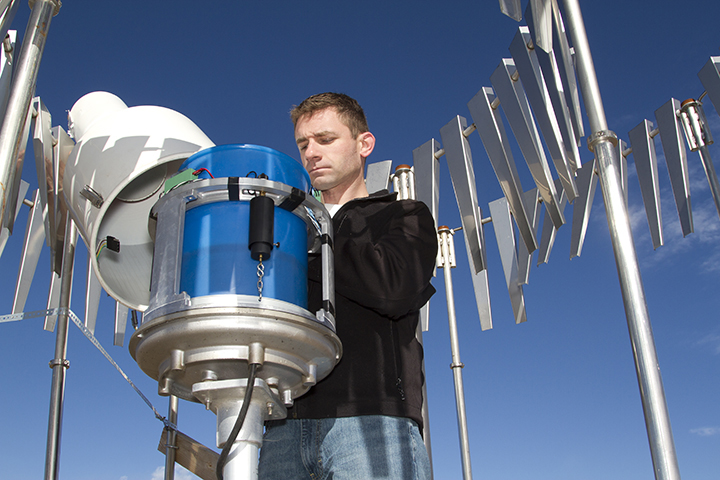 Scott Landolt checks one of several automated precipitation gauges at NCAR’s Marshall Field site. The circular metallic fence helps keep wind from blowing snow away from the gauge and distorting the measurements. (©UCAR. Photo by Carlye Calvin. This image is freely available for media & nonprofit use.)

Other automated systems can measure snowfall, and the amount of liquid within it, in situ (at a single point). Many of these gauges are put through their paces at NCAR’s Marshall Field Site. Here, various types of in-situ precipitation gauges are thoroughly tested, and customized fences and other windshields are evaluated for their ability to minimize wind effects on gauge measurements.

Roy Rasmussen and colleagues summarized their ongoing research (sponsored by NOAA, the Federal Aviation Administration, and NCAR) in a 2012 overview paper for the Bulletin of the American Meteorological Society.

“While some progress has been made, measuring snow remains a significant challenge,” notes the article. Among the hurdles:

This winter the World Meteorological Organization has been taking a closer look at automated snow measurement through its Solid Precipitation Intercomparison Experiment (WMO-SPICE). Participanting locations include the NCAR Marshall Field Site (including a NOAA Climate Reference Station there) as well as sites in Australia, Canada, Chile, Finland, Norway, Poland, Russia, Switzerland, and New Zealand.

The focus in WMO-SPICE on accurate detection of precipitation amount, intensity, and type, as well as the amount of snow actually on the ground—which, as noted, can be a very different animal.

John Cahir knows how difficult it can be to measure snow. He’s a retired meteorology professor from Pennsylvania State University who spends part of each year working on forecaster training modules with UCAR’s COMET Program. Cahir served as a weather observer at sea for the U.S. Navy and at Worcester, Massachusetts, in the 1960s for what was then the U.S. Weather Bureau (now the National Weather Service).

“Worcester was a really interesting place to observe snow,” says Cahir. The city’s official elevation is 480 feet, but the airport is at 1,000 feet. “It’s a windy site, and it tends to be colder than Boston, both because it’s at higher elevation and it’s about 40 miles inland.” Worcester’s long-term snowfall average is about 70 inches per year, compared to Boston’s 44 inches.

Snow measuring boards weren’t part of the observing process in Cahir’s day. “We took measurements strictly by going around with a ruler and sticking it into a representative number of spots,” he says. (Though no longer standard for measuring how much snow has fallen in a given period, this technique remains in use for measuring total snow cover, as noted in the main article above).

Drifting only made things worse, says Cahir: “There were times when it was very, very difficult to estimate what the snowfall really was.”

One fellow observer confessed to Cahir that he would sometimes call his wife in town—hundreds of feet below the airport—and ask her to take a more readily obtainable report from their own yard.