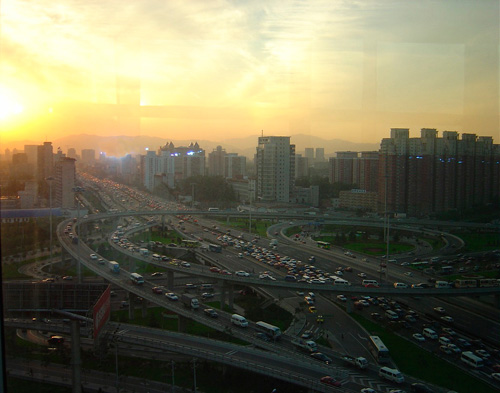 Beijing is one of the world's most heavily polluted cities. [ENLARGE] (©UCAR, photo by Richard Anthes.) News media terms of use*

BOULDER—In an attempt to create a favorable environment for this summer's Olympic Games in Beijing, Chinese officials hope to influence local weather conditions and air quality. They will use cloud seeding techniques to try to prevent rain during the opening ceremonies on August 8. They also will take aim at Beijing's air pollution by restricting emissions from cars and industrial facilities.

The National Center for Atmospheric Research (NCAR) has experts on weather modification and air quality who are available to comment on the likelihood that China's ambitious plans will succeed.

In addition, NCAR scientists will be part of an international team in Beijing generating very short-term forecasts, known as nowcasts. These forecasts will provide event coordinators with one-to-six-hour notices of local storms. The effort will also provide the nowcasting team with an opportunity to evaluate the accuracy of its forecasts.

One of the world's leading experts on weather modification, Bruintjes has helped design cloud seeding and other weather modification programs on every continent except Antarctica. His work focuses primarily on attempts to enhance rainfall in arid and semi-arid regions of the world, including ongoing projects in Wyoming, Australia, Turkey, the Middle East, and West Africa. He has consulted with Chinese experts about their programs in rainfall enhancement and prevention.

Brasseur is an NCAR associate director and the head of NCAR's Earth and Sun Systems Laboratory. An atmospheric chemist, he has extensively studied the movements of pollutants and other chemicals in the atmosphere.

Roberts specializes in the use of weather radars, satellites, and other advanced observational tools to improve short-term forecasts of thunderstorms and associated severe weather. She is leading an effort to implement thunderstorm nowcasting techniques into National Weather Service data analysis systems, which can help meteorologists better pin down the locations and timing of storms. Roberts will be in Beijing during the Olympics to run one of NCAR's nowcasting systems.

Wilson, a radar meteorologist with over 45 years of experience, will be in Beijing for the Olympics to demonstrate one of the thunderstorm nowcasting techniques he pioneered. Called the Auto-nowcaster, the technique blends numerical model and observational forecasting methods.