BOULDER—The National Hurricane Center will implement a new technique this summer, developed by researchers at the National Center for Atmospheric Research (NCAR) and the Naval Research Laboratory (NRL), to continually monitor landfalling storms in the United States. The system, which relies on existing coastal Doppler radars, provides details on hurricane winds and central pressure every six minutes, indicating whether a hurricane is gathering strength in its final hours before reaching shore. 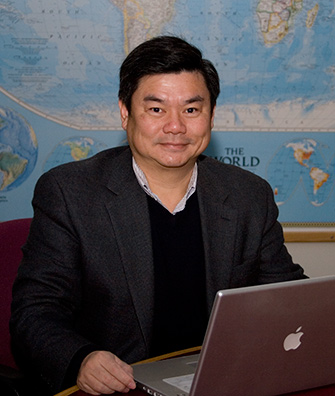 "VORTRAC will enable hurricane specialists, for the first time, to continually monitor the trend in central pressure as a dangerous storm nears land," says NCAR scientist Wen-Chau Lee. "With the help of VORTRAC, vulnerable communities can be better informed of sudden changes in hurricane intensity."

One of VORTRAC's strengths is that it can use radar data to estimate the barometric pressure at the center of a hurricane, a key measure of its intensity.

"VORTRAC allows us to take the wind measurements from the radar, turn the crank, and have a central pressure drop out of a calculation," says Colin McAdie, a meteorologist at NHC. "This will be a valuable addition to the tools available to the forecaster."

Rapidly intensifying storms can catch vulnerable coastal areas by surprise. Last year, Hurricane Humberto struck near Port Arthur, Texas, after unexpectedly strengthening from a tropical depression to a hurricane in less than 19 hours. In 2004, Hurricane Charley's top winds increased from 110 to 145 miles per hour (about 175 to 235 kilometers per hour) in just six hours as the storm neared Florida's southwest coast.

Lee and his collaborators applied VORTRAC retroactively to the two hurricanes and found that the technique would have accurately tracked their quick bursts in intensity.

"VORTRAC has demonstrated that it can capture sudden intensity changes in potentially dangerous hurricanes in the critical time period when these storms are nearing land," Bell says. 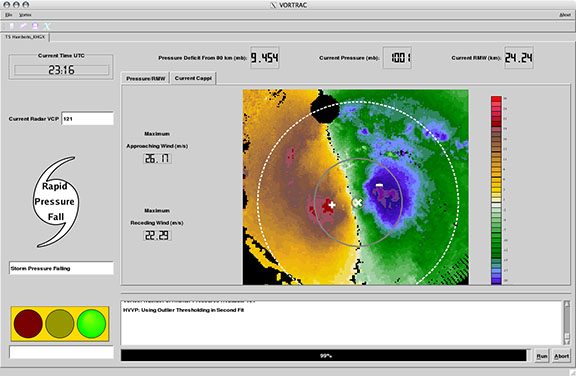 VORTRAC will provide forecasters at the National Hurricane Center with frequent, detailed updates on hurricanes as they approach land. The VORTRAC interface (above) includes a display of winds derived from Doppler radar data (right, with the hurricane center marked with an X), an estimate of the hurricane's central pressure (top), and a warning message that displays if the pressure is dropping rapidly (left). [ENLARGE] (Illustration courtesy Michael Bell, NCAR.) News media terms of use*

VORTRAC uses the Doppler radar network established by NOAA in the 1990s. About 20 of these radars are scattered along the Gulf and Atlantic coastlines from Texas to Maine. Each radar can measure winds blowing toward or away from it, but no single radar could provide an estimate of a hurricane's rotational winds and central pressure until now.

The VORTRAC team developed a series of mathematical formulas that combine data from a single radar near the center of a landfalling storm with general knowledge of Atlantic hurricane structure in order to map the approaching system's rotational winds. VORTRAC also infers the barometric pressure in the eye of the hurricane, a very reliable index of its strength. 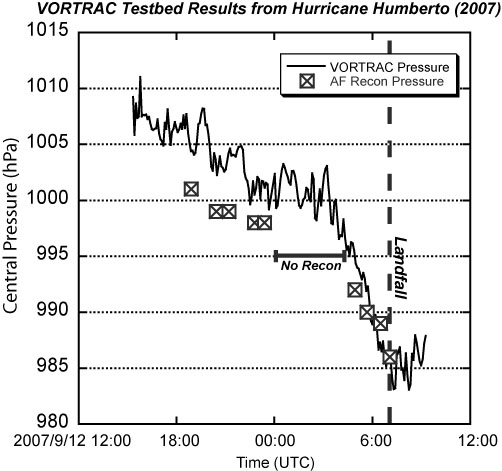 This display, from a test involving Hurricane Humberto (2007), shows the usefulness of the VORTRAC system. Humberto quickly intensified before striking near the Texas/Louisiana coast early on 13 September. The VORTRAC estimates agreed closely with Humberto's actual central pressure, as measured by Air Force reconnaissance planes just before landfall. VORTRAC also captured the storm's rapid intensification, indicating that the pressure began falling quickly near the end of a four-hour window when no aircraft data could be obtained. (Illustration courtesy Michael Bell, NCAR.) News media terms of use*

Forecasters using VORTRAC can update information about a hurricane each time a NOAA Doppler radar scans the storm, which can be as often as about every six minutes. Without such a technique, forecasters would need at least two coastal radars in close proximity to each other in order to obtain the same information. But most of the network's radars are too far apart to qualify.

Each radar can sample conditions out to about 120 miles. This means VORTRAC can track an incoming hurricane for at least several hours, and possibly even as long as a day or more, depending on the storm's speed, trajectory, and size.

To monitor the winds of a landfalling hurricane, forecasters now rely on aircraft to drop instrument packages into the storm that gather data on winds and pressure. Due to flight logistics, the aircraft can take readings no more than every hour or two, which means that a sudden drop in barometric pressure, and the accompanying increase in winds, may be difficult to anticipate.

In time, VORTRAC may also help improve long-range hurricane forecasts by using data from airborne Doppler radars or spaceborne radars to produce detailed information about a hurricane that is far out to sea. Forecasters could input the data to computer models to improve three- and five-day forecasts.

In addition, many nations along the Pacific Rim and Indian Ocean have their own emerging Doppler radar networks. Those nations, which are vulnerable to tropical cyclones, may also be able to make use of VORTRAC.