BOULDER—Taking part in the largest U.S. air quality field project in decades, the National Center for Atmospheric Research (NCAR) is working with partners to study pollution in the Southeast. The study looks at the impact of chemical reactions occurring between human-related pollution and volatile organic compounds (VOCs) emitted from vegetation. 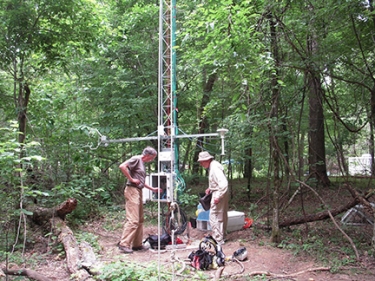 Scientists study air chemistry during the Southeast Atmosphere Study. (This image is freely available for media & nonprofit use.)

The project, the Southern Oxidant and Aerosol Study (SOAS), runs through July 15. It is part of an unprecedented five-project air quality field campaign.

Combined to leverage equipment and expertise, the five projects are together called the Southeast Atmosphere Study, or SAS. The largest U.S. air quality study in decades, SAS is supported by the National Science Foundation, Environmental Protection Agency, National Oceanic and Atmospheric Administration, and Electric Power Research Institute, with participants from about 30 U.S. and international research institutions.

It aims to uncover the controlling processes of biosphere-atmosphere interactions that affect air quality in the U.S. Southeast. It also seeks to uncover clues in the relationship between air chemistry and climate change. The Southeast, unlike much of the world, is experiencing a cooling trend.

Regional variations in a global atmosphere

Atmospheric chemists have long known that human-made pollutants have the potential to interact with plant-emitted VOCs, turning these hydrocarbons into airborne particles, or aerosols, that may then affect air quality and human health. More typically, however, regions have either high pollution levels and low plant-emitted VOC levels, or high plant-emitted VOC levels and less pollution, says NCAR scientist Alex Guenther, a SOAS principal investigator. This is less the case in the Southeast, where the aerosols resulting from the mixing of plant-generated VOCs with human-generated pollution also affect the region’s climate. 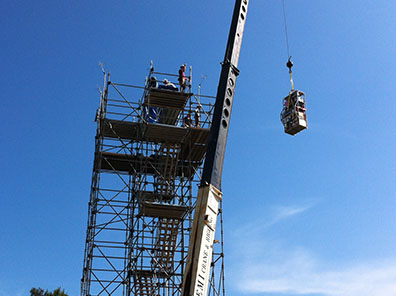 A team hoists 500 pounds of instrumentation belonging to Pennsylvania State University to the top of a 75-foot chemistry sampling tower at a SAS field project site in Brent, Alabama. (©UCAR, Photo by Jim Moore. This image is freely available for media & nonprofit use.)

“Black aerosols produced by industry, home heating, and transportation absorb incoming solar radiation, increasing global temperatures,” explains Guenther. “However, many of the lighter-colored aerosols, such as those composed of sulfates or organics from vegetation typical of the Southeast, have a cooling effect because they reflect some amount of incoming light back to space.”

“The Southeast Atmosphere Study will illuminate the role of the surface biosphere in producing volatile organic gases that can form new particles, known as secondary organic aerosol (SOA),” says Michael Morgan, National Science Foundation division director for atmospheric and geospace sciences. “The formation of SOA has been observed over many forested regions of the world, and the emissions of these gases may have an important influence on our changing climate.”

Some of the aerosols get carried high into the atmosphere, affecting the temperature over a large area. But many linger in the region where they were emitted, resulting in more localized impacts.

High concentrations of light-colored aerosols such as those expected in the Southeast can reduce the average temperature in that region, offsetting the warming caused by greenhouse gases circulating around the globe. But those same aerosols can trigger chemical reactions that worsen certain types of air pollution, such as ground-level ozone. Complicating matters further, certain types of aerosols affect cloud formation and cloud opacity, both of which can affect the amount of energy trapped in Earth’s atmosphere.

Although computer simulations can replicate some of the influences of aerosols, they can't yet produce the level of detail required for a complete understanding of these complex chemical and atmospheric dynamics, which would lead to more accurate predictions of future air quality and regional climate.

To address these questions and improve observations that may be used to expand the capabilities of climate and chemistry models, the team of SAS/SOAS investigators has brought an unprecedented suite of air sampling equipment and sensors to the region to characterize the chemistry happening in the atmosphere across the southeastern United States this summer. The project, which runs through July 15, is deploying two aircraft, the NSF/NCAR C-130 and the NOAA P-3, to sample air chemistry from the Mississippi River to the Atlantic Ocean, and from the Ohio River Valley to the Gulf of Mexico.

Additional teams of scientists are using ground instruments to measure low-level winds, moisture, temperature, and chemistry. Instrumented towers reaching nearly 150 feet (45 meters) into the air are taking measurements within and above forest canopies.

Additional aircraft and ground sensors deployed by companion programs in SAS will help flesh out the portrait of this unique region.