In search of 60-mile-high waves

May 21, 2014 | Not far from where parts of the “Lord of the Rings” trilogy were filmed, a stealthy player in atmospheric science will be under a different type of spotlight this summer. Novel instruments to be deployed in and near southern New Zealand will provide an unprecedented view of gravity waves, a vital atmospheric element little known by the public.

Gravity waves form when strong winds strike a large obstacle, such as a mountain range or a thunderstorm. With an effect similar to the rippling waves that spread after a rock is thrown into a lake, this wave of air can travel horizontally for hundreds of miles and vertically to the outer reaches of our atmosphere—more than 60 miles high. 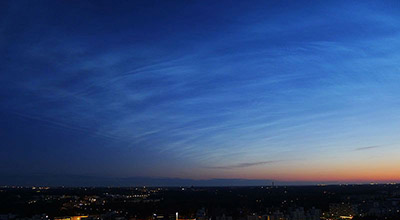 Composed of tiny water crystals at altitudes of around 50 miles (80 km), noctilucent clouds owe their existence to gravity waves that alter the polar summer mesosphere, making it the coldest region in Earth’s atmosphere. The clouds are only visible at dusk, when sunlight from below the horizon illuminates them. These noctilucent clouds took shape over Helsinki, Finland, on July 2, 2012. (Wikimedia Commons photo by Timo Newton-Syms.)

As the high-altitude waves “break,” somewhat like ocean waves on a beach, they can alter winds and temperatures in ways that influence weather at much lower altitudes.

In the stratosphere, gravity waves can produce polar stratospheric clouds that provide sites for ozone-depleting chemical reactions. Higher up, in the mesosphere and lower thermosphere, the waves modify the atmospheric tides that account for large daily variations of winds and temperatures. The waves can even affect the electromagnetic state of the ionosophere, where solar storm effects play out.

A lucky person might catch a glimpse of atmospheric gravity waves through Earth’s two highest-altitude cloud types: nacreous (polar stratospheric) and noctilucent. However, the waves themselves are difficult to track and analyze in detail without special equipment.

That’s where the DEEPWAVE field project comes in, deploying researchers and equipment in and near New Zealand this winter (during our Northern Hemisphere summer). NCAR’s Earth Observing Laboratory and university and lab partners in several nations want to find out how the waves evolve and how their influences can be better predicted.

“Right now, the effects of gravity waves are poorly understood and very poorly described in our weather and climate prediction models,” says David Fritts (GAT Inc.), one of the project’s four principal investigators.

“We devised DEEPWAVE to take advantage of new measurement capabilities,” Fritts adds. “If we can use our knowledge from DEEPWAVE to better understand gravity waves arising from sources over the entire planet, it will help contribute to better weather and climate forecasting in the future.”

HIAPER, the NSF/NCAR Gulfstream V aircraft, will serve as DEEPWAVE’s flight platform. The research jet will conduct up to 20 missions in June and July, flying at heights of up to 42,000 feet, in and near gravity waves triggered by the rugged Southern Alps on New Zealand’s South Island . The region between 40°S and 50°S is known as the “roaring forties,” with only Patagonia and New Zealand blocking winds that race from west to east. Flight managers will keep an eye out for severe turbulence, as well as temperatures that could dip below –94°F (–70°C) at flight levels.

“Our pilots have experience flying in all manner of atmospheric conditions,” notes NCAR project manager Jim Moore. “The challenge in DEEPWAVE is to fly above the mountains of Tasmania and New Zealand that can invigorate gravity waves.”

On the ground, NCAR is bringing a new wind profiler radar to DEEPWAVE that can track winds aloft at higher altitudes than ever before possible. “Our new modular wind profiler allows scalability to suit the needs of a particular experiment,” says NCAR project scientist Bill Brown. He, colleagues, and students from the United States and the University of Canterbury will operate the profiler and launch dozens of weather balloons from the windy, soggy west slopes of the Southern Alps, where many gravity waves are born. 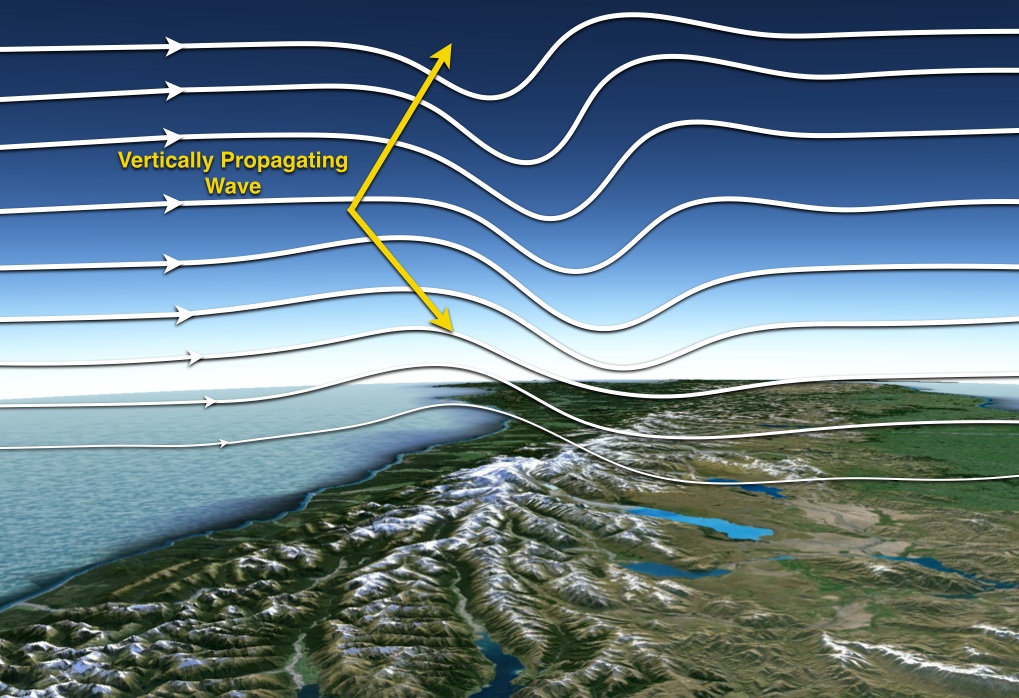 One of the most favored locations on Earth for the generation of atmospheric gravity waves is the South Island of New Zealand. As strong west-to-east winds strike the island’s mountains, a gravity wave can form and propagate vertically to heights of more than 60 miles (100 km). (Illustration @UCAR, by Alison Rockwell, NCAR Earth Observing Laboratory.)