Extreme downpours could increase fivefold across parts of the U.S.

BOULDER, Colo. — At century's end, the number of summertime storms that produce extreme downpours could increase by more than 400 percent across parts of the United States — including sections of the Gulf Coast, Atlantic Coast, and the Southwest — according to a new study by scientists at the National Center for Atmospheric Research (NCAR).

The study, published today in the journal Nature Climate Change, also finds that the intensity of individual extreme rainfall events could increase by as much as 70 percent in some areas. That would mean that a storm that drops about 2 inches of rainfall today would be likely to drop nearly 3.5 inches in the future.

"These are huge increases," said NCAR scientist Andreas Prein, lead author of the study. "Imagine the most intense thunderstorm you typically experience in a single season. Our study finds that, in the future, parts of the U.S. could expect to experience five of those storms in a season, each with an intensity as strong or stronger than current storms."

The study was funded by the National Science Foundation (NSF), NCAR's sponsor, and the Research Partnership to Secure Energy for America.

“Extreme precipitation events affect our infrastructure through flooding, landslides and debris flows,” said Anjuli Bamzai, program director in NSF’s Directorate for Geosciences, which funded the research.  “We need to better understand how these extreme events are changing. By supporting this research, NSF is working to foster a safer environment for all of us.” 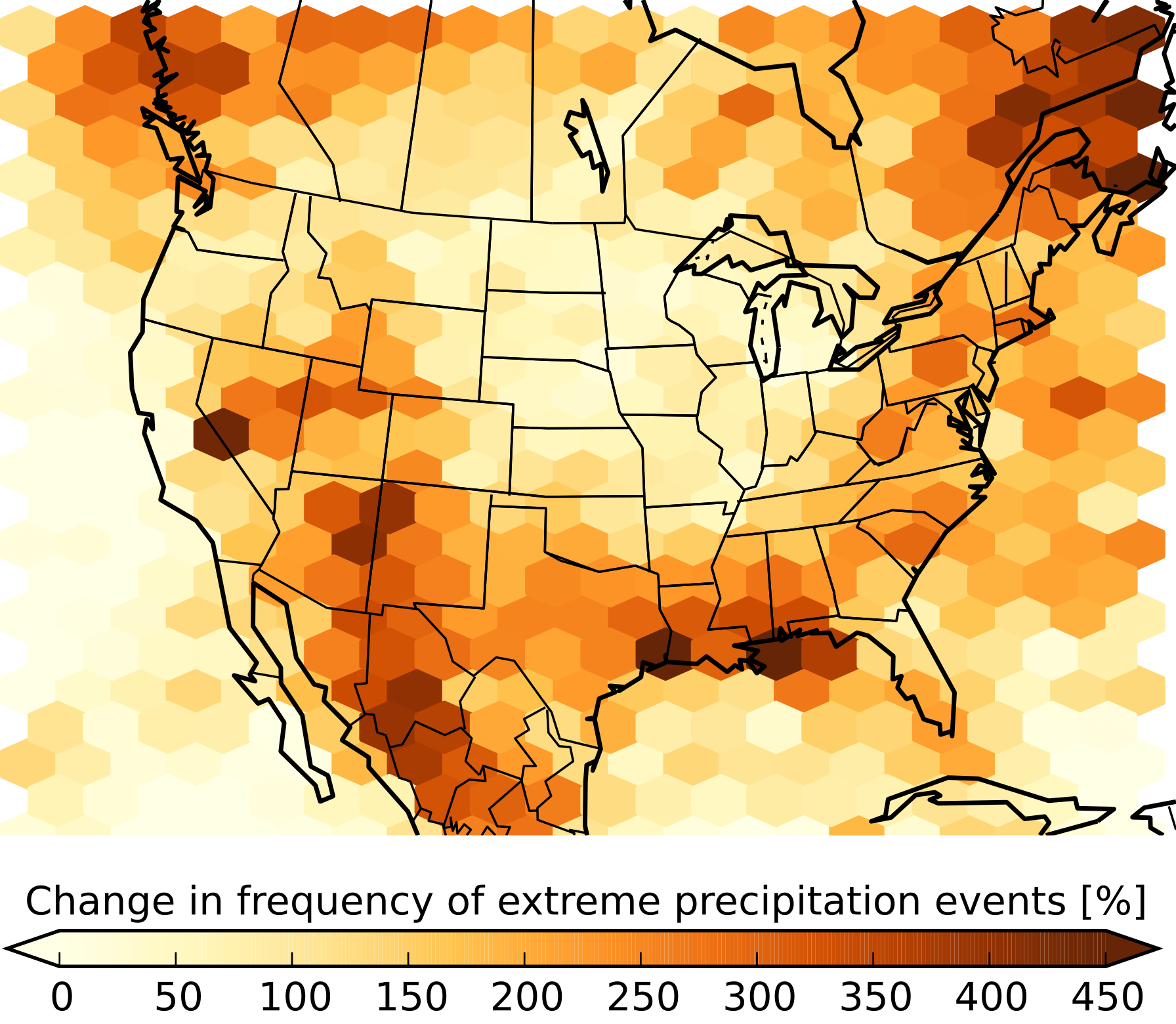 The figure shows the expected increase in the number of summertime storms that produce extreme precipitation at century's end compared to the period 2000 - 2013. (©UCAR. Courtesy Andreas Prein, NCAR. This image is freely available for media & nonprofit use.)

A year of supercomputing time

An increase in extreme precipitation is one of the expected impacts of climate change because scientists know that as the atmosphere warms, it can hold more water, and a wetter atmosphere can produce heavier rain. In fact, an increase in precipitation intensity has already been measured across all regions of the U.S. However, climate models are generally not able to simulate these downpours because of their coarse resolution, which has made it difficult for researchers to assess future changes in storm frequency and intensity.

For the new study, the research team used a new dataset that was created when NCAR scientists and study co-authors Roy Rasmussen, Changhai Liu, and Kyoko Ikeda ran the NCAR-based Weather Research and Forecasting (WRF) model at a resolution of 4 kilometers, fine enough to simulate individual storms. The simulations, which required a year to run, were performed on the Yellowstone system at the NCAR-Wyoming Supercomputing Center.

Prein and his co-authors used the new dataset to investigate changes in downpours over North America in detail. The researchers looked at how storms that occurred between 2000 and 2013 might change if they occurred instead in a climate that was 5 degrees Celsius (9 degrees Fahrenheit) warmer — the temperature increase expected by the end of the century if greenhouse gas emissions continue unabated.

Prein cautioned that this approach is a simplified way of comparing present and future climate. It doesn't reflect possible changes to storm tracks or weather systems associated with climate change. The advantage, however, is that scientists can more easily isolate the impact of additional heat and associated moisture on future storm formation.

"The ability to simulate realistic downpours is a quantum leap in climate modeling. This enables us to investigate changes in hourly rainfall extremes that are related to flash flooding for the very first time," Prein said. "To do this took a tremendous amount of computational resources."

Impacts vary across the U.S.

The study found that the number of summertime storms producing extreme precipitation is expected to increase across the entire country, though the amount varies by region. The Midwest, for example, sees an increase of zero to about 100 percent across swaths of Nebraska, the Dakotas, Minnesota, and Iowa. But the Gulf Coast, Alabama, Louisiana, Texas, New Mexico, Arizona, and Mexico all see increases ranging from 200 percent to more than 400 percent.

The study also found that the intensity of extreme rainfall events in the summer could increase across nearly the entire country, with some regions, including the Northeast and parts of the Southwest, seeing particularly large increases, in some cases of more than 70 percent.

A surprising result of the study is that extreme downpours will also increase in areas that are getting drier on average, especially in the Midwest. This is because moderate rainfall events that are the major source of moisture in this region during the summertime are expected to decrease significantly while extreme events increase in frequency and intensity. This shift from moderate to intense rainfall increases the potential for flash floods and mudslides, and can have negative impacts on agriculture.

The study also investigated how the environmental conditions that produce the most severe downpours might change in the future. In today's climate, the storms with the highest hourly rainfall intensities form when the daily average temperature is somewhere between 20 and 25 degrees C (68 to 77 degrees F) and with high atmospheric moisture. When the temperature gets too hot, rainstorms become weaker or don't occur at all because the increase in atmospheric moisture cannot keep pace with the increase in temperature. This relative drying of the air robs the atmosphere of one of the essential ingredients needed to form a storm.

In the new study, the NCAR scientists found that storms may continue to intensify up to temperatures of 30 degrees C because of a more humid atmosphere. The result would be much more intense storms.

"Understanding how climate change may affect the environments that produce the most intense storms is essential because of the significant impacts that these kinds of storms have on society," Prein said.