The supercomputing center has been a catalyst

UCAR President Antonio J. Busalacchi co-wrote this perspective about the NCAR-Wyoming Supercomputing Center with Randy Bruns (CEO of the Cheyenne-Laramie County Corporation for Economic Development) and William A. Gern (vice president for research and economic development at the University of Wyoming). The Cheyenne Tribune Eagle on March 28 published it as a guest column (subscription required).

March 27, 2017 | With the recent news that the NCAR-Wyoming Supercomputing Center (NWSC) has acquired a new supercomputer that is three times faster than its predecessor, this is a good time to consider how much the center has contributed to Wyoming.

The NWSC opened its doors in Cheyenne in October 2012 as one of the premier facilities for science in the United States. Operated by the National Center for Atmospheric Research (NCAR), its key goals included accelerating scientific discovery nationwide, powering economic development in the Cheyenne area, expanding research and computing expertise at the University of Wyoming and improving technology education across the state. 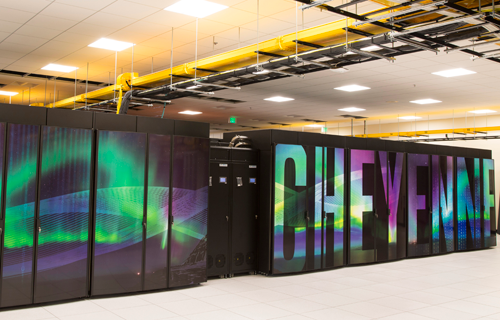 The new Cheyenne supercomputer at the NCAR-Wyoming Supercomputing Center (©UCAR. Photo by Carlye Calvin. This image is freely available for media & nonprofit use.)

We're pleased to report major progress on all these fronts.

The incredible power of the center's supercomputers enables scientists to glean new insights about our planet in ways that support its mission of saving lives, increasing U.S. economic competitiveness, and strengthening national security. One of the more exciting developments, for example, is how researchers at NCAR and partners from research universities, federal labs, and the private sector are using it to improve the prediction of weather patterns months in advance. That's the kind of intelligence that is vital to farmers, energy producers, shipping companies, and other planners in nearly every economic sector.

In addition to its role in national research, the NWSC is producing at least three significant benefits here in Wyoming.

First, it has emerged as a catalyst for economic development projects. After the NWSC opened, Microsoft committed to a significant data center complex next door, and EchoStar and Green House Data expanded their operations in Cheyenne. A small network of IT support companies has sprung up around them. The result: hundreds of new, high-paying jobs that have helped to insulate the region from the ups and downs of the energy industry.

Second, the NWSC has helped propel UW into the upper ranks of research universities. The university has added cutting-edge science and technology classes and attracted top-flight professors from across the country. UW professors and students have priority access to the supercomputer, and they are conducting landmark research into such important topics as traditional and renewable energy, earthquakes, and wildfires.

Third, it has improved technology education around the state. UW and NCAR have trained close to 100 Wyoming high school teachers to create lessons based on inexpensive miniature computers. Their students use them to write innovative software and run science experiments. Building on this success, UW is now embarking on a statewide initiative to help teachers in every high school get certified in computer science. Related efforts are also reaching adults, such as mid-career workers who need IT skills to make sure they remain competitive in the ever-changing job market.

Well before the state's recent economy downturn, Wyoming began using technology to make inroads in diversifying its economy, aided by the presence of the NWSC. Thanks to access to world-class computing resources and increasingly sophisticated training, Wyoming is expanding technological opportunities for our youth within the state, starting with thousands of schoolchildren as young as first graders who have gotten their initial taste of supercomputing by touring the NWSC.

The benefits have gone both ways. Designed for high-performance computing from the ground up, the NWSC provides NCAR with a reliable and energy-efficient home for systems that include high-speed data transfer, visualization, and storage. Scientists at NCAR and more than 100 university partners across the country have engaged in research that was never before possible, such as generating high-resolution simulations of the Sun that will help society better predict "space weather" — the powerful solar storms that periodically threaten orbiting satellites, global communications, and even the nation's electrical grid.

When the NWSC opened, its flagship Yellowstone supercomputer ranked among the fastest in the world, capable of performing about 1.5 quadrillion calculations per second. This incredible computing power helped scientists across the country answer key questions about energy production and improve predictions of tornadoes, droughts, floods, and other natural hazards.

Now the new NWSC supercomputer, named Cheyenne, more than triples that supercomputing capability. Ranked as the 20th fastest supercomputer in the world—and the fastest in the Mountain West—it will enable researchers to further expand the frontier of scientific knowledge.

The NWSC was born from an innovative, public-private partnership that included the state of Wyoming; University of Wyoming; Cheyenne LEADS; Black Hills Energy; NCAR; the National Science Foundation, which sponsors NCAR; and the University Corporation for Atmospheric Research, which manages NCAR on behalf of the National Science Foundation. In less than five years of operation, it has already demonstrated the wisdom of that partnership.

We are proud that the NWSC has spurred economic and educational benefits throughout Wyoming, while accelerating research across the United States. The NWSC has established itself as one of the leading supercomputing centers in the world, and we look forward to many more years of exciting research, education, and economic opportunity for the state of Wyoming and the nation.