The climate secrets of southern clouds

BOULDER, Colo. — This month, an international team of scientists will head to the remote Southern Ocean for six weeks to tackle one of the region's many persistent mysteries: its clouds.

What they discover will be used to improve climate models, which routinely underestimate the amount of solar radiation reflected back into space by clouds in the region. Accurately simulating the amount of radiation that is absorbed or reflected on Earth is key to calculating how much the globe is warming.

The field campaign, called the Southern Ocean Clouds, Radiation, Aerosol Transport Experimental Study, or SOCRATES, could also help scientists understand the very nature of how clouds interact with aerosols — particles suspended in the atmosphere that can be from either natural or human-made sources. Aerosols can spur cloud formation, change cloud structure, and affect precipitation, all of which affect the amount of solar radiation that is reflected.

During the mission, which will run from mid-January through February, the scientists will collect data from a bevy of advanced instruments packed onboard an aircraft and a ship, both of which are specially designed for scientific missions.

"SOCRATES will allow for some of the best observations of clouds, aerosols, radiation, and precipitation that have ever been collected over the Southern Ocean," said Greg McFarquhar, a principal investigator and the director of the University of Oklahoma Cooperative Institute for Mesoscale Meteorological Studies (CIMMS). "These data will provide us with critical insight into the physics of cloud formation in the region, information we can use to improve global climate models."

The U.S. portion of SOCRATES is largely funded by the National Science Foundation (NSF).

“The Southern Ocean is famously remote and stormy and it's hard to imagine a worse place to do a field campaign. But a vast, stormy ocean is a great laboratory for studying clouds, and it's clear from our models that we have a lot to learn about them,” said Eric DeWeaver, program director for Climate and Large-Scale Dynamics in NSF’s Geoscience directorate.

"I'm excited about this campaign because I think it will answer some fundamental questions about clouds and their dependence on atmospheric conditions," DeWeaver said. "We'll be able to use this information to understand cloud behavior closer to home and how clouds are likely to adjust to changing climatic conditions."

Critical observing and logistical support for SOCRATES is being provided by the Earth Observing Laboratory (EOL) at the National Center for Atmospheric Research (NCAR). Other U.S. principal investigators are based at the University of Washington.

The Australian portion of SOCRATES is largely funded by the country's government through the Australian Marine National Facility, which is owned and operated by CSIRO.

McFarquhar and his colleagues think the reason that climate models are not accurately capturing the amount of radiation reflected by clouds above the Southern Ocean is because they may not be correctly predicting the composition of the clouds. In particular, the models may not be producing enough supercooled water — droplets that stay liquid even when the temperature is below freezing.

One possible explanation for the problem is the way models represent how clouds interact with aerosols, a process that affects the amount of supercooled water in a cloud. These representations were developed from atmospheric observations, largely in the Northern Hemisphere, where most of the world's population lives.

"We don't know how appropriate the representations of these processes are for the Southern Hemisphere," McFarquhar said. "SOCRATES will give us an opportunity to observe these cloud-aerosol interactions and see how much they differ, if at all, from those in the Northern Hemisphere." 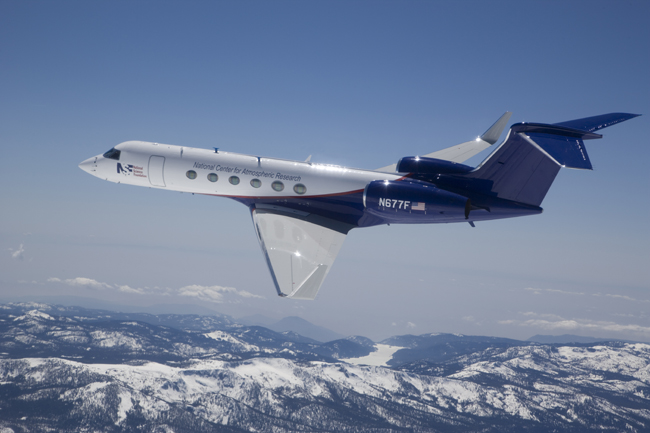 The NSF/NCAR HIAPER Gulfstream V has been modified to serve as a flying laboratory. (©UCAR. This figure is freely available for media & nonprofit use.)

For the SOCRATES field campaign, observations will be taken from the NSF/NCAR High-performance Instrumented Airborne Platform for Environmental Research, or HIAPER, a highly modified Gulfstream V aircraft, and the R/V Investigator, an Australian deep-ocean research vessel.

"Much of what we currently know about Southern Ocean cloud, aerosol, and precipitation properties comes from satellite-based estimates, which are uncertain and have undergone few comparisons against independent data," said co-investigator Roger Marchand, a scientist at the University of Washington. "The data collected during SOCRATES will also enable us to evaluate current satellite data over the Southern Ocean, as well as potentially help in the design of better satellite-based techniques."

The research aircraft will be based out of Hobart, Tasmania, and will make about 16 flights over the Southern Ocean during the course of the campaign. The many high-tech instruments on board will measure the size and distribution of cloud droplets, ice crystals, and aerosols, as well as record the temperature, winds, air pressure, and other standard atmospheric variables.

The instruments include NCAR's HIAPER Cloud Radar (HCR) and High Spectral Resolution Lidar (HSRL). The wing-mounted HCR is able to "see" inside clouds and characterize the droplets within, while the HSRL can measure air molecules and aerosols. Together, the two highly advanced instruments will give scientists a more complete picture of the wide range of particles in the atmosphere above the Southern Ocean.

The nature of the research — flying a plane in search of supercooled water —presents some challenges with aircraft icing.

"Oftentimes, the cleaner the air, the more probable large drops and severe icing conditions become," said Cory Wolff, the NCAR project manager who is overseeing aircraft operations for SOCRATES. "We have a number of precautions we're taking to mitigate that risk."

First, a mission coordinator whose sole job is to monitor icing conditions will join each flight. Second, the design of the flights themselves will help the crew anticipate icing conditions before they have to fly through them. On the flight south from Tasmania, the HIAPER GV will fly high above the clouds — and the icing danger. During that leg of the flight, the scientists will collect information about the clouds below, both with onboard radar and lidar as well as with dropsondes — small instrument packages released from the aircraft.

With that information, the scientists can determine whether it's safe to pilot the aircraft through the clouds on the return trip, collecting detailed information about the cloud composition. 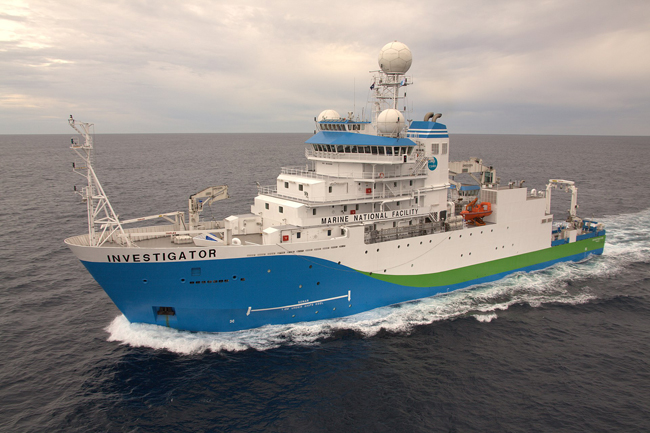 The Australian R/V Investigator will take measurements of the atmosphere and ocean during its six-week voyage. (Image courtesy CSIRO.)

The measurements taken from the sky will be complemented by data collected from instruments on board the Australian R/V Investigator, including the NCAR Integrated Sounding System. The ISS gathers extensive data by using a radar wind profiler, surface meteorology sensors, and a balloon-borne radiosonde sounding system. The team will launch soundings every six hours, and sometimes more often, throughout the campaign.

"Observations from the ship will help us understand the background state of the atmosphere — how it's behaving," said NCAR scientist Bill Brown, who traveled to Australia in late November to prepare the ISS for the voyage.

The ship will be deployed for the entire six weeks and will face its own challenges, notably the notorious roughness of the Southern Ocean, sometimes called the stormiest place on Earth.

"There are no land masses to break up the winds down there," Brown said. "So the ocean can be quite rough."

SOCRATES investigators will also draw on measurements from another Australian ship as it travels between Tasmania and Antarctica on resupply missions, the R/V Aurora Australis, as well as observations from buoys and some land-based instruments on Macquarie Island.

For more about the SOCRATES campaign, visit the project website.

Australian Department of Environment and Energy

University of Illinois at Urbana-Champaign