Honor called the 'Nobel Prize for the environment'

The 2019 Tyler Prize for Environmental Achievement – often described as the "Nobel Prize for the environment" – has been awarded to climate scientists Warren Washington of the National Center for Atmospheric Research (NCAR) and Michael Mann of Pennsylvania State University.

Washington is a distinguished scholar at NCAR whose pioneering work on global climate models has influenced decades of research into climate change. Mann, a distinguished professor of atmospheric science at Penn State, pioneered statistical techniques to reconstruct past global temperatures and demonstrate the unprecedented pattern of recent temperature increases.

NCAR is managed by the University Corporation for Atmospheric Research (UCAR), a nonprofit consortium of 117 universities, including Penn State, on behalf of the National Science Foundation.

"All of society owes a deep debt of gratitude to these two trailblazing scientists," said UCAR President Antonio Busalacchi. "I am thrilled to see the Tyler Prize honor their crucial contributions to climate science and their tireless dedication to communicating this research to policymakers and the public."

“The Tyler Prize Executive Committee is honored to recognize two outstanding scientists, who have not only advanced our knowledge of climate change but also demonstrated exceptional courage and commitment to public policy,” said Julia Marton-Lefèvre, Tyler Prize Chair.

On May 2, Mann and Washington will deliver a public lecture on their work at the Mission Bay Conference Center in San Francisco. The Tyler Prize Executive Committee and the international environmental community will honor the two laureates during a private ceremony the next day. Update: The committee published a short video profile of the new laureates featuring remarks by colleagues and community leaders on May 4. 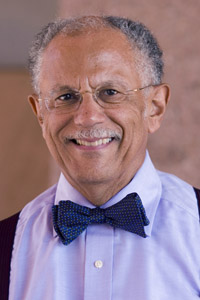 Washington, who began work at NCAR in 1963, was one of the first scientists to use the laws of physics to develop computer models of global climate, simulating processes in the atmosphere, oceans, sea ice, and land surface to develop projections of past and future climate change. Working with early mainframe computers with creaky processing speeds compared to modern systems, he collaborated with NCAR scientist Akira Kasahara to develop the first generation of global climate models, which remain the basis of the simulations that scientists today run on some of the world's most advanced supercomputers.

A former president of the American Meteorological Society, Washington has received multiple awards, among them the National Medal of Science, presented by President Barack Obama in 2010. Washington has written over 150 published papers, working with such collaborators as NCAR scientist Gerald Meehl on pioneering studies of climate model performance and climate change. He also co-authored, with Clair Parkinson of NASA Goddard, An Introduction to Three-Dimensional Climate Modeling, which has been described by his peers as “literally the book on climate modeling.”

As the second African-American to be awarded a Ph.D. in meteorology, Washington's scientific leadership has been an inspiration to people of color and other minorities not only in atmospheric science, but in the larger science community as well. 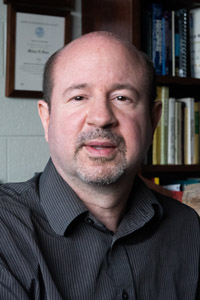 To reconstruct Earth's climate prior to human records, Mann pioneered the use of "climate proxy data" – including ice cores, tree rings, and lake sediments – to estimate global temperatures more than 1,000 years into the past. His analysis, showing the extent to which Earth’s climate was getting warmer, produced a pattern known as the "hockey stick" because of the sharp, recent increase in temperatures following a long, relatively stable period.

The hockey stick became highly controversial and Mann faced considerable criticism and legal attacks. Rather than retreat into his work, Mann focused more of his efforts on making climate change accessible to the public. He has advised well-known public figures who have spoken out on the importance of climate change, including Leonardo DiCaprio, Jerry Brown, and Bill Nye.

Mann has written four books, as well as numerous op-eds and commentaries. He is the co-founder of RealClimate.org, an award-winning climate change website. At Penn State, he has joint appointments in the Department of Geosciences and in the Earth and Environmental Systems Institute, and as the director of the Penn State Earth System Science Center.

The Tyler Prize is awarded to recognize the scientific contributions and leadership of environmental problem solvers, and to inspire others to follow in their footsteps. It has been administered by the University of Southern California since 1981.