BOULDER—Scientists are deploying an advanced research aircraft to study a region of the atmosphere that influences climate change by affecting Earth's thermal balance. Findings from the project, based at the National Center for Atmospheric Research (NCAR), will be used by researchers worldwide to improve computer models of global climate in preparation for the next report by the Intergovernmental Panel on Climate Change (IPCC). 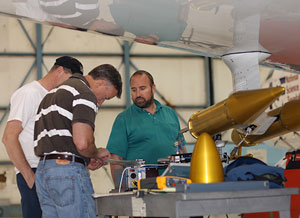 Technicians at NCAR's Research Aviation Facility in Boulder check the response of aerosol instruments mounted under the wing of the NSF/NCAR Gulfstream-V. The instruments sample air in the tropopause, at the boundary between the lower atmosphere and the stratosphere, to determine the movements and concentrations of gases. [ENLARGE] (©UCAR, photo by Carlye Calvin.) News media terms of use*

The project, which runs from April to June, is known as START 08 (Stratosphere-Troposphere Analyses of Regional Transport). It focuses on the tropopause, which is the boundary between the troposphere (lower atmosphere) and the stratosphere. Scientists are increasingly interested in the tropopause, because of both its importance in the global climate system and because the buildup of greenhouse gases has altered this atmospheric region in ways that are not yet fully understood. 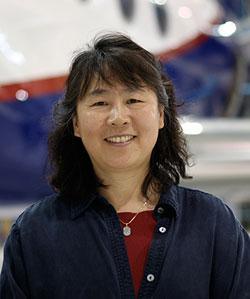 The research team is deploying the NSF/NCAR Gulfstream-V, a modified jet aircraft with high-altitude capabilities that will fly about a dozen missions across much of North America, ranging up to about 47,000 feet high. The flight paths will take the jet's cutting-edge sensors through the top of the troposphere, which is the lowest layer of the atmosphere, and into the stratosphere. Focusing on the tropopause, the boundary between these two layers, scientists will take samples of air to determine the movements and concentrations of a number of gases. One of their goals is to learn more about water vapor and ozone, which act as potent greenhouse gases by trapping thermal radiation in the atmosphere, thereby warming the planet.

The altitude of the tropopause varies from 32,000 to 56,000 feet, with the highest part lying above the tropics. It is challenging territory for scientists because it is too high to observe with most ground-based instruments or most aircraft, and too low for satellites to view with great detail. Moreover, its altitude has changed in recent years as a result of global warming. As Earth's tropical regions have expanded, the highest part of the tropopause has extended farther north and south. 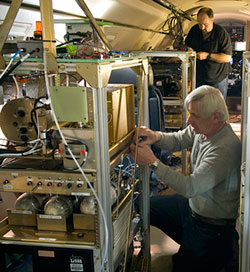 NCAR technicians aboard the NSF/NCAR Gulfstream-V, also known as the High-performance Instrumented Platform for Environmental Research, prepare instruments for measuring carbon monoxide and ozone during the START 08 field project. [ENLARGE] (©UCAR, photo by Carlye Calvin.) News media terms of use*

"We want to collect data that will help map out the chemical composition of this dynamic boundary region," says Elliot Atlas, a principal investigator on the project and professor of marine and atmospheric chemistry at the University of Miami. "This is a complex area, where naturally occurring gases and particles mix with pollutants from human activities in ways that can ultimately affect the weather and climate of our planet."

Critical data for the IPCC

Over the next two years, climate scientists will use observations from START and other sources to adjust computer models that simulate Earth's climate. These models will be used for the next round of IPCC reports, which are likely to be issued in about 2012. The IPCC, a recipient of the Nobel Peace Prize, operates under the auspices of the United Nations Environment Programme and the World Meteorological Organization.

"Understanding the tropopause region is particularly challenging because it involves interactions of winds and atmospheric motion with chemistry, clouds, and solar radiation," says Kenneth Bowman, a principal investigator on the project and professor of atmospheric science at Texas A&M University. "Properly representing this part of the atmosphere in global climate models requires getting all of these complex components correct. The Gulfstream-V aircraft allows us to directly observe many of these processes in place, providing a level of detail that cannot be matched by ground-based or satellite observations."