BOULDER, Colo. — As the National Oceanic and Atmospheric Administration (NOAA) this month launches a comprehensive system for forecasting water resources in the United States, it is turning to technology developed by the National Center for Atmospheric Research (NCAR) and its university and agency collaborators.

WRF-Hydro, a powerful NCAR-based computer model, is the first nationwide operational system to provide continuous predictions of water levels and potential flooding in rivers and streams from coast to coast. NOAA's new Office of Water Prediction selected it last year as the core of the agency's new National Water Model.

"WRF-Hydro gives us a continuous picture of all of the waterways in the contiguous United States," said NCAR scientist David Gochis, who helped lead its development. "By generating detailed forecast guidance that is hours to weeks ahead, it will help officials make more informed decisions about reservoir levels and river navigation, as well as alerting them to dangerous events like flash floods." 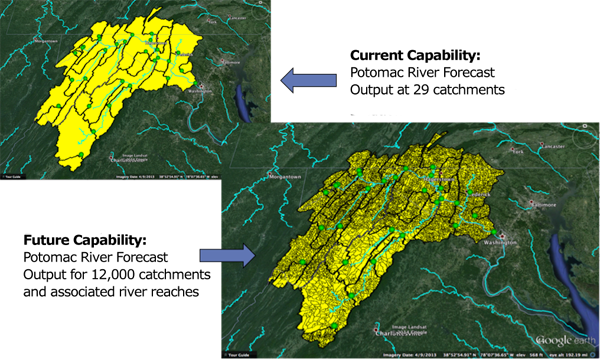 The new WRF-Hydro computer model simulates streams and other aspects of the hydrologic system in far more detail than previously possible. (Image by NOAA Office of Water Prediction.)

Unlike past streamflow models, which provided forecasts every few hours and only for specific points along major river systems, WRF-Hydro provides continuous forecasts of millions of points along rivers, streams, and their tributaries across the contiguous United States. To accomplish this, it simulates the entire hydrologic system — including snowpack, soil moisture, local ponded water, and evapotranspiration — and rapidly generates output on some of the nation's most powerful supercomputers.

WRF-Hydro was developed in collaboration with NOAA and university and agency scientists through the Consortium of Universities for the Advancement of Hydrologic Science, the U.S. Geological Survey, Israel Hydrologic Service, and Baron Advanced Meteorological Services. Funding came from NOAA, NASA, and the National Science Foundation, which is NCAR's sponsor.

"WRF-Hydro is a perfect example of the transition from research to operations," said Antonio (Tony) J. Busalacchi, president of the University Corporation for Atmospheric Research, which manages NCAR on behalf of the National Science Foundation (NSF). "It builds on the NSF investment in basic research in partnership with other agencies, helps to accelerate collaboration with the larger research community, and culminates in support of a mission agency such as NOAA. The use of WRF-Hydro in an operational setting will also allow for feedback from operations to research. In the end this is a win-win situation for all parties involved, chief among them the U.S. taxpayers."

"Through our partnership with NCAR and the academic and federal water community, we are bringing the state of the science in water forecasting and prediction to bear operationally," said Thomas Graziano, director of NOAA’s new Office of Water Prediction at the National Weather Service.

Filling in the water picture

The continental United States has a vast network of rivers and streams, from major navigable waterways such as the Mississippi and Columbia to the remote mountain brooks flowing from the high Adirondacks into the Hudson River. The levels and flow rates of these watercourses have far-reaching implications for water availability, water quality, and public safety.

Until now, however, it has not been possible to predict conditions at all points in the nation's waterways. Instead, computer models have produced a limited picture by incorporating observations from about 4,000 gauges, generally on the country's bigger rivers. Smaller streams and channels are largely left out of these forecast models, and stretches of major rivers for tens of miles are often not predicted — meaning that schools, bridges, and even entire towns can be vulnerable to unexpected changes in river levels.

To fill in the picture, NCAR scientists have worked for the past several years with their colleagues within NOAA, other federal agencies, and universities to combine a range of atmospheric, hydrologic, and soil data into a single forecasting system.

The resulting National Water Model, based on WRF-Hydro, simulates current and future conditions on rivers and streams along points two miles apart across the contiguous United States. Along with an hourly analysis of current hydrologic conditions, the National Water Model generates three predictions: an hourly 0- to 15-hour short-range forecast, a daily 0- to 10-day medium-range forecast, and a daily 0- to 30-day long-range water resource forecast.

The National Water Model predictions using WRF-Hydro offer a wide array of benefits for society. They will help local, state, and federal officials better manage reservoirs, improve navigation along major rivers, plan for droughts, anticipate water quality problems caused by lower flows, and monitor ecosystems for issues such as whether conditions are favorable for fish spawning. By providing a national view, this will also help the Federal Emergency Management Agency deploy resources more effectively in cases of simultaneous emergencies, such as a hurricane in the Gulf Coast and flooding in California.

"We've never had such a comprehensive system before," Gochis said. "In some ways, the value of this is a blank page yet to be written."

A broad spectrum of observations

WRF-Hydro is a powerful forecasting system that incorporates advanced meteorological and streamflow observations, including data from nearly 8,000 U.S. Geological Survey streamflow gauges across the country. Using advanced mathematical techniques, the model then simulates current and future conditions for millions of points on every significant river, stream, tributary, and catchment in the United States.

In time, scientists will add additional observations to the model, including snowpack conditions, lake and reservoir levels, subsurface flows, soil moisture, and land-atmosphere interactions such as evapotranspiration, the process by which water in soil, plants, and other land surfaces evaporates into the atmosphere.

Scientists over the last year have demonstrated the accuracy of WRF-Hydro by comparing its simulations to observations of streamflow, snowpack, and other variables. They will continue to assess and expand the system as the National Water Model begins operational forecasts.

NCAR scientists maintain and update the open-source code of WRF-Hydro, which is available to the academic community and others. WRF-Hydro is widely used by researchers, both to better understand water resources and floods in the United States and other countries such as Norway, Germany, Romania, Turkey, and Israel, and to project the possible impacts of climate change.

"At any point in time, forecasts from the new National Water Model have the potential to impact 300 million people," Gochis said. "What NOAA and its collaborator community are doing is trying to usher in a new era of bringing in better physics and better data into forecast models for improving situational awareness and hydrologic decision making."